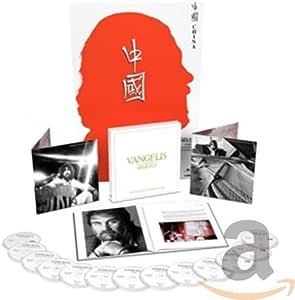 Kon-Tiki
5つ星のうち4.0 Fine art in deluxe presentation
2017年2月12日に英国でレビュー済み
Amazonで購入
The Delectus box set contains approximately 30% of Vangelis’ original albums and major collaborations, from the first/mid part of his career. It has the majority of his Nemo-period recordings, which many consider his most creative and influential period. To me, the albums featured in this set have been “bread of life” for decades, so to say. If I reviewed Delectus just based on how good this music is, it would be five stars without any doubt.

This set however is probably more intended for the completists, as the remastered albums are not available separately. Thus, the question is how much extra value does this set provide for its pretty high cost. My judgement is: quite a lot. Opening the box, it becomes strikingly obvious that Universal aimed for delivering a worthy presentation of these now-classic discs. The engraved white box, the 100 (not 64!) page book inside, the placement of the disks in the gatefold sleeves all scream quality. The book itself marks the first opportunity to have so much Vangelis-related printed material in outstanding quality. Not only it provides many photos and some short background to each album, but replicates the original album sleeves (at least the front side) in LP size.

Most of the remastered albums sound warmer, fuller than the old CDs, just as if we were listening to our good old LPs again. It might be due to some extra reverb added (elsew.com describes sound quality album by album), but I must say that it works for me well in most cases. Also, the tracks have been equalized, so for example the second half of the great track Suffocation is more audible, the end of the Deliverance track is less shouting, I’ll Find My Way Home starts louder etc.

At the first glance it might seem annoying however that all albums are shorter than the previous CD versions. Sometimes the difference is just a few seconds, sometimes even a minute. The reason is that Delectus largely eliminates the gaps between the tracks, as well as the fade ins and outs are shortened. Vangelis must have followed a concept to make the music more flowing by removing the hardly/not audible parts. I took the track Multi-Track Suggestion for testing such differences, as it is 10 seconds shorter according to Windows Media Player than the original CD version I have. I found that it is because the 4-second gap between this track and Memories of Green is removed, fade-in is 2 seconds shorter, fade out is also 4 seconds faster. All in all, the remastered albums seem to stay closer to the original LP track time indications. Exceptionally however these edits remove real substance, which is the case for the tracks Song of White (the reprise of the Antarctica theme is shortened) and Soil Festivities Movement 1 (raining and thundering are cut from the end) – these truncations don’t meet my acceptance at all.

What was known already at the time of announcing Delectus: it contains only 4 tracks previously unreleased on CD (but well-known to fans), totalling about 18 minutes, which is very little for such a mammoth 13-disc set. One of them is the long-awaited “Song is” which is now available on CD 34 years after the vinyl single release. The other extra tracks were outtakes from the See You Later album, and now that they are appended, I must say they don’t make the album any more complete. A much better outtake, Fertilization, remains unreleased sadly. Vangelis’ fans are aware of lots of great music from the 1973-85 period that never actually surfaced on any of his official albums. Delectus could have been a good opportunity to do some justice with that music, but Vangelis or Universal must have thought differently. The Themes compilation from 1989 is the proof that it would have been possible, in fact that album contained more previously unreleased tracks from these years than the whole Delectus set. Not only additional music I miss, but curiously the album La Fete Sauvage is not found in the set, although it is a proper Polydor album from 1976 which really needed remastering. I hope that it will be also remastered over time, together with Ignacio and 666 (all are in Universal’s hands), completing the list of remastered Vangelis albums from the 70s and 80s.

All in all, I am pleased with Delectus. Vangelis and Universal, thank you and keep us happy with more great music.
続きを読む
21人のお客様がこれが役に立ったと考えています
違反を報告
レビュー を日本語に翻訳する

Jonathan Brown
5つ星のうち5.0 Complete? No, Compelling defifinately
2017年2月26日に英国でレビュー済み
Amazonで購入
Luxurious packaging, lush sounding. A joy to hold and a treat to listen to. 13 albums and extensive hard back book for less than £100. And the music is sublime. I have really never gone beyond the RCA albums, China and Jon and Vangelis stuff so much of this is new and thrilling. The stuff I already knew is enhanced by the tweaks (added subtle reverb here and there). China now pulses with the power and space of the original vinyl. Ultimately the beauty and humanity vangelis captures from his electronics is immense. Apocalypse des animaux is my favourite discovery. You can hear how this stuff developed into Blade Runner territory. Simply stunning.
続きを読む
4人のお客様がこれが役に立ったと考えています
違反を報告
レビュー を日本語に翻訳する

kevin slaney
5つ星のうち4.0 Great collect, but terrible and disappointing accompanying book. Less info in it than in many CD booklets!!
2017年5月3日に英国でレビュー済み
Amazonで購入
Lovely collection of his work from the 70s/80s. Nicely remastered with a few added effects that I think generally add to the tracks which have it added.Very nicely packaged and a great addition to any Vangelis fans collection. Be warned though, the book which is of very high quality is little more than a hundred pages of promo photos. I was extremely disappointed by it, hoping it would have lots of information and interesting old photos.
There is literally no written information and what is is very very superficial. Loads of posed, soft focus close ups etc etc make up much of it.
I really think they missed a chance to make this a superb package
続きを読む
違反を報告
レビュー を日本語に翻訳する

Captain Coz
5つ星のうち5.0 Excellent two to go
2018年2月24日に英国でレビュー済み
Amazonで購入
Wonderful collection of some of his finest works. There remains 2 albums I would like to see remastered "Ignacio" and "Le fête suvage"
続きを読む
違反を報告
レビュー を日本語に翻訳する