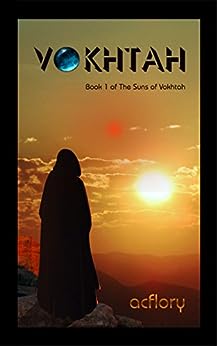 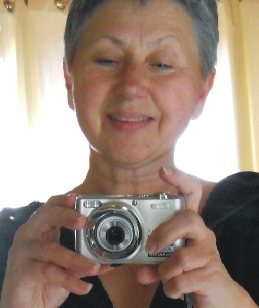 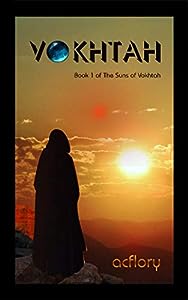 David. M. Prosser
5つ星のうち5.0 A Different World
2013年2月6日に英国でレビュー済み
Amazonで購入
Most Science fiction/Fantasy has one thing in common. There are usually human beings and they're usually the good guys. Vokhtah broke the mould. This is a completely different Planet and not a human being in sight.
I gave this book 5 starts because it's well written and because the author has created the occupants of her planet from scratch. No reference to those creatures created by other authors, these are one of a kind.
The story concerns the mating of the higher or ruling species called the Vokh whose sex depends on who is dominant. A sub-species called the iVokh who serve them have decided one is an abomination and needs to be killed but one iVokh disagees and leaves the house of the healers to try and stop the killing.
I recommend this book to anyone who likes something new in Science Fiction/Fantasy because that's certainly what Vokhtah has in abundance.

Audrey Driscoll
5つ星のうち5.0 A Fascinating Alien World
2020年3月12日にカナダでレビュー済み
Amazonで購入
This book is remarkable for the imagined world on which it's set. Vokhtah has two suns. Its dominant life forms are the Vokh, creatures I visualized as similar to pterodactyls, and their smaller cousins and supporters, the iVokh. Most of the story is about the latter. These creatures are not human. Humans to not exist on this world, but human readers can relate to the thoughts, dilemmas, and emotions of the iVokh who are the primary actors.
The Vokh reign like feudal lords over their eyries, which are managed and maintained by the iVokh, who are divided into a variety of physical types with different abilities, including (in the case of a few) telepathy and mind control. Traders are a clan who distribute goods among the eyries, and Healers are a guild with skills and knowledge to maintain life, and end it when necessary. The interactions of the groups are governed by iron-bound protocols and traditions and complicated by secrets and enmities. Sex, especially for the Vokh, is a brutal, violent business, but outside of mating occurrences, there is no gender. The only personal pronoun is "it."
This is not a quick, easy read. I re-read the first half of the book before writing this review to make sure I understood some of the details. The characters, even the sympathetic ones, don't actually have names. They are designated by ranks and titles, some of which change over the course of the story. The reader is plunged into this alien world on the first page and has to figure out how things work while following the action. Some might give up in confusion, but the dilemma of the Drudge who is the first character encountered is eminently relatable. By the time that's resolved, I was thoroughly engaged in the world and the story, keen to find out more about the strangely fascinating creatures with two hearts and inflatable wings.
The book features a constructed language (conlang), but it does not appear frequently enough to be daunting. There is a helpful glossary at the end, which also explains how the creatures vocalize. Otherwise, the prose is clear and straightforward, with description kept direct and businesslike. There is no hyperbole. Dialogue is minimal, even though the iVokh have a characteristic (and curiously attractive) way of expressing themselves.
Setting aside the alien aspects, the theme of this book is change and difference. Individual characters, and the groups to which they belong, must come up with ways to cope with situations they find unacceptable or challenging. Both the physical environment and the social structure are harsh and unforgiving. Transgressions come with a high price.
It appears this is the first book in a series, and indeed much remains unresolved at the end. I hope a second volume is forthcoming.
続きを読む
違反を報告
レビュー を日本語に翻訳する

D. W. Peach
5つ星のうち4.0 Pure Alien sci-fi
2020年1月1日にアメリカ合衆国でレビュー済み
Amazonで購入
This is a hard book to describe. “Pure Alien” is a good start, and I’m impressed by the author’s ambition and execution. Vokhtah is an alien planet and the characters are insect-like (my impression) creatures who engage in their own sort of political intrigue, espionage, and social caste system. They’re clever, dastardly, selfless, and selfish - much like humans - but there the similarities end.

The world-building is rather amazing and humans won’t find much that’s familiar here. Even the speech is different. The iVokh and Vokh are genderless “its” and don’t have names, referred to by their role in society, their ranking, and their talents. Social norms are dictated by groups and reinforce variations in dominance and subservience. It takes about a third of the book to get used to.

The story unfolds from multiple points of view, all alien. Flory doesn’t pamper the reader with backstory or explanation, but tosses us right into the strange world – sink or swim. The experience is immersive, but it requires patience to figure out who these aliens are and what the heck they’re doing. I enjoyed the story-telling, the fascinating world, the author’s imagination and writing skills. The pace was excellent and kept my interest.

I did spend a fair amount of the book confused about the characters, though. This is primarily, I think, because they don’t have names and, in many cases, go by multiple designations. For example, there are a number of Sixths and Sevenths. A Blue is also a Messenger who is also a Healer. A Teller is also a Trader, and is sometimes an Apprentice, so sometimes they’re the same character, sometimes not. There are a lot of identically designated characters as each location/eyrie in the story has the same basic social structure, and the book involves travel. I struggled to keep them straight until about 50% through when the plot began to narrow down the action and further define the characters’ personalities and motivations.

But then, I struggled to keep Erikson’s Gardens of the Moon straight. That one I gave up on; this one I didn’t. And it was worth it. By the end, I was ready for the next book in the series. I highly recommend Vokhtah to readers who love pure alien sci-fi, love a reading challenge, and want to engage with the work of a wonderfully creative imagination.
続きを読む
違反を報告
レビュー を日本語に翻訳する

TermiteWriter
5つ星のうち5.0 “They were now just two frail iVokh pitting themselves against the might of the wild.”
2020年3月23日にアメリカ合衆国でレビュー済み
Amazonで購入
Vokhtah is a difficult but rewarding book. If you like unusual conceptions of extraterrestrials, this is for you. Once you’ve read about half of it, the complexities begin to clarify themselves, but two readings are needed for complete understanding. For example, it took me quite a while to grasp that the Blue and the Messenger were the same individual, and I also didn’t realize that there were two traders’ caravans wending their way to Needlepoint – I thought the Junior and the Messenger were in the same caravan and I got confused. Part of the problem is that the characters don’t have names, only titles. In her end matter, the author addresses this – it seems there is a taboo in this culture about enunciating your real name.
Vokhtah is a grim and forbidding planet; it has two suns, one a hot white star and the other a red dwarf. Sometimes they both shine at once, creating a climate of extremes. The planet is populated with an assortment of mostly vicious and predatory lifeforms and that includes the intelligent ones, who prefer to consume their food animals live. It’s a tribute to the author that she can take these basically repulsive intelligent lifeforms and make them sympathetic. And I would recommend that any human ship of exploration steer clear of the planet Vokhtah – humans would probably be seen as prey animals!
My guess would be that the Vokh evolved from bat-like creatures – their ability to echo-locate is mentioned briefly. They have wings (which contain their lungs), so most of them can fly. They have two hearts. And they are telepathic hermaphrodites with seemingly magical inner powers, like mind-healing and also mind-killing (their Healers are also trained as assassins). There are two variant species – the Vokh (large and dominant) and the iVokh (meaning literally “small Vokh”). The Vokh have a serious flaw – breeding is consummated by means of violent rape; nobody wants to bear an offspring because the “female” always dies in childbirth (this doesn’t occur with the iVokh).
However, the people have a strong sense of honor and obligation – if you accept help from someone, you incur an obligation and if you don’t fulfill it, you are ostracized. In the second half of the book, after the episode at the Little Blue River, the main characters – the Messenger and the Apprentice – are shown developing a sense rare in these people – empathy, an ability to relate to and care about others with whom one has a relationship, beyond the obligations of the code of honor.
All this just scratches the surface of the author’s astonishing creation. I should also mention that the book is a cliff hanger, and no second volume has yet appeared.
I must say a few words about the language. Unfortunately, the Kindle version has no Table of Contents and so I was pleasantly surprised to discover that the author provided a brief treatment of the language in the end matter. It seems to have no pronouns, and verbs are consistently rendered only with the present participle form, all of which helps to create the alien language effect. Certain words used in the text are self-explanatory, like “ki” for “no” and “s’so” for “yes.”
There is one etymological gaffe that I can’t help commenting on – the explanation of the word “boot” (a foot-covering). The character doesn’t know what the word “boot” means and it’s explained as a contraction of “bucket for foot.” And yet that derivation would be impossible since the iVokh aren’t speaking English. You have to assume that the Vokhtah words reflect a similar construction, which the author could have fabricated.
But that’s only a quibble – don’t be deterred! This really is an amazing book and while the culture may not be palatable to everyone (you need a strong stomach sometimes), I definitely recommend it to any serious reader of science fiction.
続きを読む
違反を報告
レビュー を日本語に翻訳する

The title is the name of the planet on which live two broad categories of creature: the powerful Vokh and the lesser iVokh, the latter of which consists of many subspecies. The story concerns the adventures of one of the more important iVokh, called simply “the Blue”, as it attempts to avert a potential disaster caused by the short-sightedness of the Guild - the most powerful of the iVokh, who have decided that a Vokh must be killed. The Blue undertakes a desperate journey across the planet’s land mass which taxes its skills and endurance to the limit. During this journey, we learn more about the feared Vokh, all of the subspecies of the iVokh, and just how hard life on Vokhtah is.

The world-building in this book left me speechless. While there are nods to us human readers (woodworking, tanning), the originality of the ideas are staggering. The nuances of this planet are revealed subtly, interwoven with the story itself, and there are no tropes of popular science fiction in this book: the reader is treated with intelligence and given credit for having a functioning imagination. Simply put: you either get it, or you don’t get it. This shows remarkable authority by the author, and makes for wonderfully enjoyable storytelling for those of us who have had enough of the severely limited science fiction which popular culture deems worthy these days.

To me, the style called to mind the work of Polish author Stanisław Lem in his more serious books, such as Fiasco and Return From The Stars: confident storytelling painted on a broad canvas with the dexterous strokes which leave the reader not only thoroughly entertained, but actually in awe of the author’s imagination.