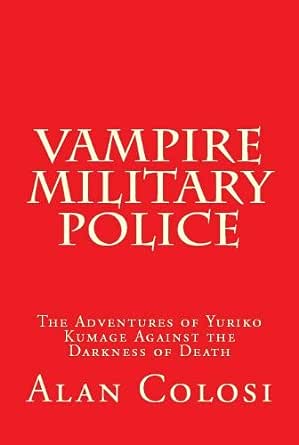 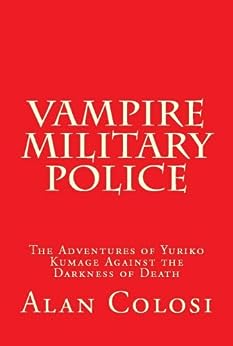 VAMPIRE MILITARY POLICE (First Edition): The Adventures of Yuriko Kumage Against the Darkness of Death: Before and After KKXG: King Kong vs Gigantosaurus (English Edition) Kindle版

ALAN COLOSI is a Cum Laude Bachelor of Arts degree graduate in Computer Science with Japanese as the foreign language from BOSTON UNIVERSITY, The College of Arts and Sciences (CAS '00). Having traveled to Japan 93 times from Boston, MA, USA with over 3 Million miles as an Emerald Member with The One World Alliance, Mr. Colosi maintains countless years of computer programming, radio, media, market research and journalism experience integrating both English and Japanese. Prior to BOSTON UNIVERSITY, Mr. Colosi worked at radio stations WXKS-FM, Boston, MA as a core programmer (1984 - 1988) and KISS-FM LONDON (as a reporter 1991-1993) and currently is the owner and operator of SHADO CONTROL management ... http: //www.shado-x.com ... maintaining the site for over 16 years with business news and information, merchandise sales, and advertising in fields emphasizing science, the arts, and business analysis by constructing mathematical theory with successive growth. The current extension of SHADO CONTROL is the business plan push of KKXG: KING KONG VS GIGANTOSAURUS, CAPTAIN YURIKO KUMAGE, ***AND*** VAMPIRE MILITARY POLICE after receiving very important blessings for it to succeed. The CAPTAIN YURIKO KUMAGE TRILOGY (aka: "KUMAGE TAICHOU") is dedication to and written for YUMIKO SHAKU. KKXG: KING KONG VS. GIGANTOSAURUS is the content derived from the original "KKXG: KING KONG VS GODZILLA" copyright created and owned by the author. All the content, including subsequent screenplays have been submitted to a representative agent. KKXG 2006 Prima Facie US Registered Copyright: PAu003075664. KUMAGE TAICHOU June 12, 2011-2012, Certified Prima Facie US Registered Copyright: TXu001767476. Please enjoy every part of it. --このテキストは、paperback版に関連付けられています。

Dr Who? Regenerated
5つ星のうち5.0 A Vampire, a Saurian Beast and a Martial Arts Wonder Women Mixed Well
2013年5月4日にアメリカ合衆国でレビュー済み
Amazonで購入
I must admit I had to restart this book even though after reading the first two works about Yuriko Kumage and looking forward to the end of the trilogy.

There are two subtitles on this work and the second one is not on the cover and I therefore was not prepared to find Chapter One as a addendum to the original ending to: "Captain Yuriko Kumage: Her First Adventure During the Greatest War on Earth: The Prequel to KKXG:King Kong vs Gigantosaurus" which is the first story in the chronological order of the trilogy. Although it was written second. This work being written third. I became lost although there is a page heading which indicates the opening section of this work, the first four chapters, skips all the event of the direct previous work.

I state this because some readers of a trilogy do not realize it is a trilogy and buy and read a book just by the title alone. Hopefully, you will read this review first and follow Yuriko Kumage in the proper order.

To those first four chapters you will receive answers to the relationship between Yuriko and Max in "KKXG"King Kong vs Gigantosaurus: The Adventures of Yuriko Kumage During the Greatest War on Earth" that may have seemed strange after the first work ends. You will also find foreshadowing of what is to come within this work. Within this work you will also get the answer to what is "The Greatest War on Earth".

As to the rest of the work you will enter a World with a Vampire called "The Darkness of Death" which is not your European "Dracula" style creature, nor the Vampires in movies from Yuriko's native Japan. Additional Kumage and Max must deal with a saurian beast from another dimension who may, or may not be an enemy of the Darkness.

In short this is one very good read so enjoy.

West Reanimated
5つ星のうち5.0 Martial Arts, Vampires, and Giant Monsters
2012年11月26日にアメリカ合衆国でレビュー済み
Amazonで購入
As with Mr. Colosi's previous 2 books in the series (KKXG  KKXG: KING KONG VS GIGANTOSAURUS (First Edition): The Adventures of Yuriko Kumage During the Greatest War on Earth  and Captain Yuriko Kumage  CAPTAIN YURIKO KUMAGE (First Edition): Her First Adventure During the Greatest War on Earth: The Prequel to "KKXG: King Kong vs Gigantosaurus" ) this book is filled with spectacular Martial Arts action blended with a deep knowledge, and appreciation, of Japanese culture, and a bit of the Supernatural, though the supernatural focus takes more of a central stage in "Vampire Military Police".

I'll not waste time giving a breakdown of the plot in my review, you can read that in the description above, but I will say that this book, along with the previous 2, makes for some good reading. Vampire Military Police is a fast paced book, with incredibly well defined characters, and beautifully choreographed action sequences. I say "choreographed" because, in the reading, it is plainly clear that the author has spent a great deal of time planning just how the scenes would look and, very likely, either modeled or acted some of the moves to insure accuracy in the description. While this take on the action is not different from the earlier 2 books, Mr. Colosi has refined his skill in the descriptive for this book and the blows are more hard hitting than ever.

The introduction of Vampires into the world of KKXG was, at first, a bit of a concern for me, as a fan from day one, however, the author's take on the creatures is not entirely traditional and seems more rooted in the Japanese versions seen in Vampire Hunter D, or other works of the same genre. Mr. Colosi's Count (The Darkness of Death) is a serious contender and holds his own against not only the human antagonists, but also a giant monster! This mixing of more European supernatural foes, with the Japanese Giant Monster genre gives the reader something new, and exciting. For a book that could have been a rehash of the previous tales, (how many giant monsters can Kumage fight?) this brought a fresh, new twist to the ever expanding history of the title character, and the world she inhabits.

As with Mr. Colosi's previous books in the series, our lead character is based upon Japanese actress/author/designer Yumiko Shaku, and the descriptions of the character are matched beautifully to her. It's not hard to see this book on screen, with Ms. Shaku as the lead role.