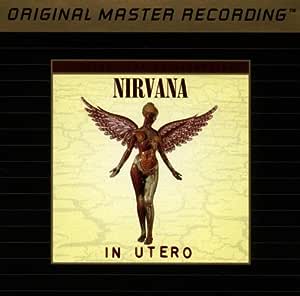 5. Frances Farmer Will Have Her Revenge On Seattle

Overwhelmed by sudden success, Nirvana promised to take a harsher, more abrasive route on their second major-label release. Enlisting Chicago-based noise maven Steve Albini (of Big Black fame), Kurt Cobain and company succeeded in producing a record that was violent, disillusioned, and deeply moving. Every song reads like a commentary on the cost of fame ("Serve the Servants") and the unhealthy relationship between performer and fan ("Milk It"). Of course, they might all simply be about Courtney Love. Gossip aside, there is no denying the sheer power of Cobain's songwriting, his singing, and the band's amazing, visceral power. Cobain even manages a John Lennon-like mantra at the end of the heart-wrenching "All Apologies." "All in all is all we are," he intones repeatedly, only for Cobain that's no consolation. --Percy Keegan

Gavin Hardy
5つ星のうち5.0 A fantastic reissue. Ticks all the right boxes. Read on...
2017年8月6日に英国でレビュー済み
Amazonで購入
After the disappointment that was the 20th anniversary of Nevermind (Poor 'loudness war' mastering being a big complaint of many) It is a relief and a delight to report that the 20th anniversary edition of In Utero is great. I would personally award In Utero 4 stars out of 5 if reviewing it based on it's music alone. This 5 star rating is awarded for reasons specific to this edition.

The reasons being:
1. Great remastering. Volume levels are very similar to the original release from 1993, but the improvements in equipment used to master albums since then has managed to reveal a little more detail from the analogue master recordings of these songs. The mastering of this album and its bonus tracks was done at Abbey Road by Steve Rooke, who was involved in the (almost) universally praised 2009 Beatles remasters. It makes Bob Ludwig's remastering of Nevermind look like the work of an amature, a shame; considering Ludwig is a famed mastering engineer responsible for many fantastic sounding albums.

2. All the B-sides to the singles from In Utero and a couple of tracks used on compilation albums from the same era. Some may bemoan the fact these b-sides are 2013 remixes, but they are subtle remixes that don't differ much from their original incarnations. Nice to have all these songs in one place. Furthermore: the original mixes of Heart Shaped Box and All Apologies are included, these songs were given a remix by Scott Litt on the original album as they were earmarked as singles, Geffen records found the original mixes a little 'abrasive' sounding for potential radio play.

3. An alternative mix done by In Utero producer Steve Allbini, with input and approval from Krist Novoselic and Dave Grohl by all accounts. An interesting version that to my mind neither improves upon or worsens the original release; its simply a great sounding companion piece. Pre album demos of songs are also included. Demos are of limited interest to me personally, but their inclusion isn't unwelcome.

Many so called 'Deluxe Editions' of famous albums feature only Demos and/or live recordings as bonus content. Some also have questionable sound quality. The remastering and extras here show a concerted effort in creating a value for money re-release, which is only £6.99 at the time of writing. Consider that In Utero on CD would have been in the £12-15 in 1993.

4. Nice looking packaging and graphics, slightly understated and classy. Brief but faintly amusing liner notes from comedian Bob 'Bobcat' Goldthwaite (Most of us Brits only know him as the crazy crimiminal turned cop character from the 'Police Academy' films😁). Proper disc trays on this set too, not tight 'disc scratching' inserts.

In conclusion: A deluxe edition worth purchasing. A single disc edition featuring only the original album remastered and a Super Deluxe edition with a whole host if goodies is also available. This 2cd set however is currently the best value for all but the devout completest.

Syriat
5つ星のうち5.0 Teenage Angst Has Paid Off Well, Now I'm Bored And Old
2013年9月29日に英国でレビュー済み
Amazonで購入
And so we finally get the 20th anniversary edition of In Utero, perhaps the most difficult album in Nirvana's back catalogue to review. Listening again it is very difficult to divorce the content here from the legacy. For someone who was there at the time its a landmark for many reasons and whilst it is still the five star album it always was it is a bittersweet listen.

Taking the original album on its own merits this is a very strong offering. It has some of Nirvana's finest moments here alongside the screaming and wailing of numbers like Scentless Apprentice and others. There are moments of absolute genius here and twenty years does not diminish the power of Frances Farmer, All Apologies, Rape Me and pretty much every other track here. Its not the easiest listen, Pennyroyal Tea really gives the impression of how tired Cobain was of the music industry, it feels like it was an effort to make. One worth enjoying.

To remember the moment this was released is to put it in true context. Nevermind had conquered the world. Out of nowehere Nirvana had become the focus of a movement that pushed loud rock music away from poodle haired rockers and made it accessible to everyone. The expectation of this was huge. That it lived up to that was an achievement. That it exceeded it, in my opinion this is Nirvana's best album, was astonishing. However, the echo's of Cobain's frustration and increasingly unhappy state of mind is all over the album. Lyrics that openly discuss suicide as well as selecting songs that were less commercial than the B sides are just evidence of Cobain and the bands attempts not to just put out an easy follow up. The extra's here are proof of that. Anyone familiar with Nirvana at the time is familiar with the B sides Marigold and Moist Vagina and the tracks that ended up on compilations Sappy (appearing uncredited on the excellent No Alternative album) and I Hate Myself and Want To Die (at one time the title track of the album and it appeared on the Beavis and Butthead soundtrack). Putting these on the same disk as the original album makes for an interesting experience. Sappy is as commercial a track as Nirvana ever made, and maybe one of their best. Marigold is a shambling and beautiful number. What comes across is that they deliberately put on the album more challenging tracks than go the easy course. The different mixes add little. All Apologies has a mix with the Cello's far more prominent and the mix of Heart Shaped Box has a more discordant breakdown, but its not going to be a massive difference to anyone listening. Except the band. Never forget that Nirvana asked for these mixes due to their attention to detail. It may run counter to what you think but the bands attention to detail was huge and they constantly reworked and picked out detail of tracks. The instrumental numbers are good but realistically if you have this already you are not going to get much more out of this package than you already have. Especially if you have the B sides I mentioned above.

In Utero is the album of Nirvana's that is the most personal to me. Its the album I bought to take to uni with me, its the album I listened to when Cobain departed this mortal coil, it has other memories embedded into my DNA. Its a sad moment in music history where a band who had the world at their feet recorded a moment of brutal beauty. It is also a musical triumph. Nirvana delivered a landmark album that ended up being their swansong. Sad, beautiful, angry, frustrated and wonderful...name an album in the last twenty years that has this legacy. They are few and far between.
続きを読む
15人のお客様がこれが役に立ったと考えています
役に立った
フィードバックを送信中...
フィードバックをお寄せいただきありがとうございます。
申し訳ありませんが、お客様の投票の記録に失敗しました。もう一度試してください。
違反を報告
レビュー を日本語に翻訳する

A. M. Smart
5つ星のうち5.0 An iconic album
2015年10月21日に英国でレビュー済み
Amazonで購入
This is for the 2 disc special edition, not the uber deluxe version with DVD etc.

A fantastic album that gets more to the raw sound that Kurt and the band wanted to express after Nevermind's balanced sheen. The biggest attraction to this set is of course the Steve Albini 2013 mixes of the album. Some of the tracks are definitely more open sounding and forceful others are done in a subtle way, eitherway it's great to hear them.

The demos are cool but if you're just a casual fan they may not appeal that much but its still interesting to hear the songs taking shape.

All in all (is all we are, arf arf!) I can't recommend In Utero enough, whether you go for the two disc, super deluxe or just stick with your original copy, it's a great album.
続きを読む
2人のお客様がこれが役に立ったと考えています
役に立った
フィードバックを送信中...
フィードバックをお寄せいただきありがとうございます。
申し訳ありませんが、お客様の投票の記録に失敗しました。もう一度試してください。
違反を報告
レビュー を日本語に翻訳する

justin
5つ星のうち5.0 My favourite album of all time.
2014年5月17日に英国でレビュー済み
Amazonで購入
Although Nevermind is obviously great,it had more of a slick feel to the production which i never dug..In Utero has'nt got slick production & that for me,is just one of the reasons its so fantastic.What a brilliant opening line to the album 'Teenage angst has paid off well but now i'm bored & old' ,Kurt implying thats he's matured some what,He certainly has musically on In Utero. When the Bass hook of Heart Shaped Box kicks in.its just angelic to my ears & his voice on that track,Pennyroyal Tea & All Apologies has never sounded more beautiful.I never get bored of playing this record,i played it this morning for the 3,608th(or something)time & i'l still play it again tomorrow.Kurt was,in my opinion.a true genius musically & emotionally & the way he combined the two was his glory & i bet his spirit is still making music up there in heaven..R.I.P dude..We all miss you.
続きを読む
3人のお客様がこれが役に立ったと考えています
役に立った
フィードバックを送信中...
フィードバックをお寄せいただきありがとうございます。
申し訳ありませんが、お客様の投票の記録に失敗しました。もう一度試してください。
違反を報告
レビュー を日本語に翻訳する
その他の国際レビューを読み込む

Mathew Palser
5つ星のうち4.0 good price for a classic modern rock album
2019年9月29日に英国でレビュー済み
Amazonで購入
you can get the 24 bit digital version of this album from HD music sites (I got mine from the Onkyo site but it is shutting next month) you may be able to get it from HDTracks, I bought the vinyl version for a relative.
続きを読む
役に立った
フィードバックを送信中...
フィードバックをお寄せいただきありがとうございます。
申し訳ありませんが、お客様の投票の記録に失敗しました。もう一度試してください。
違反を報告
レビュー を日本語に翻訳する