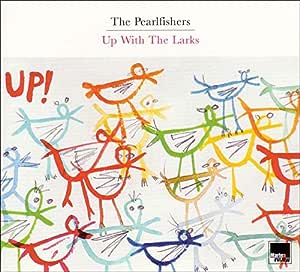 Up With the Larks CD, インポート

1. Up With The Larks

4. The Umbrellas Of Shibuya

10. Blue Riders On The Range

Richard S. Ledford
5つ星のうち5.0 Another Classic Album From The Masters Of Melody!
2007年10月1日 - (Amazon.com)
形式: CDAmazonで購入
It was about this time, 2 years ago that I first heard The Pearlfishers. They quickly became my favorite, contemporary pop band. This current album was released just last week. I have been eagerly awaiting its arrival. It is yet another great album from "the most melodic pop band in the world." Fans who are particularly fond of the 2001 album, Across The Milky Way will feel right at home with this new album. Up With The Larks has the reflective and more personal feel of that album. There are also some influences from the Young Picnickers album in addition to those wonderful Bacharach seventh and ninth chords, providing pure ear candy to the listener. A recurring, lyrical theme running through this album is that of having hope and lifting ourselves up (like the lark) from an increasingly difficult world. The following are some of musical and lyrical highlights from the album:

"Up With The Larks" - An upbeat number with an extremely catchy, hook-laden chorus. We all need to be
lifted to a hgher plane.

" The Bluebells"------- A beautiful, quiet ballad musically reminiscent of "Blue December" (from A Sunflower
At Christmas or The Young Picnickers). To me, the Bluebells are a metaphor for
constancy and hope in a troubling world.

"Send Me A Letter"--- Another lilting, catchy tume. In our information society, computers rule and real,
human contacts are minimized. A simple note or phone call from a significant other
can make quite a difference in our lives.

"Umbrellas Of Shibuya" The first single from the album. This is a slow triple meter song which is musically
reminiscent of "I Was A Cowboy" from Across The Milky Way. What sounds to me like
pizzicato strings adds a nice touch to the music.

"Womack And Womack" A soul-tinged song about the music industry sharks who exploit and control their
victims, the recording artists. Now I have to read up more on Bobby Womack!

"London's In Love"-----One of my favorites upon the initial hearing of the album.

"Eco Schools" ---------A song about the need for getting in touch with the flora and fauna of our good earth.
Also, the respect for the delicate balance of our planet. while there is still time.

"With You On My Mind"- The reviewer from Amazon compared this song with the music from Randy Newman (
an excellent comparison). This is a lighter song which easily could have come from
Newman's, Sail Away album. The clarinet add to the frolicsome nature of the song.

"Fighting Fire With Flowers" -Revenge is sweet for a day or two. However, in time, one feels much worse as a
result. This is a song about replacing vengeance with kindness, instead. In the
Bible (Matthew 5:44) it says, "Do good to them that hate you."

"I Just See The Rainbow" - A great endpiece about maintaining an optimistic (but not "Pollyanna") view of the
world, in spite of the surrounding darkness. It is our choice to see the good in life.
Musically, this song is similar to "Across The Milky Way."

The only thing missing from this album is an instrumental track, typically found in previous Pearlfishers albums. Although there is nothing "groundbreaking" on this new album, I still give it 5 stars because of its
impeccable craftsmanship and indelible melodies!

Izant
5つ星のうち3.0 Running out of ideas?
2008年8月3日 - (Amazon.com)
形式: CDAmazonで購入
I have all the Pearlfishers albums and rushed out to buy this one too based on good critical reviews. I have to say that this is not Scott's most original nor enjoyable output. I think he peaked with Across the Milky Way and Strange World. Womack and Womack for instance is highly derivative and generally the songs verge towards ball room sounds like on Fight Fire with Flowers. Just download the title song, which is uplifting and one of the group's best.
続きを読む
2人のお客様がこれが役に立ったと考えています
レビュー を日本語に翻訳する

Music maven
5つ星のうち4.0 Melody, melody, melody
2009年10月22日 - (Amazon.com)
形式: CD
If you're like me, and you like your pop music with melody everywhere, you'll like this CD. Every single song is memorable, and the harmonic structures are consistently surprising and interesting, even if they do tend to hover around the same general area. My one complaint is the production, which is, to my taste, mushy. Every instrument has a rounded edge on it and all the instruments are mixed in a way that blends them together. The real problem with this approach is that it tends to muddy up the melodies. I'd prefer to see the production more spare, with more clarity in the instruments. That way those beautiful vocals could really come across clearly. But this is a minor, and probably personal, quibble. These songs are so strong and the melodies so indelible that you'll go singing them for the rest of the day. And like one other reviewer, I find I can listen to this again and again without ever having its magic fade.
続きを読む
3人のお客様がこれが役に立ったと考えています
レビュー を日本語に翻訳する

Mark Johnson
5つ星のうち5.0 Simply Great
2008年3月30日 - (Amazon.com)
形式: CD
I knew nothing about the group and had no idea what to expect, but this turned out to be on of those albums you can play time and time again without getting bored. 9 times out of 10 someone hearing it for the first time has wanted to know who it is. (In a positive manner...rather than wanting to report them for aural offences.) It was so nice to buy an album and enjoy it from start to finish.
続きを読む
3人のお客様がこれが役に立ったと考えています
レビュー を日本語に翻訳する
Amazon.comのカスタマーレビューを見る(4) 5つ星のうち4.1
Amazonプライム会員ならお急ぎ便、日時指定便が使い放題
さらに、映画もTV番組も見放題。200万曲が聴き放題 。クラウドに好きなだけ写真も保存可能。
> プライムを無料で試す