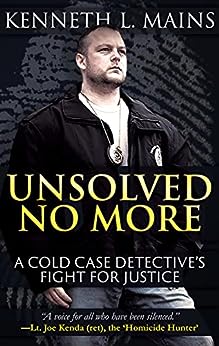 英語版 Kenneth L. Mains (著) 形式: Kindle版
すべての形式と版を表示
Sorry, there was a problem loading this page. Try again.
The life and crime solving of the renowned detective who’s “a voice for all who have been silenced” (Lt. Joe Kenda [ret], the “Homicide Hunter”).

As a law enforcement officer for more than fifteen years, Detective Kenneth L. Mains has investigated thousands of crimes, including working undercover with the FBI, solving cold case homicides, investigating the Mafia, and leading one of the greatest cold case organizations ever assembled. This is his story and that of the victims for whom he speaks.

“A tremendous amount of respect for his investigative insights and his integrity.” —Jim Clemente, former FBI profiler and writer for Criminal Minds

Unsolved No More will take readers on a journey with a struggling kid who barely graduated high school to a teenager who joined the Marine Corps and finally a man who put himself through college to accomplish his lifelong goal of becoming a police detective. Mains, who is routinely sought out by law enforcement and victims’ families to help solve cold cases, writes about his own investigations to show readers how he goes about solving crimes others had given up on.

“Kenneth Mains is a law enforcement equivalent of a surgeon of cold cases . . . he diagnoses the issues and, working with precision, dissects the cases with consummate skill and care . . . I highly recommend this wonderful book if you want to understand the cold case investigatory process or if you want to dive into some cases that are filled with twists, turns, and more than a few surprises.” —Blaine Pardoe, New York Times–bestselling author
続きを読む
Previous page
Next page
販売： Amazon Services International, Inc.

Kenneth L. Mains is a United States Marine Corps Veteran and a Detective. He uses a unique and particular combination of forensic science, criminal investigation, forensic psychology, victimology, crime reconstruction, crime scene assessment and criminal profiling to solve cases. He is the President and Founder of The American Investigative Society of Cold Cases (AISOCC) which was created to assist law enforcement members and victims families in solving the plethora of unsolved cold cases. His law enforcement career has consisted of working as a member of the Williamsport Bureau of Police, Lycoming County Drug Task Force, Federal Bureau of Investigations and the Lycoming County of Pennsylvania's District Attorney's Office. During his tour with the United States Marine Corps, he was assigned primarily with the Special Operations Training Group (SOTG), II Marine Expeditionary Force with a concentration on administrative intelligence. He holds a Bachelor of Science Degree (BS) in Criminal Justice from Lock Haven University and has taken Master Degree course work in Forensic Criminology with an emphasis on Criminal Profiling. Mains is an Advisory Board Member at the Cyril H. Wecht Institute of Forensic Science and Law at Duquesne University and also Lock Haven University. He is also a second opinion provider for the National Organization for Parents of Murdered Children. Mains has been bestowed a number of awards to include Police Officer of the Year and the Gallantry Star for Acts of Distinguished Bravery by the Fraternal Order of Police. --このテキストは、絶版本またはこのタイトルには設定されていない版型に関連付けられています。

JL Populist
5つ星のうち4.0 Puzzling Unsolved Cases
2018年11月24日にアメリカ合衆国でレビュー済み
Amazonで購入
I'll start off by saying that I have heard of the author but didn't know much about him. This book reads as a combination autobiography and true crime book.
The strongest aspect of this book is the methodology that Detective Mains refers to. He explains that very well in this book.
He comes across as a straight shooter and able to narrow down options in short order.
The only drawbacks I see in the book are editing. It wasn't terrible but it could benefit from some proof-reading.
Choice of cases. I understand that the cases that Kenneth Mains chose for the book are cases that stick with him and for good reason. I wish that he had included more that were resolved.
I echo what another reviewer wrote about being interested in any updates on the cases that were covered in the book.
続きを読む
8人のお客様がこれが役に立ったと考えています
違反を報告する
レビュー を日本語に翻訳する

Laurel Perkins
5つ星のうち1.0 Too Much
2019年7月20日にアメリカ合衆国でレビュー済み
Amazonで購入
Most of this book he is talking about himself. It is as if he has ADHD and has his thoughts typed up. I hope he learns to stay on topic and write books as he has advertised them. I didn't care for this one at all.
続きを読む
5人のお客様がこれが役に立ったと考えています
違反を報告する
レビュー を日本語に翻訳する

Lorie
5つ星のうち5.0 Great man
2022年1月14日にアメリカ合衆国でレビュー済み
Amazonで購入
Fantastic book! What a great detective, and man, Ken mains is! He cares deeply for the families that have lost a loved one. Great man to have on your side!
続きを読む
2人のお客様がこれが役に立ったと考えています
違反を報告する
レビュー を日本語に翻訳する

Thomas Panholzer
5つ星のうち4.0 some good; some not so good
2017年5月31日にアメリカ合衆国でレビュー済み
Amazonで購入
Kenneth L. Mains, author of Unsolved No More, saves his most profound revelation until the end when he writes of the loss of his son. As a father, I cried. Readers of this book will find emotions rise: some good; some not so good. I think defense attorneys, cop wannabes, cop groupies, and psychologists will enjoy the book for different reasons. Mains moves from his time in the Marine Corps (four years assigned to the same base) through working for a corrupt police force and the ego-inflated FBI to his founding of The American Investigative Society of Cold Cases. He worships Serpico, the whistle-blowing cop, and this should tell a psychologist something about Mains’ personality and integrity. For those who don’t know, Serpico was a very honest cop working in a very corrupt, New York cop shop. He was persecuted for this honesty. Mains reaches for parallels. Just when I started to think the book is typical ego-inflated cop-fare, Mains hits me with his belief many homicides go unsolved because of egos. (At last, someone has the courage to say this.) He also raises the question of whether police officers should be held accountable for their bad arrests. He also advocates for a quality-control team of neutral parties to investigate homicide cases BEFORE they go to trial, so they really catch the right guy. The book can be divided into three parts: his own ego, how to investigate a cold case, and actual cases. The first part would have stopped me from going further had I not agreed to write this review. And this would have been my loss, for the action takes place in the third part. The second part should be common sense, but as Mains points out over and over, cops tend to be sloppy, many are afraid to have others work on their cases, and agencies constantly have turf wars that never help the victim. The book shows the reader Mains’ thought-process as he goes through cases. Among his cold case investigations are the Dawn Marie Miller, Jennifer Hill, Deborah Marchese, Carey Mae Parker, Michelle Jolene Lakey and Theresa Corley cases. However, two deaths haunt him: those of Gail Matthews and Tamara Marie Berkheiser. And here is where editing should have become more active. Had the book begun with the events concerning these deaths, which are still unsolved, ANY reader would have been compelled to read through the book in one sitting. Despite this, the lack of more stringent punctuation, and one error I consider large because I was in the military (the use of the term “guide iron” instead of what the word should have been-“guidon,” the book is worth purchasing.
続きを読む
15人のお客様がこれが役に立ったと考えています
違反を報告する
レビュー を日本語に翻訳する
すべてのレビューを参照します
問題を報告
この商品には、不適切な内容が含まれていますか?
報告
この商品は、著作権を侵害していると思いますか?
報告
この商品には、品質または書式設定の問題が含まれていますか?
報告