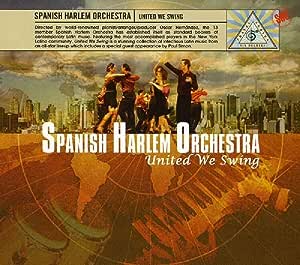 Spanish Harlem Orchestra's United We Swing does more than just make you want to dance. The joyous collection will likely incite a full-scale house party, complete with flowy dresses, sparkly jewelry, and silky, unbuttoned shirts. The disc plays like an actual live performance, a tight mix of passion and precision. Bandleader Oscar Hernandez even introduces the entire outfit on the opening track. Horns blare, percussion pulses, and a voice of choruses guides several numbers. If nothing else, take a listen to the trio of "Sacala Bailar," "Ahora Si," and "Que Bonito," which comes midway through the disc, for an idea of SHO's sparkling seamlessness. "Danzon For My Father" is a touching instrumental tribute, and the bilingual "Late in the Evening-Tarde en la Noche" features an inspired guest spot by Paul Simon, who matches the group's swelling enthusiasm. Swing does just that--and so much more. --Joey Guerra

Since their arrival in 2000, Spanish Harlem Orchestra (SHO) has established itself as a standard bearer of contemporary Latin music. Directed by world-renowned pianist, arranger, and producer Oscar Hern ndez, the thirteen-member all-star ensemble has reintroduced the classic sounds of New York City Salsa to the Latin market and music lovers worldwide. United We Swing, SHO's third album, is a stunning new collection of infectious Latin music following their 2004 Grammy award-winning album Across 110th St., and their 2002 Grammy nominated debut, Un Gran D¡a En El Barrio. United We Swing continues in the same vein as previous Spanish Harlem Orchestra albums with more of an emphasis on original material. With nine original songs, the band has forged a unique identity, built on a musical foundation laid down by El Barrio (a pulsating Eastside community in NYC located to the south of 125th St) icons Tito Puente, Tito Rodriguez, and Machito. Paul Simon is featured as a special guest on a cover of Late in the Evening/Tarde en la Noche.

Max
5つ星のうち5.0 Buy this album!
2016年1月15日に英国でレビュー済み
Amazonで購入
SHO nuke'em all ! Comparing modern salsa yawlers with this terrific band it's like comparing an old trabant with an huge shining starship. Each song is powerful, catchy, the sound is impressively sharp, extremely groovy, yet perfect in its performance. SHO will absolutely make you shuffle your feet. Yo man, listening SHO fantastic horn session doing napalm-style mambo while swhirling with my partner throw me to the outer space. A hurricane of joy !!! A tornado of happiness !!!This is big band Salsa !!! Hat's off to SHO !!!
続きを読む
違反を報告
レビュー を日本語に翻訳する

Exhilarating
The CD is exhilarating and reminiscent of many great Latin groups from New York in the early days of Salsa. The 3 singers are fantastic and the orchestration is very traditional. 3 trumpets, 2 slide trombones and a baritone saxophone make up the "loud" section. The rest of the group is made up of 3 excellent percussionists (conga, bongos and timbales) plus a good base player and the leader on piano. Overall, SHO has a very nice, full and rich sound led by the 3 vocalists. I had the pleasure of seeing SHO live at the University of Maryland and they were even more energetic in person than on the album, which itself is very dynamic. This is a good CD for anyone to have in their collection if they enjoy older style salsa with excellent vocals.