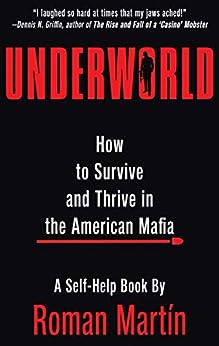 Underworld: How to Survive and Thrive in the American Mafia (English Edition) Kindle版

英語版 Roman Martín (著) 形式: Kindle版
すべての形式と版を表示
Sorry, there was a problem loading this page. Try again.
“Accurately describes ‘the Life,’ and the pros and cons of becoming a mobster . . . in a very unique manner that will no doubt have you in stitches.” —Frank Cullotta, coauthor of Cullotta: The Life of a Chicago Criminal, Las Vegas Mobster, and Government Witness

For the first time in history, there is now an easy-to-follow self-help guide on how to join and rise in the most exclusive men’s club in the world—the Italian-American Mafia (aka La Cosa Nostra). Learn everything from loansharking to leg-breaking to corpse disposal, all without leaving the comfort of your mobile home or prison cell.

Based on interviews with dozens of former high-ranking Mafiosi and many other hardcore mobsters from across the globe, true-crime auteur Roman Martín has risked life and limb to bring you this spellbinding tour de force. Whether you’re a couch-surfing gangster-wannabe or simply someone who’s watched The Godfather too many times, this breathtaking exposé of “the Honored Society” offers something for everyone.

Pushing the bounds of the First Amendment to their breaking point, Don Martín also reveals the FBI’s most closely guarded secrets when it comes to “wiseguys” and “goodfellas.” Wanna know the one surefire way to find out who in your crew is an undercover cop or fed? Or the best way to deal with those annoying witnesses? Then look no further, friends, for all your questions about the outlaw lifestyle shall be answered in Underworld.

“I laughed so hard at times that my jaws ached!” —Dennis N. Griffin, award-winning true-crime author of The Rise and Fall of a “Casino” Mobster: The Tony Spilotro Story
続きを読む
Previous page
Next page
販売： Amazon Services International, Inc.

Roman Martín is quite possibly the laziest and most incompetent investigative journalist working in the business today. Hampered by severe character flaws and delusions of grandeur, he nevertheless exhibits an uncanny ability to empathize with career criminals. If Inspector Jacques Cousteau and Jeffrey the Dude Lebowski had mated and sired a hack writer, it would have been Don Martín. --このテキストは、kindle_edition版に関連付けられています。

"I laughed so hard at times that my jaws ached!" - Dennis N. Griffin, award-winning true-crime author of The Rise and Fall of a "Casino"Mobster: The Tony Spilotro Story

"In his book UNDERWORLD, Roman Martín has hit a home run. It is amazingly well-researched and jam-packed with stories by sources whose names will be very familiar to Mob enthusiasts. While the stories and other matters addressed are accurate descriptions of serious things, such as murder and mayhem, they are told with humor and may often have you laughing hysterically. Congrats, Mr. Martín, on a job well done." - Dennis N. Griffin, author of Surviving the Mob and Rogue Town

"I couldn't let go of it! I read and laughed out loud the whole LA-to-Amsterdam flight. I feckin' love Martín's 'voice.' Kudos!" - Alex Rotaru, award-winning documentary filmmaker and playwright

"As a decades-long associate of the Chicago Outfit, I thoroughly enjoyed Roman MartÍn's book UNDERWORLD. He accurately describes 'the Life, ' and the pros and cons of becoming a mobster. But he does it in a very unique manner that will no doubt have you in stitches at times. I highly recommend it." - Frank Cullotta, co-author of CULLOTTA: The Life of a Chicago Criminal, Las Vegas Mobster, and Government Witness, and former crime partner of Tony "the Ant" Spilotro (Joe Pesci in Casino)

"As a former associate of the Colombo organized crime family, I thoroughly enjoyed reading UNDERWORLD by Roman Martín. If you are into true accounts of organized crime told with a sense of humor, this book is a must read." -- Orlando "Ori" Spado, the "Godfather of Hollywood" and co-author of The Accidental Gangster

"At the end of a global thermonuclear war, there will be two things left
on this planet: cockroaches and Roman Martín." - J.R., former federal public defender (Northern District of California)

"Hemingway, Faulkner, Steinbeck, Fitzgerald, Twain, Salinger, and Martín. No doubt history will find Don Roman taking his rightful place among the pantheon of America's greatest auteurs." - Roman Martín (no relation to the author)

Valerity
5つ星のうち5.0 A different kind of humor
2019年10月16日にアメリカ合衆国でレビュー済み
Amazonで購入
Looking to become a mobster in today’s La Cosa Nostra? Think you’ve got what it takes? Author Roman Martin has the guide for you to decide and help you be all that you can be. Based on decades of following and studying the real original gangsters, Martin has all kinds of advice to share to help you decide if the ‘made’ life is for you. I thoroughly enjoyed this take on the life, the players and the history, written with a bite as Martin gives his impressions of how the different mob guys stacked up through the years. He also shares a few insider details about different infamous things that I never knew before.

One of the people mentioned in the book also happened to be the subject of one of the shows on the Investigation Discovery channel later one evening, which was a great coincidence and it gave a lot of information on the notorious killer featured, Richard Kuklinski. You just gotta love when that happens. Martin dishes on many known mob figures and has up to date information on them. I’d recommend for true crime and mob book fans, for sure.
続きを読む
1人のお客様がこれが役に立ったと考えています
違反を報告する
レビュー を日本語に翻訳する

Ninaz S.
5つ星のうち5.0 It’s a must-read for Mafia fans!
2019年10月7日にアメリカ合衆国でレビュー済み
Amazonで購入
I bought a copy about a week ago and I couldn’t put it down – the book flies along. It’s both hilarious and disturbing as some of the carnage inflicted by the mobsters is sometimes graphic, but the humor is dark, caustic, and sarcastic. It reminded me of Pulp Fiction or Breaking Bad – some people will think it’s a comic look at the insane and unbelievable lives of these real-life characters, but others will see it as a horrific glamorization of terrible crimes. If you’re not faint at heart, you’ll love it.
続きを読む
3人のお客様がこれが役に立ったと考えています
違反を報告する
レビュー を日本語に翻訳する

Kennis
5つ星のうち5.0 David as a gift
2021年4月17日にアメリカ合衆国でレビュー済み
Amazonで購入
I'm giving it five stars even though I haven't read it I bought it for a friend as a gift and she hasn't quite read it yet so I'm giving it 5 stars but I can't give it an honest review
続きを読む
違反を報告する
レビュー を日本語に翻訳する