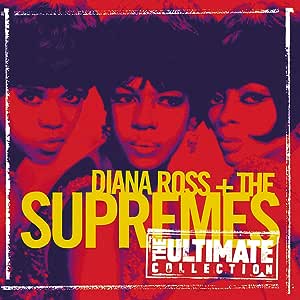 Out of print in the U.S.! The Ultimate Collection from Diva Ross and her two Supreme sidekicks is just that....the ULTIMATE Collection! This is the best single-disc compilation on the market by the chirpy trio and features more than a plethora of hits. The world is a much better place because of songs like 'Where Did Our Love Go', 'Stop! In The Name Of Love', 'I Hear A Symphony', 'Baby Love', 'You Can't Hurry Love', 'The Happening' and everything else on this CD. There's 25 great tracks here that say more in three minutes than many artists entire catalog. It's soulful. It's melodic. It's brilliant. It's the ultimate collection. Universal.

Jackie S
5つ星のうち4.0 Where Did Our Group Go
2018年5月2日に英国でレビュー済み
Amazonで購入
So MANY Greatest Hits-Best Of packages now for sale on this group of ladies.
I do think that if one wants the genuine Motown sound to replay as the masters might have , then may I suggest you only purchase their artists output on a VALID Motown-label CD or LP or an EMI licensed disc, especially if any ORIGINAL recordings were initially Mono and have been re-channeled for some sort of Stereo nonsense to please the ears.
I have many ways in my home studio to get the Mono versions back as were, but it remains a hassle to do so.
During the golden age, NOT everything was recorded in Stereo mainly because of studio and mastering costs, and for many producers, such as George Goldner, proper microphone placement was all that was needed, without mixdown or other expensive studio functions.
I still have many rate sheets from some of the old Hollywood studios, and the difference of costs between a Mono or other type recording could hurt a small label if they operated on a small budget and let's not forget the pressing costs that were still to come AFTER the recording session.
Little, if any, credit was offered to smaller labels by the pressing plants. CASH up front was how most business was done.
In The Still Of The Night as by The 5 Satins was recorded in the basement of a New Haven church on a single track machine.
At last count, the record has sold over 13 million copies, and I would HATE to hear it in re-produced Stereo now.
No reason now to list any of the low quality CD reproduction outfits OR their manufacturers here, but they know who they are, simply through all of the complaints I have read about regarding some CD reproductive quality.
That being said, we should all realize at some point, that we get what we pay for, ie:
If The Offer Sounds To Good To Be True....It Most Probably Will Not Sound Good At All...
Buy Cheap....Get Cheap

Mr. Kenneth D. Jones
5つ星のうち5.0 Supreme indeed.
2020年1月3日に英国でレビュー済み
Amazonで購入
Fabulous value for a c.d. that showcases all of the stunning hits by The Supremes at their absolute, world dominating best.
Another plus is the fact that these are the originals, and not re-recorded items. I hate it when ‘greatest hits’ compilations are anything less than the recordings as first hit the charts, they are never quite spot on. It could be just a slightly different tempo or something that you are unable to put your finger on in the musical backing.
No such problem here. A gem of a collection.

Lorraine Maltby
5つ星のうち5.0 Fab !!!
2013年11月9日に英国でレビュー済み
Amazonで購入
Parents use to play the Supremes in the car on the way to Italy when I was a child had the old cassette. It took me years to eventually find the right CD with most of the songs I was looking for except one "Whisper you love me boy" you can't win them all.
続きを読む
6人のお客様がこれが役に立ったと考えています
役に立った
フィードバックを送信中...
フィードバックをお寄せいただきありがとうございます。
申し訳ありませんが、お客様の投票の記録に失敗しました。もう一度試してください。
違反を報告
レビュー を日本語に翻訳する