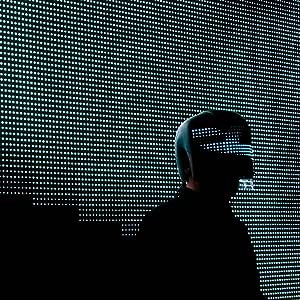 Andrew Taylor
5つ星のうち3.0 An album of two halves...
2013年1月20日に英国でレビュー済み
Amazonで購入
Squarepusher's latest album Ufabulum... It came out about a year ago and I've been listening to it on and off since. As a whole. the album feels very much an album of two halves, split right down the middle, showcasing arguably some of his best work and some of his most uninspiring.
The first track feels very much like it's designed to be euphoric and uplifting, but it fails to strike any sort of a chord with me. The next 2 or 3 songs follow similar suit with soaring synth parts and catchy (annoying) melodies. All of these songs get a similar sort of review from me, the first half of the album honestly sounds like a cross between a soundtrack to the worst Sega Saturn Game you can imagine and the kind of background music you hear when the league tables appear on Eurosport's coverage of the bobsleigh. And I cant stress that enough. Even though there are enjoyable moments hidden in there, I always get those sort of images in my head. I was very much surprised to hear the track 'Unreal Square' make an appearance during the BBC's coverage of the Olympics last year... so I can only imagine a couple of their producers had a similar feeling towards those tracks that I did. It almost feels like those songs were designed for that specifically, which makes for a rather offputting listen as an album.
'Red In Blue' acts as a sort of quiet before the storm and a significant turning point. All remaining tracks feel somewhat darker, noisier, more atmospheric, more energetic, chaotic... It's like an entirely different album altogether. Some of it could be described as an uneasy listen, but in a way that feels way more exciting and uplifting than anything the first half had to offer. Definitely 'edge of your seat' music, and each remaining track has an entirely different way off getting that across.
The track 'Dark Steering' is probably among my favourite songs from last year, and the fact I still listen to that and the rest of Ufabulum probably doesn't mean it's a bad album, I just think it's a confusing release as I love some parts and hate others... If the tracks from 'The Metallurgist' onward had been released as 'The Ufabulum EP' I'd give that EP 5 stars... no question, and if that questionable first half had been released as it's own EP with some nice colourful cover art, I dare say I'd look at that in a different perspective. But Maybe I'm over-analyzing things.
So in all, some very very good stuff, and some uninspiring 'annoying' stuff, but I guess i do find myself with a similar opinion with regards to Squarepusher's discography. I absolutely love some parts of it, and some parts don't do as much for me. But in a way I'm glad he does release his albums in the way he does. I'd chose extremes of good and bad any day over a discography of complete mediocrity.
続きを読む
4人のお客様がこれが役に立ったと考えています
違反を報告
レビュー を日本語に翻訳する

Dave
5つ星のうち4.0 Best squarepusher album in a long while.
2012年5月26日に英国でレビュー済み
Amazonで購入
Squarepusher for me has for a few years been producing albums with occasional standout moments, but nothing coherent in its entirety. Too focused on perverse sonic warfare, without good enough tunes to serve as a valid platform for the constant assault of shifting beats. At his best I've found him to be astonishingly unique and vibrant, but I feel I've been waiting for him to reach those heights again for a while now. For example, Hello Everything had some good moments, but frustratingly few of them and they felt somehow too restrained for my liking. Albums like Ultravisitor I found tedious and unlistenable.

This, on the other hand, comes out of the gate with some serious pace, and holds its own right through to the last track. The constant shifting soundscapes are still there but bent to service actual melodies and coherently structured music. Listening to the entire album in one sitting can get a bit wearing if you're not quite in the right frame of mind for it - it is harsh and relentless, but musical enough to pull it of this time, and I find myself returning to tracks like the phenomenal Dark Steering again and again and again. Highly recommended.
続きを読む
1人のお客様がこれが役に立ったと考えています
違反を報告
レビュー を日本語に翻訳する

rad88
5つ星のうち3.0 Less original then before
2012年6月18日に英国でレビュー済み
Amazonで購入
I am a big fan of Squarepusher and for me the top albums where Just Souvenir, Hello Everything. Recent Number Lucent was very cool too. However since d'Demonstrator Tom Jenkinson turns into direction I am not a big fan of. Mostly because I sense a bit of lack of invention, rythym or variety of sounds shapes. However if you liked d'Demonstrator then probably you will like Ufabulum. And as will all big creators it may happen for me, that I will start liking this album after a while.
続きを読む
違反を報告
レビュー を日本語に翻訳する

A W W
5つ星のうち5.0 The Future
2013年11月28日に英国でレビュー済み
Amazonで購入
Sound design of the highest degree, plus you can dance and hum along. This almost goes far enough, it never does not enough, rip up a frequency or two more or less and we might have a perfect album. Best you play this at a super massive marrow trembling volume for full effect, this is IMAX music, or AMAX if you will. Dark dark dark but lit up bright by imposing futuristic lazers. Deadly.
続きを読む
違反を報告
レビュー を日本語に翻訳する

Basexperience
5つ星のうち5.0 Stunning, a first-time Squarepusher listener
2013年7月17日に英国でレビュー済み
Amazonで購入
Man, this one grows on you. Same feeling I had when I first heard Aphex Twin - an initial "WTF?" gives way to your brain finally hearing the complex rhythms, hihats from hell... I'll be listening to this years from now. Infectious, energetic and fun.
続きを読む
1人のお客様がこれが役に立ったと考えています
違反を報告
レビュー を日本語に翻訳する
すべてのレビューを参照します
Amazonプライム会員ならお急ぎ便、日時指定便が使い放題
さらに、映画もTV番組も見放題。200万曲が聴き放題 。クラウドに好きなだけ写真も保存可能。
> プライムを無料で試す