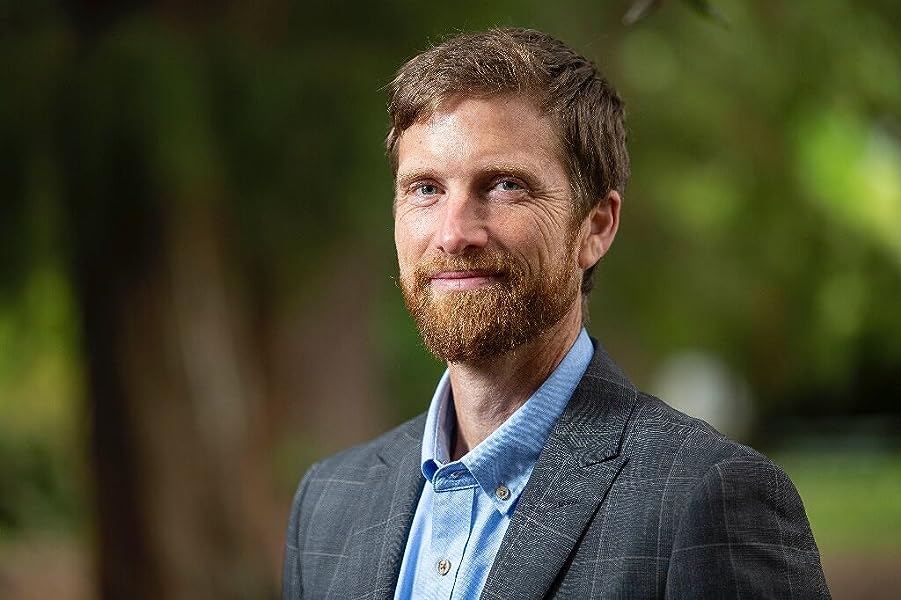 Democracy is being destroyed by an ancient evil, and modernity is in denial. In the Tyranny of Greed, Timothy K. Kuhner reveals the United States to be a government by and for the wealthy, with Trumpthe spirit of infinite greedat its helm. Taking readers on a tour through evolutionary biology, psychology, and biblical sources, Kuhner explores how democracy emerged from religious and revolutionary awakenings. He argues that to overcome Trump's regime and establish real democracy, we must reconnect with that radical heritage. Our political tradition demands a revolution against corruption.

A truly outstanding and penetrating assessment of governance in the United States today. The greed and corruption of the Trump era are captured better than in any other book I have read (and I claim to have read them all).Tyranny of Greedis both a work of true scholarship and a gripping read.--The Ret. Hon. Sir Edmund Thomas "KNZM QC"

Kuhner holds nothing back. He builds on a solid foundation of evidence about Trump's abuses of power and the outsized role of money in American politics. But then he goes way beyond that to explore Biblical views of the corrupting power of greed and the demons that may possess our president--from Satan to the Beast to Mammon. Taking readers from Hell into hope and Light, Kuhner closes with a revolutionary vision of freedom, self-government, and political equality. The topic is grim, but the prose is energetic and the ideas are fascinating. Tyranny of Greed may well prove to be the best book of the year about politics.--Benjamin I. Page "co-author, with Martin Gilens, of Democracy in America? What Has Gone Wrong and What We Can Do about It"

Tyranny of Greed is the most incisive critique yet of the Trump presidency and the system that created it. The story is brilliant, the method dramatic, and the scholarship impressive. This gripping piece of work cements Kuhner's status as one of the most original, interesting and effective contemporary scholars of U.S. constitutional law.--K D Ewing "Professor of Public Law, King's College London, author of The Cost of Democracy and Bonfire of the Liberties"

A fabulous read! If you want to know why Trump is a demon and, more importantly, why that demon also lies within us and our politics, you must read this book.--Joo-Cheong Tham "Professor, Melbourne Law School, author of Money in Politics: The Democracy We Can't Afford and co-editor of The Funding of Political Parties"

A learned and exceptionally creative meditation on our current predicament and our current president. Kuhner looks at Donald Trump, and the system that produced him, through the lenses of history, literature, philosophy, and theology. The result is explosive and vitally important.--H. N. Hirsch "Professor of Politics, Oberlin College, author of A Theory of Liberty and The Future of Gay Rights in America"

Explosive, penetrating and utterly compelling, Kuhner charts the death spiral of American democracy as it collapses into the black hole of the religion of money. Never before in human history have noble ideals been corrupted so deeply with the connivance of so many. This book lays tyranny bare for all to see--as a mirror for the human soul.--Philip Goodchild "Professor of Religion and Philosophy, University of Nottingham, UK, author of Theology of Money and Credit and Faith"

In the span of a few years we have gone from arguing over politics, to arguing about how many tens of thousands of deaths would be worth boosting the stock market. We have become accustomed to wearing surgical masks to protect us from pandemics, and gas masks to protect us from riot police. We now shrug at the most blatant displays of authoritarianism and respond to Nazi parades with 'whataboutisms.' If you're as worried about the effects of Trump's election as I am, then this brave and surprising book is for you. Kuhner opens our eyes to the historical, philosophical, and religious roots of our present crisis, inspiring us to look inward to understand how we got to this moment in time. There within, he locates not only the underlying causes of the crisis, but also the strength we need to overcome it.--Reza Aslan "Professor of Creative Writing, University of California, Riverside, author of Zealot: The Life and Times of Jesus of Nazareth and No God but God"

Many books are announcing the downfall of American democracy, but Tyranny of Greed operates on another level. It's an original and powerful work of art. Tapping into a deeper awareness, Kuhner helps us recognize this dark time for what it really is--an opportunity for rebirth. Yes, I feel shaken, but also awakened. The more people who read this book, the more transformative our national conversation will become.--Frances Moore Lappé "bestselling author or co-author of nineteen books, from Diet for a Small Planet to Daring Democracy (with Adam Eichen)"

Stunning! Amidst the avalanche of recent books about how the United States became a kleptocracy headed by a man of naked need and greed, this is the one to read. Combining deep knowledge of constitutional law, savvy analyses of political texts and events, and splendid readings of Dante, Milton, and the Bible, Kuhner reveals how the corrupting force of Mammon steadily gained the institutionalized power to choke the American experiment in democracy, almost to death. This book is as original and gripping as it is persuasive. Its agenda for transformation is essential, no matter who wins the 2020 election.--Wendy Brown "Professor of Political Science, University of California, Berkeley, author of Undoing the Demos and In the Ruins of Neoliberalism"

The sheer volume of coverage of Donald Trump and his administration can have a deadening effect--yesterday's scandal risks becoming today's shrugging new normal. But Tim Kuhner's work reminds us that this shouldn't, indeed must not, be so. By tracing the origins of Trump's deeply immoral regime to fundamental flaws in the United States' system of democracy, he both helps us to understand how that country came to its current parlous situation and what must happen to reverse it.--Andrew Geddis "Professor of Law, University of Otago, author of Electoral Law in New Zealand"

This book captures the nature of corruption in the Trump Era better than any other in print. The essence of corruption is self-involvement, self-indulgence, luxuriousness, and the loosening and discarding of the restraints of social bonds. Foundational norms of awareness of others and community responsibility are gradually replaced and ultimately overwhelmed by greed in all areas of personal and political life. The ethos of the Trump Era is materialism, impersonalism, and unabashed greed for money and power at any moral cost. How were two centuries of American idealism so suddenly and rapidly overwhelmed? This book tells us how we got here. And it tells us how we can fight the virus of corruption that threatens to destroy our shared culture and fragile democratic institutions.--Laura S. Underkuffler "J. DuPratt White Professor, Cornell University, author of Captured by Evil: The Idea of Corruption in Law"

Timothy Kuhner captures the essence of Donald Trump--and modern American politics--in this illuminating book. Trump is many things but above all, Kuhner convincingly argues, he is the embodiment of greed. And his rise to power is no accident but, rather, the predictable product of a system that ignores corruption and enables the wealthy to dominate elections. To fix American democracy, Trump's defeat won't be enough. Instead, we'll have to rebuild the wall between private capital and public power.--Nicholas Stephanopoulos "Professor of Law, Harvard Law School, co-author of Election Law: Cases and Materials"

Timothy Kuhner masterfully situates Trump's presidency in broad historical perspective. He explains how and why so many Americans have come to tolerate and justify a plutocratic system with the values of greed and corruption that it sanctions. Kuhner's penetrating analysis calculates the enormous costs of our ideological complacency in spiritual, psychological, legal, cultural, and environmental terms. Everyone should heed his call for a revolutionary solution.--John T. Jost "Professor of Psychology and Politics and Co-Director of the Center for Social and Political Behavior, New York University, author of A Theory of System Justification"

What does Donald Trump's rise to power say about the United States and the culture of greed and corruption? Tim Kuhner courageously takes on that question in this important, timely, and thought-provoking book. I highly recommend it.--John Bonifaz "constitutional attorney, Co-Founder and President of Free Speech For People, co-author of The Constitution Demands It: The Case for the Impeachment of Donald Trump"

Timothy K. Kuhner is Associate Professor of Law at the University of Auckland. He is the author of Capitalism v. Democracy: Money in Politics and the Free Market Constitution (SUP, 2014).
１分以内にKindleで Tyranny of Greed をお読みいただけます。

Benjamin I. Page
5つ星のうち5.0 The liveliest book yet onTrump and plutocracy.
2020年9月3日にアメリカ合衆国でレビュー済み
Amazonで購入
Kuhner holds nothing back. He builds on a solid foundation of evidence about Trump’s abuses of power and the outsized role of money in American politics. But he goes way beyond that to explore Biblical views of the corrupting power of greed and the demons that may possess our president — from Satan to the Beast to Mammon. After light-touch detours into Milton’s account of Satan’s fall and plot against mankind, and then Dante’s depiction of the eighth circle of Hell, Kuhner leaves behind plutocracy and kleptocracy. He emerges From Hell into hope and Light, and closes with a revolutionary, Jeffersonian vision of freedom, self government, and political equality.
The topic is grim. But the prose is energetic and fast-moving. The ideas are fascinating. This engaging essay may well prove to be the best book of the year about politics.
続きを読む
4人のお客様がこれが役に立ったと考えています
違反を報告する
レビュー を日本語に翻訳する

Peter Connolly
5つ星のうち5.0 Insightful!
2020年9月16日にアメリカ合衆国でレビュー済み
Amazonで購入
Kuhner was able to analyze the current state of disarray in the Trump administration from different points of view and offer insight in how to overcome.
続きを読む
違反を報告する
レビュー を日本語に翻訳する