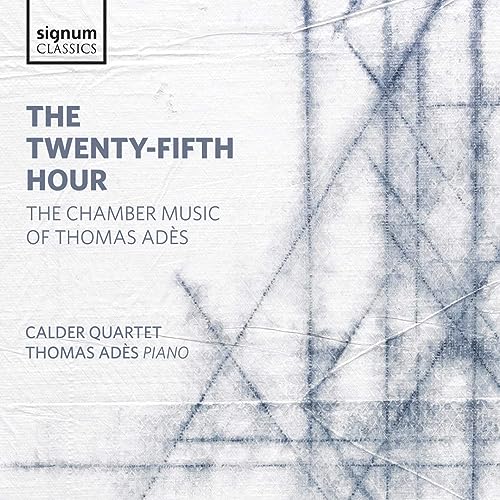 The Twenty-Fifth Hour: The Chamber Music of Thomas Adès

smartyfun
5つ星のうち5.0 Two Quartets & a Quintet add up to a great CD
2015年9月7日に英国でレビュー済み
Amazonで購入
This CD contains nice collection of compositions by Thomas Adès consisting of two string quartets and a piano quintet all performed by the Calder Quartet with Thomas Adès playing piano for the quintet.

The earliest piece is Arcadiana, a quartet, composed in 1993 and this is also available on the  Adès: Living Toys  budget priced CD. Arcadiana has become an established piece in the repertory of quartet music and was included in the debut CD of the Calder Quartet  Maurice Ravel-Thomas Ads-W.A. Mozart

Arcadiana is in seven sections which are all based on scenes inspired by their titles. The odd-numbered sections all have a water theme. For instance, it's possible to discern raindrops (plucked strings) in the third section "Auf den Wasser zu singer" (to be sung on the water). However, this music is modern and impressionistic and open to the widest interpretation. Although there are moments of simple melodic beauty, these are held within an array of complexity and richness, so you are required to allow yourself to be immersed into this sea of sound to appreciate it. I think it becomes calmer towards the end, particularly the sixth part which is quite meditative and almost soporific.

The more recent quartet, The Four Quarters, was composed in 2011 and it is a world premiere recording on this CD. It is in four sections which are named after times of the day. This music is more tonal and melodic than Arcadiana. The first section "Nightfall" is quite relaxing and melancholic. This is followed by "Serenade: Morning Dew" which is contrastingly lively with strings being plucked mostly. Then "Days" begins with a minimalistic repetitive structure which never quite develops into anything exciting, perhaps reflecting life generally. "The Twenty-Fifth Hour" is more joyous and optimistic perhaps representing the future, which finishes with a nice chord- happy ending??

So there are 2 nicely contrasting pieces to explore. I prefer the grittier and more fierce Arcadiana but that may because I'm more familiar with it.

The Piano Quintet (2001) has appeared on a previous CD  Adès / Schubert: Piano Quintets  and it has a similar sound to Arcadia. The piano adds another layer- sometimes leading, sparring or drifting off into the crowd of strings.

Overall, this CD provides a modern experience of chamber music. Not to everyones taste, but worth exploring.
続きを読む
4人のお客様がこれが役に立ったと考えています
違反を報告
レビュー を日本語に翻訳する