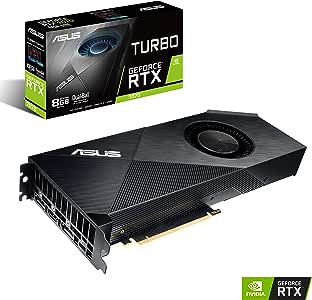 C Long
5つ星のうち4.0 It is exactly what you expect
2018年12月8日にアメリカ合衆国でレビュー済み
Amazonで購入
My overall usage for this card is 1440p gaming with my desired target fps sitting around 100-120 for the games that I play. So far on BF5, the tomb raider games, OW, R6 siege, and BO4, I'm hitting that no problem. So for the most part I'm satisfied because it is performing as I was hoping it would. This is essentially with most of the settings at max or high with very little compromise. In some cases like with OW, I'm probably hitting CPU bottleneck more than anything else.

In terms of thermals, it is satisfactory considering that it is a blower card. I've only had the card hit 80 degrees once or twice, but I actually didn't notice any performance impact. That may be because I'm not pushing it that hard, but overall I haven't noticed any issues. To put this in perspective, my previous GTX 1060 hit similar temperatures from time to time even though it was a traditional open fan card, and I never ran into any problems either.

I have yet to really try out ray tracing because as of this review it's really only available on BFV. And to be frank, I don't see much value in tanking my framerate for some visual effects that I won't even notice. If I actually turn it on in the future, I'll update this.

I got this card with the free BF5 promotion. Just FYI they don't email the code to you till after card is scheduled to arrive, and the system didn't work for me, so I had to contact amazon customer support to get it sorted out.
続きを読む
4人のお客様がこれが役に立ったと考えています
役に立った
フィードバックを送信中...
フィードバックをお寄せいただきありがとうございます。
申し訳ありませんが、お客様の投票の記録に失敗しました。もう一度試してください。
違反を報告
レビュー を日本語に翻訳する

Wes Shull
5つ星のうち5.0 First card was hot...but RMA came fast and second is fine (UPDATED)
2018年12月12日にアメリカ合衆国でレビュー済み
Amazonで購入
When I got mine, it hit 85C and throttled all the time. I then had artifacts and on boot up I could not get Windows to recognize the card as OK (Device Manager stated there was a problem with it). I was stuck at 800x600. I asked for an RMA, got one immediately, and they sent a new card within a day. The new card is as advertised. It's a low-end 2070 that you can overclock and doing so pushes temps to 75C and the acoustic footprint is what you expect. The margin for Asus on these has to be either a few dollars or non-existent so you get a low-end, loud cooler.

However...the four-star rating is because I bought this knowing I am going to put it under water and didn't care about temps nor the fan noise. I wanted the lowest price I could get coupled w/an EKWB waterblock and will have it under water soon. That will mitigate the noise and the temps. I'm also currently getting 15-25% better performance than my old 1070 card and for me...that's worth it (should be able to push clocks a tad-faster under water too).

UPDATE 3/15: Card has been great so I updated it to 5 stars (love Asus). Got a nice performance boost over the old GTX 1070 and the EKWB waterblock worked as it should. I push 100fps all the time in Destiny 2 (on a 34" 3840x1440) and after patching I get a consistent 75fps in Anthem. One note for EKWB users...the block fits fine but can slightly interfere w/video ports so you might have to slightly bend the attachment bracket just a tad when plugging in your monitor.
続きを読む

urban peach
5つ星のうち5.0 Works great for mini-itx build
2018年12月4日にアメリカ合衆国でレビュー済み
Amazonで購入
My card options were limited with a small case, but this card was a perfect upgrade for me. I'm still running an older i7 3770k cpu with equally old mobo and 450w PSU, but this card still let's me play my favorite games (BFV, Tomb Raider, WoW, etc) at max settings (no overclocking) on 27" FHD 240 hz predator monitor at 70+ fps. I only game around 3 hrs at a time (don't stream or multi-task), but never had this card get too hot. Typical blower-style fan noise, but not enough to bother me. Only a week testing, so will report back if any issues down the line. So far, very pleased with the purchase.
続きを読む
3人のお客様がこれが役に立ったと考えています
役に立った
フィードバックを送信中...
フィードバックをお寄せいただきありがとうございます。
申し訳ありませんが、お客様の投票の記録に失敗しました。もう一度試してください。
違反を報告
レビュー を日本語に翻訳する
その他の国際レビューを読み込む

Adam W.
5つ星のうち3.0 HOT
2018年11月30日にアメリカ合衆国でレビュー済み
Amazonで購入
This being a blower card I knew it would be hot but at 77 degrees C with NO RTX CORES OR TENSOR CORES active is way too hot. The thermal transistor junction max is 81 degrees C and I can only imagine once more the tech built into this card is more supported it will almost certainly thermal throttle. It is a nice looking card though and the performance was as expected somewhere between a 1080 and 1080ti (actually closer to the 1080ti in my tests)
続きを読む
2人のお客様がこれが役に立ったと考えています
役に立った
フィードバックを送信中...
フィードバックをお寄せいただきありがとうございます。
申し訳ありませんが、お客様の投票の記録に失敗しました。もう一度試してください。
違反を報告
レビュー を日本語に翻訳する

Ed Lujan
5つ星のうち5.0 Hot and Heavi
2019年3月27日にアメリカ合衆国でレビュー済み
Amazonで購入
This thing get hotter than a preachers throughout on a Sunday Mass....