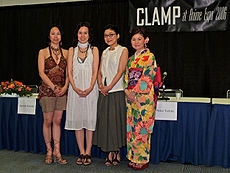 Mr. P. N. C. Jay
5つ星のうち5.0 A rare happy ending for CLAMP
2011年10月4日に英国でレビュー済み
Amazonで購入
This volume finally brings the convuluted story of our travellers to a conclusion. But it starts with the two "clones" of Syaoran and Sakura, who find themselves in a version of our world, it seems, re-born but with their memories of their previous life (because they were clones, they can't be "reincarnated", but the price for their new life together was paid by Clow Reed and Yuko). Somehow, they have become the parents of "original Syaoran", and they also surrender themselves to being sealed inside a magical prison for the sole purpose of finding a way of breaking the otherwise endless circle this created.

It's really complicated to follow everything about the various Syaorans and Sakuras, nor is it obvious at the point of the battle as to why Fei Wang Reed is so desperate to resurrect Yuko, beyond possibly proving his superiority over Clow. The four "kids" use their magic to try to rebuild the worlds that Fei Wang's wish would destroy, but there's also the threat of the price that Fei Wang told Syaoran he would have to pay because of his desire to save Sakura at any price.

The battle gets very messy, and even when it's over, Syaoran and Sakura have both lost almost as much as they've gained, because of Syaoran's chosen "price". Yet they finally declare their mutual love and affirm each other, before we're given the concept of how things may play out for years to come.

Still, as CLAMP goes, it's really a happy ending. Really.

Tristan A. Hayes
5つ星のうち5.0 A Riveting Final Volume for an Epic Series
2010年11月24日にアメリカ合衆国でレビュー済み
Amazonで購入
Tsubasa vol 28 comes as a shocking ending to the epic series. Firstly the volume comes at a whopping 276 pages, virtually double sized. I think including so many pages is a pretty decent trade off for the potential of colored pages (it would have been nice to have colored manga pages at least in this final volume) because the story is so nice.

I will avoid spoilers but this volume certainly wrapped up hanging plot points and finally clarified the motives and purposes for some of the characters. The action was as amazing as it has been from recent volumes in terms of the magic usage. I also think that the translator, who has been here for all of the volumes, William Flanagan did an excellent job at making it clear and helping to sort out who was speaking, with the "images" of two characters and such. He also left a potentially heartfelt message at the end of the volume, it almost feels as if he was there with us the whole time through these many years of reading the series.

This volume had me a bit emotional and teary eyed with joy because the two characters finally admitted their feelings for one another; simply beautiful. This is a thrilling and truly amazing conclusion for the series and makes me want to reread it from start to finish.
続きを読む
4人のお客様がこれが役に立ったと考えています
違反を報告
レビュー を日本語に翻訳する

Mr. V. Lee
5つ星のうち5.0 A wonderful end to a long series
2010年12月20日にアメリカ合衆国でレビュー済み
Amazonで購入
Well where yo start? I've started reading Tsubasa Reservoir Chronicles a few years back. Of course I have changed as a person and matured over these years.
Like any long series/game/adventure you feel a little sad inside to see it end. But glad there is an ending and not a hiatus/unfinished outcome like many series ("X" I'm looking at you - from CLAMP also).

This volume continues where the previous left off, but with a bit of background development on the Syaoran/"Syaoran/Sakura... it was almost confusing, but you get its all very smartly conducted to remind us of the earlier events in the series.

In a nutshell, a good plot twist and a good ending left me quite fullfilled. Actually, I also read xxxHOLiC which runs alongside the Tsubasa series. The interaction between Watanuki, Yuko (xxHOLiC) and Syaoran (Tsubasa) becomes key to the final stages of the story.

Read for yourself and make it a happy memory :)
I just hope the continuation animated series of Tsubasa and xxxHOLiC would do them justice. Tsubasa has some exciting fight scenes, and I found the anime thus far quite watered down.