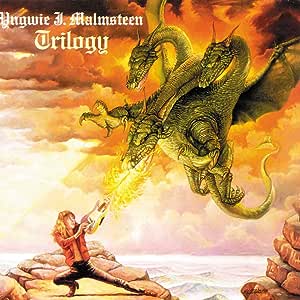 ratmonkey
5つ星のうち4.0 Magic
2011年11月3日に英国でレビュー済み
Amazonで購入
Not quite as heroic as the previous Marching Out but still a quality example of why Yngwie was so good. Many people think it is because of the flawless solos and constant technical excellence but at the time it was the trad/power-metal song structures that drew the faithful. Marching Out was as chunky and tight a Scandinavian beast as you're ever likely to behold (almost like a soundtrack to The Beastmaster or Hawk the Slayer). Trilogy is more the sound of the renaissance. There are still elements of the viking rock but the transition to glam/power stylings was very evident here. This was no bad thing as the music was still as gloriously catchy and cheesy as its predecessor, but it missed a spark that would later arrive when the transition became complete with Odyssey.

Stand out tracks are the excellent 'You Don't Remember...', 'Queen in LOve' and 'Magic Mirror'. The rest are all good but the songs are not as strong as they should be. Superficially though, the album cover artwork is possibly one of the best ever.

Cheesy heavy rock in a very traditional way (a la Dokken) but all the better for it.
続きを読む
2人のお客様がこれが役に立ったと考えています
違反を報告
レビュー を日本語に翻訳する

Amazon Customer
5つ星のうち5.0 love it!
2016年12月19日に英国でレビュー済み
Amazonで購入
Well packaged and arrived on time. Track 6 - Fire! love it!!!
Great to drive to...takes me back to the 80's.
I bought the vinyl version back in the day and like most people still have the record but don't have the deck.
After reliving the past through you tube I decided to buy the CD - and since then, I haven't put down the 'Air Guitar!'
続きを読む
1人のお客様がこれが役に立ったと考えています
違反を報告
レビュー を日本語に翻訳する