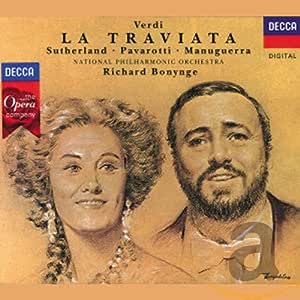 It's hard to resist such a starry cast, and Sutherland-Pavarotti fans will want this no matter what. Luciano's legions will find more to crow about, though, for he's in fine voice, creating an Alfredo to remember with his distinctive lyric tenor endowing the arias and even the recitatives with a bright sound and excellent diction that lets you understand every word. But Sutherland was a better Violetta in her first traversal of the role. By 1979, when this set was made, her impressive high notes remained intact, but the rest of the voice was showing wear, her diction was muffled, and dramatic values were underplayed. Manuguerra's a fine Germont and Bonynge's conducting is unsteady, tending to drag in the latter acts. This set will give pleasure to many, but do investigate those of Callas and de los Angeles on EMI and Cotrubas with Kleiber on DG, among others. --Dan Davis

KC
5つ星のうち5.0 The Best La Traviata recording. Stunning!
2020年4月18日に英国でレビュー済み
Amazonで購入
Wow, this opera CD set has to be one of the top recommendations. Sutherland is so impressive and vocally agile. Her high notes are stratospheric and she is at the top of her game here. Her pronunciation is much better here than in the 1960s studio recording. Pavarotti is glorious too and Manuguerra makes a beautifully toned Germont.
This is now my desert Island La Traviata.

V.
5つ星のうち5.0 Divine
2014年3月26日に英国でレビュー済み
Amazonで購入
This c.d. has been in my possession for years. I purchased this for a friend who just saw a production done
in our city. It was recommended to me as a classical opera and it's magnificent. The best part is that there are
translations in English, French, German for the Italian challenged.

Viva Verdi
5つ星のうち4.0 A Showcase
2016年9月9日に英国でレビュー済み
Amazonで購入
I had my doubts over this recording at first as the first act just seemed a Sutherland/Pavarotti showcase - both given free reign to show their stuff. You cannot deny the trumpet-like sheen of Pavarotti in his prime and in an ideal Verdi role. His 'O mio Rimorso' is tremedous - a thinly disguised Di Quella Pira. I was never a huge Sutherland fan but her diction here is better than her first Traviata from the 60s - her voice held exceptionally well. Her acting too is greatly improved - the spoke lines before Violetta's death are heart-rending. Manuguerra is the big hit here - he had a hefty, full-blooded voice but he vocally dances through his first delicate exchanges with Violetta in Act 2. He is the gentle persuader, but when needs be has the vocal force to convince. His 'Di Provenza' is one of the finest renditions I've heard. It's a great pity his Rigoletto was never recorded (his Nabucco and Scarpia are tremendous).

Bonynge was an excellent conductor and he brings out all the textures in the score with the National Phil. There are no cuts to the score (as with Sutherland's first Traviata - the first to do so) The clarinet during Violetta's letter writing stayed with me - dramatic and beautifully sustained. I had some minor gripes - Oliver's thin-voiced Gastone - but it's an excellent recording and worth a listen. Just shy of 5 stars.