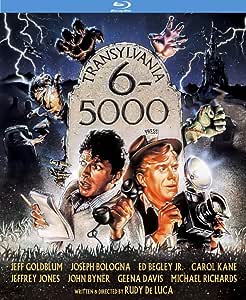 David E. Baldwin
5つ星のうち3.0 High Cheese Factor
2018年10月19日 - (Amazon.com)
Amazonで購入
"Young Frankenstein" is Mel Brooks' masterpiece. This entry by Brooks' acolyte Rudy De Luca pushes that flick further into the stratosphere. You can't really call this one parody because I'm not really sure what it's satirizing. This affair has its share of laughs, though. I felt like I was watching an episode of "Merv" or "The Tonight Show with Johnny Carson" with stalwarts like John Byner and Teresa Ganzel and the like frolicking through Yugoslavia. Gawd, Seth MacFarlane has to be the only other person who remembers this lot. Where was The Unknown Comic and Gene-Gene the Dancing Machine when they needed them? Seriously, good early efforts by Geena Davis and particularly Michael Richards demonstrating the inspired lunacy he latter assayed on "Seinfeld". The flick is too disjointed to recommend wholeheartedly but it has its moments.
続きを読む
10人のお客様がこれが役に立ったと考えています
レビュー を日本語に翻訳する

Rick James
5つ星のうち2.0 Weak Script
2019年10月31日 - (Amazon.com)
Amazonで購入
While it's fun to see some big name actors from now and back in the day, the script is terrible. There's wayyyyyyyy funnier and better movies from the same time period. It rises to mild amusement at times but not more than that. I felt it was a waste of time. I enjoy corny jokes when they're done well but this movie wasn't. Overall the movie was very amateurish in every aspect. The theme song, which sounds like an Oingo Boingo ripoff of sorts, was the best part. Go watch "Weird Science" or something. Now THAT'S worth 5 stars. This? No. Uh uh. I guess I'm not part of the "cult" for which this movie is a "classic".
続きを読む
7人のお客様がこれが役に立ったと考えています
レビュー を日本語に翻訳する

Don Gray
5つ星のうち2.0 All the stars in this couldn't save it...
2019年10月31日 - (Amazon.com)
Amazonで購入
Really not a good movie despite all the comedic stars in it. The jokes were very tongue-in-cheek style one liners that might have been funny in the 1960s but really not that funny by 1985 when this was released.

A few jokes worked but most were really an overworked effort by the writers to work them into the plot.

Some of the redeeming actors were the ladies. Gena Davis in a really hot vampiress outfit looking fine although terrible scripting. Carol Kane as an overly worshiping servant's wife was hilarious. And Teresa Ganzel as a sexy mom with a wild side.

The rest left a lot to be desired. Especially the monsters and Dr. Jekyll character. Just not that funny and actually a bit annoying to watch. Just way too cheesy. But it was none-the-less good to see some of the comedy Giants of the 80s again. I just wish they would have got better scripts and lines and jokes.

Wasn't a complete waste of an hour and a half but I sure wouldn't want to see it again.
続きを読む
4人のお客様がこれが役に立ったと考えています
レビュー を日本語に翻訳する

Loverwithoutlove
5つ星のうち5.0 The next generation needs to know this funny, silly movie!
2018年9月2日 - (Amazon.com)
Amazonで購入
My six kids as well as my husband and I watched this silly movie over and over on "movie night". We took turns picking a movie and this one sure was a favorite pick. That was many years ago but we still occasionally quote lines from the movie when talking to one another in general conversation followed by a good belly laugh. So I had to buy this for my oldest son for his 40th birthday. He was thrilled.
続きを読む
8人のお客様がこれが役に立ったと考えています
レビュー を日本語に翻訳する

Kevin Dudley
5つ星のうち5.0 This review pertains to the KL Studio Classics bluray
2020年2月17日 - (Amazon.com)
Amazonで購入
The 1985 cult classic "Transylvania 6-5000" was released originally to mostly negative reviews and lackluster box office. The fan base has grown steadily for the film during the intervening years. While it does have some issues that keep it from being truly great, it is still a lot of campy fun featuring a terrific cast. Jeff Goldblum and Ed Begley Jr. have good comedic chemistry. Michael Richards is zany and unhinged. Geena Davis is funny, incredibly sexy and gorgeous. Jeffrey Jones is appropriately smarmy. John Byner and the adorable Carol Kane make an inspired comic duo. Overall, I have always enjoyed the film and it continues to make me laugh..

KL Studio Classics brings the film to blu-ray for North America audiences sporting a brand new 4K restoration. The film is presented in its original 1.85:1 aspect ratio utilizing the AVC codec on a dual layer disc featuring a beefy bit rate hovering between 37 and 38 mbps. Overall the film looks fantastic. It does not appear any digital tinkering was done as the movie features a natural grain structure. The movie has always had a muted look in terms of overall color saturation but detail is terrific along with perfect contrast and black levels. The red shirt that Jeff Goldblum wears near the beginning of the film really pops so when colors are more prevalent they look great. Flesh tones look accurate. Fans should be ecstatic with how great the movie looks on this disc. Kudos to the team behind this superb restoration!

Sound is presented in 2 channel master audio. English subtitles are included for the hearing impaired.

I wish that some interviews could have been done for this particular blu-ray but the commentary track is very informative and well worth a listen. A moderator might have prevented some of the occasional gaps of silence but overall it is good.

"Transylvania 6-5000" fans should pick pick up this disc without hesitation. The film looks fantastic and more than likely the best it ever has. Extras are slim but it is the presentation of the film itself that is always of utmost importance first and foremost. Well worth picking up if you have not already imported the movie on blu-ray from across the pond. It's good, ya? Is funny?
続きを読む
1人のお客様がこれが役に立ったと考えています
レビュー を日本語に翻訳する
Amazon.comのカスタマーレビューを見る(249) 5つ星のうち4.2
Amazonプライム会員ならお急ぎ便、日時指定便が使い放題
さらに、映画もTV番組も見放題。200万曲が聴き放題 。クラウドに好きなだけ写真も保存可能。
> プライムを無料で試す