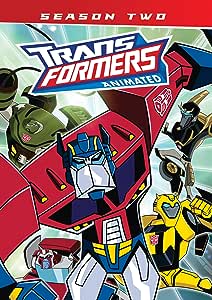 The Transformers Animated series continues to reinvent the venerable robot-action franchise in fresh and often inventive ways, as evidenced by the adventures compiled in its sophomore season. The action picks up directly after the conclusion of Season 1, during which the city of Detroit was leveled in a battle between the Autobots and the Decepticons. The cause of that fight--the AllSpark, source of life for all Transformers--was also destroyed, but all parties soon discover that the cube exists in fragmentary form in various locations around the globe. The recovery of these pieces naturally forms the crux of Season 2, though there is also the issue of The Key--the second greatest power in Transformers lore, and which currently resides in the precocious form of pre-teen Sari Sumdac. The Autobots must also concern themselves with protecting their precious human charge and worry about Starscream (voiced by Tom Kenney of Spongebob Squarepants), who harbors both a fragment of the AllSpark in his body and a long-simmering grudge against both the Autobots and Decepticons. If that sounds like a lot to digest, it's not--each episode neatly advances the central storylines while providing the required level of Transformers action and intrigue. The main strike against the show may be its overly stylized character design, which tends to rend humans in curious ways. That, however, should have only minimum impact on the show's core audience of younger viewers and franchise devotees. All 13 episodes of Transformers Animated's second season are contained in the two-disc set; a pair of commentaries on the final two episodes by the show's production team should prove interesting to those interested in the creative and conceptual aspects of the show. Viewers may find the two shorts on Disc 1, which take a decidedly offbeat approach to the characters, amusing or completely irrelevant. --Paul Gaita

After the rise of Megatron and the battle that cost the Autobots the Key in Season One, the Autobots find themselves in a big mess. Not only do they have to clean up the city, they must also restore their good image and the faith of the citizens of Detroit. Meanwhile the Autobot Elite Guard appear for the ALLSPARK only to find out that it's been blown to pieces and the quest for those pieces begins--In Transformers Animated Season Two the fates of CYBERTRON and Earth lie in the balance as OPTIMUS PRIME and his AUTOBOTS battle MEGATRON and his DECEPTICONS in a fight to the finish.

Snowella
5つ星のうち4.0 A Second Good Romp
2009年3月17日にカナダでレビュー済み
Amazonで購入
This season is almost as good as the first. Lots of action, laughs, and even a couple of character study-type stories. The main threads of the season are Sari's search for her father, everyone hunting for pieces of the Allspark, and Megatron trying to complete a space bridge.

We get to meet the Elite Guard that was mentioned so many times in Season 1. The first three episodes introduce a large part of Optimus' past with the Guard, especially his interaction with Sentinal. And we get to see Jazz! An excellent trio of stories, especially where the Headmaster makes a return.

There's another episode where the Constructicons show up, one in which we see how Bumblebee and Bulkhead met (with a special appearance by a certain 'bot), another where Starscream is forever trying to defeat Megatron (with hilarious results), and an episode dedicated to Prowl and what he could have been if he had taken up Lockdown's offer. A later episode has the return of a G1 character, complete with the original voice, which will give any fan of the original cartoon a thrill.

And speaking of Prowl, this season is the first time we get to see him actually transform. If you were paying attention, the audience never got to see him with a transformation sequence in the first season. This season, we see it once.

My only issue: The plot of breaking the Allspark and hunting for the pieces with a specific person/object is almost an exact duplicate of the Inuyasha main storyline.

Overall, if you enjoyed Season 1, you'll definitely like Season 2. Two thumbs up!

Colin
5つ星のうち4.0 Good product, great service
2011年11月13日にカナダでレビュー済み
Amazonで購入
I'm not going to get into the details of the show here, if you're ordering Season 2 odds are you've seen Season 1 and have decided you like it.

I just want to say I ordered this as a last minute birthday gift for my son. I placed the order on a Friday with his birthday being exactly a week from then, and I received it on the Monday. I couldn't have been more pleased! Thank you!
続きを読む
役に立った
フィードバックを送信中...
フィードバックをお寄せいただきありがとうございます。
申し訳ありませんが、お客様の投票の記録に失敗しました。もう一度試してください。
違反を報告
レビュー を日本語に翻訳する
その他の国際レビューを読み込む

K. deAntonio
5つ星のうち5.0 Just give it a CHANCE!!!
2009年6月28日にアメリカ合衆国でレビュー済み
Amazonで購入
I really like Transformers, a lot! I was there at the dawn of the G1 Series, and have seen almost every other (Japanese) Transformer series that followed, including the very bad attempts at adapting a few of these series for the U.S. Though none of these series were on par with even the slowest/silliest G1 Episodes! Beast Wars, & Transformers: Armada were fun, for the most part and had some of the "spirit" of the G1 series, but weren't quite there. Now we have the newest series: Transformers Animated. I saw some of the early designs for the "new" versions of the classic characters at the San Diego ComicCon a few years ago, and thought that they might be a little too cartoony, but they still looked kind of cool. Although, I still cannot stand Optimus Prime with a mouth!!! Anyway, I started watching this series with my nephews, and found myself really enjoying the stories (simple as they are), and the animation as well. The first season is good, and the second season is a bit better. So, if you haven't watched any of this series, please give it a try. You might enjoy it more than you think you would!
続きを読む
12人のお客様がこれが役に立ったと考えています
役に立った
フィードバックを送信中...
フィードバックをお寄せいただきありがとうございます。
申し訳ありませんが、お客様の投票の記録に失敗しました。もう一度試してください。
違反を報告
レビュー を日本語に翻訳する