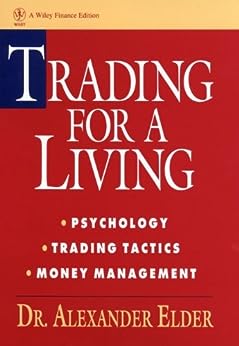 ALEXANDER ELDER, MD, was born in Leningrad and grew up in Estonia where he entered medical school at the age of 16. At 23, while working as a ship's doctor, he escaped from a Soviet ship in Africa and received political asylum in the U.S.A. He continued to work as a psychiatrist in New York City, served as book editor of The Psychiatric Times, and taught at Columbia University. After becoming involved in financial trading, Dr. Elder published over 50 articles, software, and book reviews, and spoke at many conferences. In 1988 he founded Financial Trading Seminars, Inc., an educational firm for traders.

An eminent futures trader explores crucial factors in the markets that most experts overlook--time, volume and open interest--and describes little-known indicators to profitably track them. Covers all the popular technical approaches to futures, options and stock markets including Elliott Wave, oscillators, moving averages, Market Logic, point-and-figure charting. Explains why most traders sabotage themselves and how to avoid doing the same.
--このテキストは、cassette版に関連付けられています。

P.
5つ星のうち5.0 Timeless wisdom
2020年8月25日に英国でレビュー済み
Amazonで購入
I found Dr Elder's book very helpful and comprehensive, covering topics from the psychological factors that drive price movements to in-depth review of indicators and finally how to put all that together in a few trading system examples. Elder also share a lot of good tips on risk management along the way. His background as a psychiatrist add a very interesting dimension to the book. Despite being published in 1992, I found most of the content still very relevant for today's markets.
続きを読む
1人のお客様がこれが役に立ったと考えています
違反を報告
レビュー を日本語に翻訳する

Mark Speed
5つ星のうち5.0 Essential reading if you are to succeed
2015年2月20日に英国でレビュー済み
Amazonで購入
I don't think this is necessarily a book for beginners. However, it's a book that beginners should read. You will learn that it's all about hard work, and that the folks who sell you systems are selling you fool's gold. (I learnt this the hard way, and then had it demonstrated by my mentor.) You'll also learn exactly why you will fail, and what to do to turn yourself into a successful trader.

One of the best and most comprehensive books I've read on trading - and that's saying something. It was expensive (£55, c.$80) but worth every penny. The author is a doctor who escaped to the US from the former Soviet Union, became a psychiatrist and then a very successful trader. I bought this book for its comprehensive section on trading psychology. Alex Elder tells it like it is, in very plain terms. If you trade, you are your biggest enemy. He tells you what to do about it from within quite a harsh frame of reference: that of Alcoholics Anonymous.

It misses out on that fifth star because it has not been updated since 1992. The result is that it's very much a pencil-and-paper approach to trading signals, and there's no mention of the internet at all. That didn't bother me too much, but I think it would make some readers feel a bit robbed. On the plus side, he actually talks through the psychology of all the indicators. For me, that was a huge bonus. Even though I'm not big on indicators, the people I trade against are - so I have to know them and read the moves of the crowd.

Actually, I'm going to give this five stars. It's a rare thing for me to start re-reading a book on the same day I finished it.
続きを読む
3人のお客様がこれが役に立ったと考えています
違反を報告
レビュー を日本語に翻訳する

N. Burgess
5つ星のうち5.0 A superb book for technically-orientated traders
2008年4月12日に英国でレビュー済み
Amazonで購入
This book really opened my eyes to the power of technical indicators as real world trading tools. Dr Elder very clearly explains the important inidicators and how to adapt them to your trading method. He also explains some new indicators that he devised himself, as well as the importance of analysing markets in different timeframes. He also spends a huge amount of time on trader psychology which he is very well qualified to do being a professional psychologist. His psychological insights are fascinating and a must read for anyone serious about trading.
続きを読む
3人のお客様がこれが役に立ったと考えています
違反を報告
レビュー を日本語に翻訳する

SuperSen
5つ星のうち5.0 Important book!
2017年4月15日に英国でレビュー済み
Amazonで購入
Really enjoyed reading this book it has enhanced my trading mentality. Alexander gives advice on how to deal with trades physcologically well and what strategies work best when trading e.g how much money should be risked per trade.