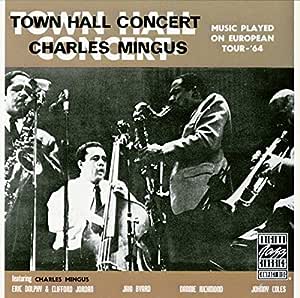 Jeff
5つ星のうち5.0 Town Hall Charles
2013年8月14日 - (Amazon.com)
形式: CDAmazonで購入
Another great concert. A must have for any serious Mingus collector The line-up is incredible, as is the leader, Charles Mingus
続きを読む
レビュー を日本語に翻訳する

Aaron G. Zeller
5つ星のうち5.0 Records don't get any better than this!
2015年7月17日 - (Amazon.com)
形式: CD
I stumbled upon this album in 1999 when I saw it in a friend's collection at the recording studio I worked at in New Orleans. I was a professional sound engineer for 12 years and I play music so I'm well trained in critical listening and the like. I'm a big fan of pre-1970's jazz, from traditional standards all the way to the avant garde styles of guys like Rahsaan Roland Kirk and Miles Davis's electric years. Charlie Mingus, Duke, and Louis Armstrong hold particularly special places in my heart as composers (the former two) and entertainers (the latter two). It's extremely rare that I make statements like this, however, this record is perhaps the best overall live recording I've ever heard, jazz, rock, classical or otherwise.

Firstly, the individual performances of the musicians in consort with the collective performance is second to none. I've heard many of the performances of these same compositions from this same group of musicians (minus Johnny Coles after he became ill) on the subsequent 1964 European tour, and this performance is far and away the best. I don't know what was in the air that night, if the songs were just fresh or what, but the guys were so locked in to each other that the phrasing, mood, and emotion are at times literally breathtaking. We are just lucky that they happened to be rolling tape that evening in April 1964.

Secondly, the recording itself is fantastic. I don't have the liner notes handy to check who was in charge, but the engineers created a soundscape that absolutely draws you in. The tone, balance, and sonic spectrum of each instrument is at once large, lush, and detailed. This level of quality is seemingly rare for pre-1970's live jazz recordings done outside a recording studio.

These two factors come together to make Town Hall Concert an absolute gem of a record. I agree with another review here that this is absolutely a desert-island-record for me. If I had to choose only one jazz record, and that would be an extremely tough choice, it would either be this or the Louis Armstrong Hot Fives and Sevens Anthology (two completely different records). I keep looking for different recordings of these same compositions to be as incredible as this performance and I've not even come close to finding one as perfect as this. The ONLY complaint I have is a rather obvious fade out and edit in the middle of Praying With Eric (Meditations) that was likely done due to length limitations (so that the entire song could fit on one side of an LP). It's not poorly done, I just wish that I could hear the entire performance unedited because of how incredible this performance is. I wonder if those original tracks still exist somewhere without the edit?

For a while this was a very difficult record to get a hold of. I'm glad to see that once again it's out there for people to buy with relative ease. GO BUY THIS RECORD!
続きを読む
1人のお客様がこれが役に立ったと考えています
レビュー を日本語に翻訳する

fluffy, the human being.
5つ星のうち5.0 my current mingus favorite.
2007年2月23日 - (Amazon.com)
形式: CD
just the other day i kicked out a humble little review of the mingus album "the black saint and the sinner lady," which i stated might very well be his best recording. well, today i listened to this album (town hall concert) and i'm ready to declare it his best. that's the kind of impressionable knucklehead i am! anyway, the problem (and what a great problem) with mingus recordings is that so many are great; thus a change in the wind might tip you from one favorite to another. but "town hall concert" is truly a classic jazz recording. consisting of only 2 tracks, "so long eric" and "praying with eric" (aka "meditations"), the whole thing runs about 45 glorious minutes. "so long eric," is 17 plus minutes of swinging creativeness. an upbeat piece of music that's loose and powerful and full of energy and joy. "praying with eric," is the more complex composition, with various moods and tempos and textures: it clocks in at 27 and a half minutes. the musicians are all incredible throughout, but it's eric dolphy and clifford jordan's sax playing that really stands out here. mingus gets the emotional best out of these two players, and if you've never heard either of them before, you will want to search out their own recordings after hearing this. an album not to be missed.
続きを読む
2人のお客様がこれが役に立ったと考えています
レビュー を日本語に翻訳する
Amazon.comのカスタマーレビューを見る(11) 5つ星のうち5.0
Amazonプライム会員ならお急ぎ便、日時指定便が使い放題
さらに、映画もTV番組も見放題。200万曲が聴き放題 。クラウドに好きなだけ写真も保存可能。
> プライムを無料で試す