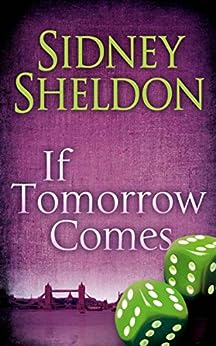 If Tomorrow Comes: The master of the unexpected (English Edition) Kindle版

The late novelist and screenwriter Sidney Sheldon remains one of the world's top bestselling authors, having sold more than 300 million copies of his books. Are You Afraid of the Dark? is his most recent in a long line of huge bestsellers. He is also the only writer to have won an Oscar, a Tony, and an Edgar. The Guinness Book of World Records heralds him as the most translated author in the world.

`A master storyteller at the top of his game.' USA Today `Compulsively readable.' New York Times Book Review `Sidney Sheldon is a master of giving the public what it wants' Los Angeles Times --このテキストは、kindle_edition版に関連付けられています。

tammy
5つ星のうち1.0 This is a very cheap Novel!
2021年5月6日に日本でレビュー済み
Amazonで購入
This is a very easy and bored book. I hate such a cheap book.
I wonder who on the earth loves to buy such a foolish book?
続きを読む
1人のお客様がこれが役に立ったと考えています
役に立った
違反を報告
レビュー を日本語に翻訳する

He writes in plain English and yet has an uncanny knack for drawing people into the story.
続きを読む
役に立った
違反を報告
レビュー を日本語に翻訳する

John
5つ星のうち3.0 Count of Monte Cristo meets Dirty Rotten Scoundrels
2018年10月27日に英国でレビュー済み
Amazonで購入
Having read a few of Sheldon's books in the past, I took a chance on this when it was on offer. The first thing to mention is that having been written in 1985, it has dated a bit in terms of the opening, although this becomes less of an issue later on.

I can't decide what I think to be honest. It is a somewhat odd book - the first third is almost The Count of Monte Cristo in condensed form, with Tracy Whitney replacing the count. A young and beautiful woman she has the world at her feet until she is falsely imprisoned after being framed by a mafia gang and abandoned by her fiancé. Her first days in prison teach her harsh lessons, and she vows revenge, and I think we're set for an interesting story of redemption.
However, this races along and before you know it, the story turns into Dirty Rotten Scoundrels crossed with To Catch a Thief as Tracy turns into a master criminal & confidence trickster which takes here to glamourous locations around the world. At every turn, and ruthless investigator is on her tail - a man who could have saved her from prison who has his own reasons for wanting to catch her.

Overall this isn't bad - it is well written and keeps you interested. However, I was sort of disappointed - I was quite looking forward to a retelling of the Monte Cristo story in the modern (well modernish) world. That part of the story was wrapped up too quickly for me, and the remainder has a bit too much filler for me.
続きを読む
2人のお客様がこれが役に立ったと考えています
違反を報告
レビュー を日本語に翻訳する

Cheshire Tiger
5つ星のうち5.0 Varied and Spicy
2014年12月6日に英国でレビュー済み
Amazonで購入
I read a Sidney Sheldon book some years ago and enjoyed it, so when this came up on Kindle as a bargain offer I decided to buy it. I can see why Mr Sheldon was such a best-selling author. It's a gripping book with various strands and full of excitement. And it keeps you on edge until the very end. In a way it has a touch of Riley the Ace of Spies: one scarcely related, exciting incident after another. And another parallel is The Sting.

The events are on occasion harrowing and on others are perhaps a bit far fetched. Sometimes (pelota in the Basque country, flamenco and Majorcan caves) you feel you might be reading an interesting travel guide, though on at least one occasion it errs a bit. The ancient churches of the Netherlands date back to mediaeval rather than "pagan days". And the "picturesque (coastal) village" of Alkmaar is an inland city of 95,000 people (with a well known football team). On the other hand we are spared explicit sex scenes and schmaltz, except briefly towards the end.

All in all this is a very good read. I found it hard to put down.
続きを読む
5人のお客様がこれが役に立ったと考えています
違反を報告
レビュー を日本語に翻訳する

Kindle Customer
5つ星のうち5.0 Fab!
2020年4月6日に英国でレビュー済み
Amazonで購入
I actually read this about 30 years ago and loved it! So decided to read it again. Being.as it.was such a long.time I couldn't quite remember it and therefore it was a delight to relive it.again. As with most of his novels, the woman is the dominant character and with Tracy Whitney he made no exception! She grows from a naive young woman to become.someone formidable. A great read and am now contemplating the sequel! if only to find out what happens next for her and.Jeff.
続きを読む
違反を報告
レビュー を日本語に翻訳する

B. Bampton
5つ星のうち3.0 It's a good idea but not well developed.
2015年5月24日に英国でレビュー済み
Amazonで購入
I think you're supposed to see the leading female character as a victim but in my view she's a cross between a lunatic and a gold digger. (Would you try and threaten a mobster?) After being convicted of a crime she didn't commit (as opposed to the one she did) she gets in with the right people on the inside - we never know why or how - and gets out of jail free. Once out she is directed by her prison protector to a really cunning con man but she outwits him. Next thing you know she's an international art/ jewel/ whatever you want nicking thief. The author goes to some lengths to describe the places she travels to but gives no clue as to how she commits most of her crimes, which is frustrating. As a result, from the time she gets out of prison to the time she hooks up with Jeff, it's very dull. I'd give the ending 4 stars for excitement but I'd have liked a different ending.
続きを読む
2人のお客様がこれが役に立ったと考えています
違反を報告
レビュー を日本語に翻訳する

Pascale F. M.
5つ星のうち5.0 Modern day girl Robin Hood
2012年8月13日に英国でレビュー済み
Amazonで購入
I read this book about 15 years ago and I remember I thoroughly enjoyed it for the strength of the heroine . The other day, I was browsing Kindle shop and was agreeably surprised to find it in Kindle form and I knew I had to re-read it. The magic of Sidney Sheldon's story telling was still there, but being older and wiser (I hope), I did find it a little over the top. Of course, I still believe that, no matter what life throws at you, you can bounce back, and Tracey, the main character is a proof of that. Basically, the story is that of young woman whose perfect life is turned upside down when she makes the mistake of confronting alone the ruthless man who is the cause of her mother's suicide. Framed for a crime she did not commit, she is sent to a women's prison where she experiences gang rape on the first night and solitary detention. Coming back from the brink of despair, she earns the respect of her cellmates. But one of the inmate is a terrible threat to her but eventually she is released because she does an heroic act on the day she was going to escape (which prevents her from being caught). Once in the outside, she realises there is not going back to her old life and eventually, arrives on the doorstep of a highly double crosser con artist jeweller. But Tracey is not the innocent little girl anymore. She manages to outwit the double crosser, and from then on, there is no turning back. With the help of her British mentor, she become a kind of financial avenger, stealing from the unscrupulous riches (never from the 'normal' rich). She is very successful but lonely. And someone is hot on her trail. She becomes his obsession. He haunts her every step. Will she be caught?
You have to read the book to find out.
I marked If Tomorrow Comes 5 stars. Because the quality of the story is the same as 15 years ago. It is only me who has changed. Which will not prevent me from checking more Kindle titles from the well missed Sidney Sheldon. I have read most of them in paperbacks long time ago and it is time for a re-read.