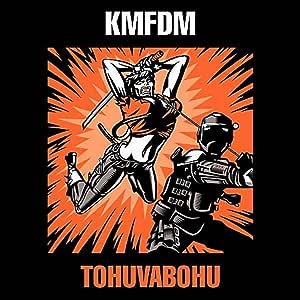 Tohuvabohu starts with a boisterous, tongue-in-cheek hymn to the power of KMFDM, replete with phone messages from fans extolling the band's virtues, and then tries to live up to it over the course of 51 head-slamming minutes. Longtime fans will immediately recognize the mix of aggressive storm-trooper grooves with lacerating scrawls of electronic noise multiplied across sequencer patterns and Steve White's distorted slabs of guitar. Sascha Koneitzko remains the frontman for the group, shouting his lyrics in that Skinny Puppy yowl from hell. Lucia Cifarelli, on the other hand, exults in a dominatrix vocal style. Her tunes sometimes make KMFDM sound like they want to be Shirley Manson and Garbage--and "Looking for Strange" and "Fait Accompli" almost succeed--but they just can't commit to the hook or a vocal approach that isn't shouting in your face. They take lyrical cliché to extremes on the title track and "Headcase," altering stock phrases like "Ask no questions, hear no lies" as cartoon political sloganeering. In Hebrew, "tohu va bohu" means "formless and empty," referring to the world before creation (Genesis 1:2). But KMFDM is all about form and structure and the idolatry of the beat. If nothing else, Tohuvabohu shows KMFDM's continued commitment, after nearly a quarter century, to their mutant marriage of heavy dance beats for metalheads. --John Diliberto

KMFDM, now in their 23rd year, remain a musical entity to be reckoned with. Through relentless experimentation and reinvention they have continued to unleash a barrage of songs that allow their fans to dance with abandon, bang their heads or dissect the band's cuttingly cunning lyrics sometimes all at once! KMFDM's new album on Metropolis Records, Tohuvabohu, is no exception. `Tohuvabohu,' an Old Testament word meaning wild and chaotic, perfectly captures the spirit and energy behind the tracks contained therein. Sascha Konietzko, the band's founder and leader, conducts his army of analog synths and wields his razor sharp lyrics and vocals. Chanteuse Lucia infuses her tracks with a fiercely powered urgency alternating with soft beauty. The KMFDM core remains solid as ever with Jules Hodgson, Andy Selway and Steve White providing the cranking guitars and forceful beats that KMFDM is known for.

Super_K
5つ星のうち5.0 Tohuvabohu doesn't disappoint!!!
2015年8月24日にアメリカ合衆国でレビュー済み
Amazonで購入
Ok, so yes, KMFDM does have nearly 20 albums out there, and yes, their music is somewhat formulaic, but if you like The Ultra Heavy Beat, this album certainly doesn't disappoint, and comes very close to the quality of their work at their height of popularity in the 90s.

Here is a rundown of the songs and what they are like:

1.) Superpower. KMFDM likes to have songs on their albums where the parody themselves, and just sing about how awesome they are. They do that in this song, and it's funny to hear the over the top statements that they've made for themselves, and to just celebrate the band.
2.) Looking for Strange. Lucia's sexy, sensual vocals are an important part of KMFDM. They are well featured here.
3.) Tohuvabohu. KMFDM likes to sing on other languages sometimes. Here they bring some Latin to the table!! Also, I love how they sing "After us the deluge!" and drag out the word "deluge" extra long...
4.) I Am What I Am. More of Lucia's sexy alto voice.
5.) Soft und Kraft. A fast frenzy. Lyrics are in German.
6.) Headcase. More Lucia vocals. One of the strongest songs on this album.
7.) Los Ninos del Parque. Spanish vocals!! Also one of the strongest songs on this album. Machismo-like vocals that are unique for KMFDM.
8.) Not in My Name. Another good Lucia song.
9.) Spit or Swallow. Good Kaptain K vocals.
10.) Fait Accompli. Lucia and Kaptain K sing together in harmony. Not everyone gets to sing Industrial Metal vocals with their hot wife, so I envy Kaptain K very much in listening to this song.
11.) Bumaye. Also a lot of sexy Lucia vocals with different types of vocal distortion. Some dramatic confessional-like spoken word and yelling in German by Lucia.

So in summary, if you like KMFDM, this album won't disappoint you, and you should buy it to fill out your KMFDM library. If you are new to KMFDM and want to try out some of their music for the first time, go head and preview this album before you buy it, and also check out the albums that are more famous from the 90s, like Angst, Xtort, Symbols, Nihil, or Money before you make a final decision.

Finally, this wouldn't be a KMFM review without the following statement: