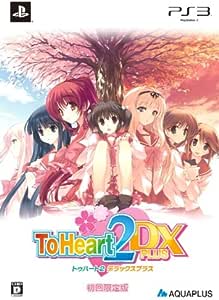 If you happen to stumble on to this game, congratulations! You're not alone! To Heart 2 is a romance "novel-type adventure game" in which the player assumes the role of Takaaki Kouno, who begins his second year of high school after reuniting with a childhood friend. Much of the game-play is spent on reading the story's narrative and dialogue. To Heart 2 follows a branching plot line with multiple endings, and depending on the decisions that the player makes during the game, the plot will progress in a specific direction.The game divides each school day of the story-line into four segments. These segments illustrate the events that occur during Takaaki's commute to school, during school, after school, and after he returns home at the end of each day. Depending on the time of the day and the player's actions, he or she may be presented one of three types of events: mandatory events, which occur automatically during certain points in the game's plot line; temporary events, which occur during certain periods of time only if specific conditions are met; or after school events, which occur at the end of each school day. At the end of each school day, the player will be given the option to navigate to various locations within the game's setting. Each choose-able location is accompanied by an image of a heroine in order to allow the choices to be easier to make. Throughout game-play, the player is given multiple options to choose from. Text progression pauses at these points, and depending on the choices that the player makes, the affection rate of the heroine associated with the event will either increase, decrease, or remain the same. To Hearts 2 DX Plus is a compilation of To Heart 2 and its spin-off To Heart 2 Another Days. It contains new computer graphic illustrations, additional and rewritten scenarios, including a new heroine named Mio Hanesaki, and Motion Portrait graphics rendering. The limited edition release contains a 300-page A4-sized art book named To Heart 2 Perfect Visual Collection, a four-disc soundtrack titled To Heart 2 Complete Soundtrack, and the game itself.

Novel type adventure game on how to get the girl (aka. WAIFU)
300-page A4-sized art book that you won't regret
Four-disc soundtrack, orgasm for you ears
Girls, girls, girls, and more girls... What's not to hate about this?
続きを読む