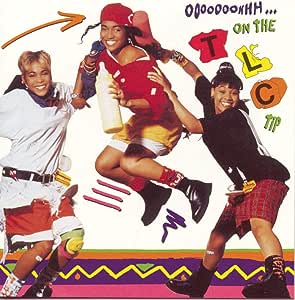 On the Tlc Tip インポート

A hip-hop album with major pop crossover appeal, TLC's 1992 debut was an instant success. The trio of young women--T-Boz, Chilli, and Left Eye--projected a playful and colorful image, wearing bright, floppy clothes and using prophylactics as fashion accessories (Left Eye used to wear a colored condom as an eye patch, hence the nickname). The music was equally vibrant, trading off Left Eye's sandy raps, T-Boz's low-register come-hither croon, and Chilli's sultry R&B vocal melodies, creating an infectious, high-energy buzz. With singles like "Baby-Baby-Baby," "What About Your Friends," and the party-anthem shout-out "Ain't 2 Proud 2 Beg," the group approached subjects like sex and friendship with a youthful, inexplicit innocence. --Beth Bessmer

Writer
5つ星のうち5.0 good cd
2016年12月9日にカナダでレビュー済み
Amazonで購入
I honestly find this cd to be my favourite of the group. I really like all the songs and how their lyrics were with the time's; Sex positive for women and safety pushing for everyone, plus some truth telling about societies standards. It makes me happy how their voices all blended together too for such a new group at the time.
Plus the seller i bought from, sold me an amazing well taken care of used CD. You can tell it's old, but that the person who had it really liked it enough to keep the case so clean and uncracked.
続きを読む
役に立った
フィードバックを送信中...
フィードバックをお寄せいただきありがとうございます。
申し訳ありませんが、お客様の投票の記録に失敗しました。もう一度試してください。
違反を報告
レビュー を日本語に翻訳する

Shelldbow
5つ星のうち5.0 Amazing debut full of life
2013年4月15日にアメリカ合衆国でレビュー済み
Amazonで購入
On the groups first album here, TLC is exploding with energy and has an attitude (with a lot of positive messages). Even though this was released in 1992 and you can hear the early 90's tinge occasionally, this is still up there with the albums that came after it.

When you listen to this straight through the first time, there's one thing that's very obvious: this is probably the most hip-hop influenced TLC album. It sounds and feels like Lisa "Left-Eye" Lopes is the driving force behind most of the songs but it never sounds like T-Boz or Chille are back-up singers. Left Eye is an amazing rapper; the way she switches her flow or style at the drop of a hat feels extremely natural and incredible. T-Boz brings an edge to her singing that almost borderlines on a hybrid of rap and melodic delivery. Chille shows her range and sounds wonderful. All of them harmonize beautifully together.

Again, I would definitely say that Left Eye was the heart of this album and on future albums it seemed like her role in the group continually started to diminish on each album after the next (not saying "Crazysexycool" or "Fanmail" aren't classics). The lyrics have a very positive message in them whether it be 'it's ok to be an individual', 'practice safe sex', 'women deserve respect', or just universal situations that we can all relate to.

For any TLC fan, snatch this up because it belongs in your collection.

For people new to TLC, listen to songs like "What about Your Friends" or "Ain't 2 Proud to Beg" and see if you like the more hip-hop flavored sound of this album.

I personally think that any fan of hip hop and/or R&B should at least listen to the song samples to give it a try.

The Fancy One
5つ星のうち4.0 Where it all began
2007年6月5日にアメリカ合衆国でレビュー済み
Amazonで購入
Imagine the early '90s R&B group Bell Biv Devoe as a girl group - and TLC is what you get. Little did we know we had legends in the making!! They had a unique look and style, and they weren't like ANYONE else out there - and this is why people are STILL talking about this group. We will never forget the almost cartoonish Day-Glo clothes that were baggy as all get out, and condoms worn as the "must-have" fashion accessory.

Although CRAZYSEXYCOOL is probably TLC's best selling and most popular disc, OOOOOOOHHH...ON THE TLC TIP, the Atlanta group's debut, is my favorite by the trio. Primarily produced by Dallas Austin, Jermaine Dupri, L.A. Reid and Babyface, this is one of the few CDs that features samples throughout it that I really love. While all the ladies contribute their now trademark sounds, it is the late Lisa "Left Eye" Lopes who dominates the material here. I still listen to it at least once everyday. I first purchased it on cassette and wore it out so badly, I had to get another one and the same thing happened. Finally I just got the CD and I still have it today. I can honestly say that this was the CD that changed my life when I first brought it in '92. TLC might have taken a page from Salt 'n Pepa by talking about female empowerment, safe sex, loyalty, black-on-black crime, double standards and true friendship - issues that touched me in a huge way back then (and still do today, to a degree) but they took it to an even higher level. This is GIRL POWER in its finest form. The message on it gave me the confidence and courage to face the dilemmas in my life instead of running away from them, to rely on myself, and I haven't looked back since! This is why these girls mean so much to me, and why I've supported them from day one.

OOOOOOOHHH....ON THE TLC TIP grabs you right from the start - yes, even the intro makes you interested in what you are about to hear. (And yes, the interludes between the songs will crack you up, too.) Exploding with the sounds of New Jack Swing, funk, rap, hip-hop, catchy pop hooks, and crazy, frenetic Public Enemy-like samples all over it, this CD is an instant injection of fun and youthful energy. The material sounds just as good now as it did back in the day. It kicks off with the Grammy-nominated hit "Ain't 2 Proud 2 Beg", goes right into the red-hot "Shock Dat Monkey" and keeps the momentum going with "Hat 2 Da Back". The CD sort of hits a bump with "Das The Way We Like 'Em" - all I can say is I prefer that Left Eye do the rapping, and let T-Boz and Chilli stick to singing. However, it picks right up again with the hit "What About Your Friends" and "His Story", an amazing song that showed that TLC had a serious side to them as well. This tune caused a bit of controversy back then because Left Eye mentioned the name of a prominent rape victim in the intro. (For those who don't know, this was a huge story in the late 1980s in New York and the news spread nationwide. The teenage girl, who was black, accused six white men, some of them police officers in Duchess County, NY of kidnapping and raping her but when it came down to it, she was accused of lying about the attack. She continued to stand by her story. It's been said that the song "His Story" is loosely based on that event.) What I loved so much about this group is they almost always had important messages in their songs, subjects we all need to pay attention to - as we see with their later smashes, "Waterfalls" and "Unpretty".

The CD keeps up the pace with the hyped-up girl-power anthem "Bad By Myself", and segues into the smoother ballads "Something You Wanna Know" and the # 1 R&B hit, "Baby-Baby-Baby". Another misstep here is "This Is How It Should Be Done" - don't really like this much even though it does feature Left Eye. But a perfect closer to this is MY personal anthem - "Depend On Myself", words I truly live by and take to heart. Ladies, if you ever need a dose of confidence and something to lift your spirits, this is the CD to listen to! Energetic, lively and positive, if you are a TLC fan then there is no reason for you NOT to own this. Put it on, dance and have a good time - I know Lisa would want it that way.
続きを読む
6人のお客様がこれが役に立ったと考えています
役に立った
フィードバックを送信中...
フィードバックをお寄せいただきありがとうございます。
申し訳ありませんが、お客様の投票の記録に失敗しました。もう一度試してください。
違反を報告
レビュー を日本語に翻訳する

L. Greer
5つ星のうち5.0 Great Price
2016年7月20日にアメリカ合衆国でレビュー済み
Amazonで購入
This just took me back to the 90's and reminded me of how much I love TLC and their music. It was fun introducing my favorite songs to my grand daughter. I know many people have digital media...I mean I do as well but I don't have it on my phone nor do I have my computer in my room so this CD was a logical choice for me. I blew the dust off my CD player and I have been enjoying myself in my room listening to music like I use too.
続きを読む
役に立った
フィードバックを送信中...
フィードバックをお寄せいただきありがとうございます。
申し訳ありませんが、お客様の投票の記録に失敗しました。もう一度試してください。
違反を報告
レビュー を日本語に翻訳する
その他の国際レビューを読み込む

Brittanie Sidebottom
5つ星のうち5.0 I love this CD
2016年3月8日にアメリカ合衆国でレビュー済み
Amazonで購入
I love this CD!!! Been a long time TLC fan for years, so owning this cd (and all of their others) is a must for me!! They sound so dope on them all!! Can't wait for them to release new music this summer!! Rip Left Eye, we all love and miss you dearly!!
続きを読む
役に立った
フィードバックを送信中...
フィードバックをお寄せいただきありがとうございます。
申し訳ありませんが、お客様の投票の記録に失敗しました。もう一度試してください。
違反を報告
レビュー を日本語に翻訳する