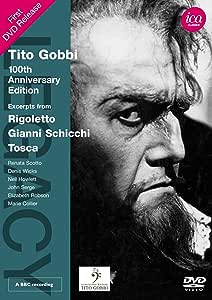 George Thanos Assimakis
5つ星のうち5.0 An excellent documment
2014年3月3日 - (Amazon.com)
Amazonで購入
This is indeed a must for all Tito Gobbi fans. There is little point describing him, he was simply excellent in most of the roles he played. The transfers for this disc are very good. The black and white image is probably the best I have seen portraying this singer and the sound quality is also very good.
My only reservations lie with the choice of material. It is rather disjointed. There are bits from Rigoletto, where he gives an excellent performance both as a actor and as a singer. The supporting cast is not first rate. In Gianni Schicchi he is his usual best. The supporting cast here is much better. It is a pity that the bulk of the inheritance scene is missing, but fortunately it exists on another EMI DVD called Great Opera Singers. His portrayal of Scarpia in Tosca is as expected excellent.
It is a great pity that Act II of Tosca with Tito Gobbi and Maria Callas has not been remastered, as these recordings have. Both Callas and Gobbi give unsurpassable performances and Gobbi himself is much better than on the present disc. I just hope that some opera loving DVD producer will provide us with this. The same is true of a complete Rigoletto that exists on Video with Gobbi, conducted by Toulio Serafin, that never appeared on DVD.
I was fortunate to have seen Tito Gobbi in a number of roles at Covent Garden in my youth. Of all the roles I saw him, at least to me, the most striking was Simon Boccanegra. It is a pity that nothing visual has been produced with Gobbi in what I feel was his most famous role.

Thomas Tyrrell
5つ星のうち5.0 Not to be missed!
2018年2月21日 - (Amazon.com)
Amazonで購入
If you know Gobbi, you probably have it. If you don't, you need to get it!
続きを読む
レビュー を日本語に翻訳する