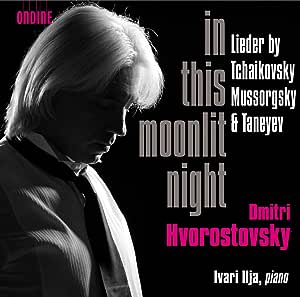 maria zentai
5つ星のうち5.0 Superb
2013年2月20日にアメリカ合衆国でレビュー済み
Amazonで購入
An outstanding album in every respect. The program is carefully chosen. Differently from Hvorostovsky's recent song-albums this one builds on two closely-knit cycles: Tchaikovsky's Six Romances and Mussorgsky's Songs and Dances of Death. The third block contains six songs by Taneyev but these, too, touch the dominant themes of the cycles: love and death. Hvorostovsky's voice is in perfect shape, it is as fresh as new, flies up to the high regions with ease, its unique timbre , its shining darkness is as if the voice was the embodiment of the title. His characteristic deep emotionality comes through best in the Tchaikovsky songs, and his signature song 'Again, as before, alone' gets new dimensions as the closing piece of the cycle which carries the listener from regret and loss (You and I were sitting together) through dreaming and desire (In this moonlit night) to hymnic heights of love (The sun has set) , then back to loneliness and unutterable anguish again in the last song. Then a bit longer pause - and the ultimate surprise comes. The Mussorgsky cycle is performed usually with orchestration (Hvorostovsky himself made earlier records of it with Gergiev and with Temirkanov) so the turnback to the piano-version was a bit risky, to put it mildly. But the result convinces that this is the right form! Much-much more intense than even the best orchestral version. Ivari Ilja's congenial piano playing sets the scene perfectly for each song, and what Hvorostovsky does is more than fantastic singing. His voice changes with the characters, he creates dramatic scenes so different in the four songs but equally chilling the blood in an omnipresent danse macabre. His singing Death is tender and amorous, sarcastic and triumphant. At the end of Serenade one feels almost embarrased by the intimacy of his loving whisper: '...slushay...molchi...' . In Trepak the ghostly passages of the blizzard run and howl under the fingers of Ilja, Hvorostovsky's voice turns deadly playful, Death amuses himself ...The Taneyev songs seem to be of a lighter character, the magic voice is filled with warmth now and evokes fairy tales (Winter path) and tender love. But in Menuet the foreboding of death appears again. I've listened to the album many times, first from the beginning to the end ,then separately to the three blocks, then to each song, again and again. It always gives new pleasures to the ear and to the soul.
Please, note the cover, too - a really artistic portrait (the work of Pavel Antonov).
I warmly recommend the album to everybody who loves beautiful deep voices and who loves art songs.