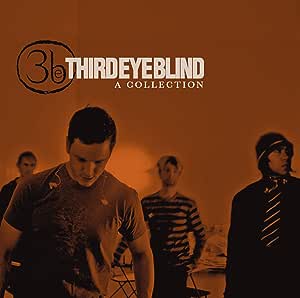 7. Deep Inside Of You

Caleb
5つ星のうち5.0 All songs are great!
2019年2月8日にアメリカ合衆国でレビュー済み
Amazonで購入
I’ve always loved their mainstream songs, but this CD truly made me appreciate their lesser known songs. You can tell it’s all by Third Eye Blind, but each song has different rythems and beats which makes the ability to enjoy the CD last very long without it being repetitive.
続きを読む
2人のお客様がこれが役に立ったと考えています
役に立った
フィードバックを送信中...
フィードバックをお寄せいただきありがとうございます。
申し訳ありませんが、お客様の投票の記録に失敗しました。もう一度試してください。
違反を報告
レビュー を日本語に翻訳する

guillermoj
5つ星のうち4.0 A great collection for those who only bought their 1st release
2006年8月18日にアメリカ合衆国でレビュー済み
Amazonで購入
No one said that life was fair, but this band had the misfortune of exploding into the charts with their debut release and then suffered the back-slap of expectations that come from immediate success. Their second and third releases received good reviews from the critics, but it seems that only the band's hard-core fans bought them. Expectations were so high for this band by the powers that be (music executives) that they were actually dropped by their label. Absolutely crazy but Jenkins should have no trouble finding a home when he's ready to release something.

I am generally weary of releases that on the surface seem like final attempts to cash in on a band, but this one has most of the songs. Also, the inserts are informative with Jenkins giving the listener a little behind the scenes look at the origin of the songs. Nothing worth spending your money if you have their 3 releases, but a nice touch as these days inserts, esp. collections, don't do much except praise the artist in a one pager by a critic or fan of the band.

The Cd clocks in at 80 minutes so the selection is generous. The songs that you know are out there and some that I did not know or did not catch my attention before were nice surprises ("Tattoo of the Sun" and the intimate "God of Wine") so this pruchase was a no brainer for me.

Irrelevant Sidebar: I actually went to school with Steve J. since middle school, and he was always introducing people to new bands and the better bands of the time. He was serious about his music and is certainly not a creation of some producer. Best of luck and note that this review is based on the release itself. Don't hate him because he dated Charlize Theron! This release earns 4 stars. I;d probably give it 5 if there weere some songs that were accoustic, but that is neither here or there.

O. Albretsen
5つ星のうち5.0 Wasn't sure what I'd get. Ended up being blown away!
2016年4月4日にアメリカ合衆国でレビュー済み
Amazonで購入
Hadn't listened to 3EB in ten years or so, so I only remembered "Semi-Charmed Life." Finding out the band has some GREAT songs other than that one. The ones from "Out of the vein" aren't quite as catchy, but still solid. VERY happy with this comp.
続きを読む
2人のお客様がこれが役に立ったと考えています
役に立った
フィードバックを送信中...
フィードバックをお寄せいただきありがとうございます。
申し訳ありませんが、お客様の投票の記録に失敗しました。もう一度試してください。
違反を報告
レビュー を日本語に翻訳する

Glenda
5つ星のうち5.0 Product is great
2015年12月19日にアメリカ合衆国でレビュー済み
Amazonで購入
Product is great band is awesome but would suggest purchasing elsewhere as the shipping was terrible. I mean worse than bad. And the way it was handled was even worse. I was left praying that this CD an five others would just make it to me as my money had already been taken for them. Just terrible man that's all I can say.
続きを読む
1人のお客様がこれが役に立ったと考えています
役に立った
フィードバックを送信中...
フィードバックをお寄せいただきありがとうございます。
申し訳ありませんが、お客様の投票の記録に失敗しました。もう一度試してください。
違反を報告
レビュー を日本語に翻訳する