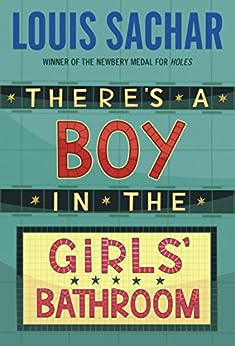 There's a Boy in the Girls' Bathroom (English Edition) Kindle版

"A humorous and immensely appealing story...Readers are likely to come away with the sense that they've been rooting for themselves too"--"Kirkus,"

" A humorous and immensely appealing story...Readers are likely to come away with the sense that they've been rooting for themselves too" --"Kirkus," --このテキストは、kindle_edition版に関連付けられています。

Bradley Chalkers sat at his desk in the back of the room-last seat, last row. No one sat at the desk next to him or at the one in front of him. He was an island.
If he could have, he would have sat in the closet. Then he could shut the door so he wouldn’t have to listen to Mrs. Ebbel. He didn’t think she’d mind. She’d probably like it better that way too. So would the rest of the class. All in all, he thought everyone would be much happier if he sat in the closet, but unfortunately, his desk didn’t fit.
“Class,” said Mrs. Ebbel. “ I would like you all to meet Jeff Fishkin. Jeff has just moved here from Washington, D.C., which as you know, is our nation’s capital.”
Bradley looked up at the new kid who was standing at the front of the room next to Mrs/ Ebbel.
“Why don’t you tell the class a little bit about yourself, Jeff,” urged Mrs. Ebbel.
The new kid shrugged.
“There’s no reason to be shy,” said Mrs. Ebbel.
The new kid mumbled something, but Bradley couldn’t hear what it was.
“Have you ever been to the White House, Jeff? Mrs. Ebbel asked. “I’m sure the class would be very interested to hear about that.”
“No, I’ve never been there,” the new kid said very quickly as he shook his head.
Mrs. Ebbel smiled at him. “Well, I guess we’d better find you a place to sit.” She looked around the room. “Hmm, I don’t see anyplace except, I suppose you can sit there, at the back.”
“No, not next to Bradley!” a girl in the front row exclaimed.
“At least its better than in front of Bradley,” said the boy next to her.
Mrs. Ebbel frowned. She turned to Jeff. “I’m sorry, but there are no other empty desks.”
“I don’t mind where I sit,” Jeff mumbled.
“Well, nobody likes sitting…there,” said Mrs. Ebbel.
“That’s right,” Bradley spoke up. “Nobody likes sitting next to me!” He smiled a strange smile. He stretched his mouth so wide, it was hard to tell whether it was a smile or a frown.
He stared at Jeff with bulging eyes as Jeff awkwardly sat down next to him. Jeff smiled back at him so he looked away.
As Mrs. Ebbel began the lesson, Bradley took out a pencil and a piece of paper, and scribbled. He scribbled most of the morning, sometimes on the paper and sometimes on his desk. Sometimes he scribbled so hard his pencil point broke. Every time that happened he laughed. Then he’d tape the broken point to one of the gobs of junk in his desk, sharpen his pencil and scribble again.
His desk was full of little wads of torn paper, pencil points, chewed erasers, and other unrecognizable stuff, all taped together.
Mrs. Ebbel handed back a language test. “Most of you did very well,” she said. “I was very pleased. There were fourteen A’s and the rest B’s. Of course there was one F, but…” She shrugged her shoulders.
Bradley held up his test for everyone to see and smiled that same distorted smile.
As Mrs. Ebbel went over the correct answers with the class, Bradley took out his pair of scissors and very carefully cut his test paper into tiny squares.
When the bell rang of recess, he put on his red jacket and walked outside, alone.
“Hey, Bradley, wait up!” somebody called after him.
Startled, he turned around.
Jeff, the new kid, hurried alongside him. “Hi,” said Jeff.
Bradley started at him in amazement.
Jeff smiled. “ I don’t mind sitting next to you,” he said. “Really.”
Bradley didn’t know what to say.
“I have been to the White House,” Jeff admitted. “If you want, I’ll tell you about it.”
Bradley thought a moment, then said, “Give me a dollar or I’ll spit on you.” --このテキストは、kindle_edition版に関連付けられています。

Zulu Warrior
5つ星のうち4.0 Not Bad
2020年10月7日に英国でレビュー済み
Amazonで購入
Bradley Chalkers was told a new boy Jeff Fishkin was to sit next to him, Bradley had been held back a year and was the oldest and biggest in class, he was rude to Jeff from the start, Bradley told lies after lies to his class mates and his teachers, he gave Jeff a dollar and said he was his friend now, Bradley had never had a friend

Bradley was to see a councilor, at first he refused but eventually agreed, he was extremely rude to her, Jeff also saw the councilor to help him settle into school, Bradley was rude to some girls but they beat him up, he said it was Jeff, Jeff had to go to the head and explain, there is to be a Birthday party Jeff was invited but bradley was not

Bradley hated his life and comes to the decision to be nice to everybody, he is desperate for people to like him but has he gone to far

ChrisE
5つ星のうち5.0 A lovely book
2021年2月12日に英国でレビュー済み
Amazonで購入
Despite an unpromising first chapter, this turned out to be a lovely, life-affirming book, in spite of me being nearly 60 years older that the target audience. I would also recommend his Holes (a great book, and nearly as good a film); and, as a bridge player, I also loved The card turner, though that might be a for a more restricted readership.
続きを読む
3人のお客様がこれが役に立ったと考えています
違反を報告
レビュー を日本語に翻訳する

Abi M.
5つ星のうち5.0 Great story
2020年1月25日に英国でレビュー済み
Amazonで購入
This book is all about an unruly boy and how he learns to make friends and beleive in himself. I really enjoyed this book and would recommend it to both adults and children over 8. This book drew me into the story and at same points I could feel how the character felt at that time. Another great feature if this book is how it compared to an imaginary life of Bradley's toys and how they feel when their excluded or happy. I loved reading this book
続きを読む
6人のお客様がこれが役に立ったと考えています
違反を報告
レビュー を日本語に翻訳する

Manickam
5つ星のうち5.0 Funny and realistic
2014年12月31日に英国でレビュー済み
Amazonで購入
Sachar has done it perfectly. His books are, all the time, insightful, quirky, and hilarious. The book circles around Bradley Chalkers, who has what we would call 'problems' and learning disabilities. He is unhappy and troubled, and likes no one.
But soon a new kid, Jeff Fishkin, joins the school. He sits next to Bradley, and he likes him, or at least he says he does. But this is a small part of the book, yet important.
Carla Davis is the pretty young counselor. She has watery blue eyes and blonde hair. Bradley Chalkers has too see her. Soon the unlikely pair form a bond. Bradley Chalkers sees her in her office whenever now, and his school life slowly improves. He stops tearing books, makes friends.
But Carla has to leave, and while Bradley is sad, she has done lasting good.
I really liked this book. It was funny and I had my head stick in it. While the ending was sad and I felt like I was Bradley Chalkers, saying bye to Carla Davis, I was pleased with the outcome and wished all the characters the best.
It's not a hard book to read, but due to the context (nothing horrible) I would recommend to nine years and older. Maybe the oldest you should be is fourteen-year-old. The chapters are quick so one to two chapters are good for quick reading in minutes.
I loved it! A must by for all kids.

C. C.
5つ星のうち5.0 My 9 years old boy who reads a lot, made me read this book because it was soooo good!!
2021年10月19日に英国でレビュー済み
Amazonで購入
New boy Jeff was to sit next to Bradley who was rude and mean. Bradley told lies to excuse his lack of responsibility and did badly at school in purpose.
Bradley was to see a councilor or else! He was really rude to her. Jeff also saw the councilor to help him settle into school. Jeff goes in the girls bathroom by accident and feels mortified! Bradley said he does that all the time just to bother the girls so they become friends. Bradley was afraid as he had no other friends.
A girl beat Bradley up, people thought it had been Jeff so Jeff became some sort of celebrity at school and made lots of friends.
Bradley hated his life, his family and school. But then he tries to be nice and do his school work to be noticed, it backfired at first but things turned...