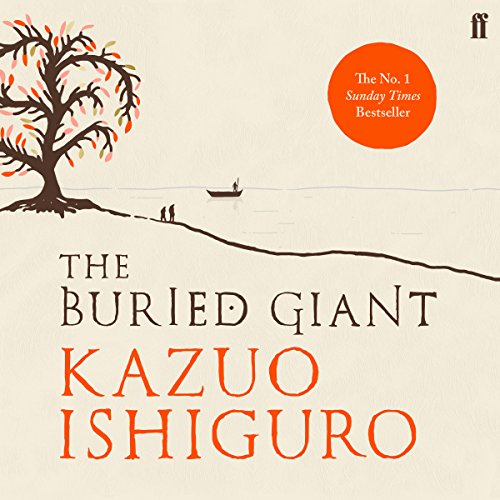 jun42
5つ星のうち4.0 Forget or not
2018年3月5日に日本でレビュー済み
Amazonで購入
I watched the author's lecture on TV. In his lecture he explained the theme of this novel is forgetting. After watching the TV program I read this novel. I understand the theme of this novel is to forget something unpleasant for an old couple. Forgetting is an interesting theme of a novel.
Battles between Saxons and Britons in the novel remind me of the second world war.
More than 70 years passed after the end of the World War II, but some issues are often discussed between Japan and neighboring countries such as China and Korea. It seems that some issues of war times will never be forgotten.
続きを読む
4人のお客様がこれが役に立ったと考えています
役に立った
違反を報告

Mr. John Reed
5つ星のうち3.0 Well I finished it
2017年11月16日に英国でレビュー済み
Amazonで購入
I loved ‘Never let me go’. Maybe that’s because I read books as they are. I don’t look for allegories , deeper meanings or anything much beyond the writing. So I embarked on this novel. And it was hard work. The style was stilted and formal. Everyone spoke much the same so you had to ensure which character was talking. The format is very episodic, except each episode doesn’t necessarily start at the beginning so you have to hang on a few pages to find out where the character/ animal/ etc came from.
So I actually found it very difficult if not impossible to engage with the players. I say players because elements of it reminded me of those old computer games called something like ‘adventure quest’ , where you had to ask the right questions to get the right answers. Only it took the whole book for them to ask the right questions.
At the end I found myself admiring the quality of the writing, the construction of the plot but totally missing what the purpose of the book was. I was astonished by the rave reviews and wondered if there was another version of the book I had not been allowed to read.
続きを読む
72人のお客様がこれが役に立ったと考えています
違反を報告
レビュー を日本語に翻訳する

Lisa Busby
5つ星のうち2.0 What was that all about?
2018年2月11日に英国でレビュー済み
Amazonで購入
At first I was totally drawn into this story. I loved the way it was written, as if I was reading an old text in a children's library. I loved the intrigue of the characters and the journey they were going to undertake. I liked the mystery surrounding the boy and the soldier who had mighty strength and I couldn't put it down. Then I started to get a bit bored.

Did I understand it? Was I missing something that other people could see? I don't know, I just know that I put it down for several days and when I did pick it up it was with a sigh and wondering what was going on outside my window.

I did persevere, however, and when I reached the end, waiting for the lights to switch on and make it all worth it, I gave my biggest sigh and returned to the window. An anti-climax to say the least.
Even the dragon didn't feature in the way I had hoped. So would I recommend this book? Probably not but maybe I just didn't get it.
続きを読む
35人のお客様がこれが役に立ったと考えています
違反を報告
レビュー を日本語に翻訳する

Leitir
5つ星のうち5.0 An intriguing tale of love, identity, ethnicity and magic
2017年12月4日に英国でレビュー済み
Amazonで購入
I read this book straight through in just under a day. It is a tale that grabs your heart in a subtle yet firm way - and takes you on a journey with a small number of companions who each have a different connection with history and memory and identity. A strange mist hangs over this tale that gives you every increasing glimpses of the giants that lied buried beneath. There is an allegorical depth to this tale that will take some time for me to more fully understand and appreciate it. It is a tale that touches on what it means to love - in spite of hurt and pain. Of how people try and deal with grief both personal and tribal. It has clear echoes of resonance with what is happening today. How do we choose to remember and celebrate? What do we choose to remember and celebrate? And why? And when all is said and done and commemorated, what do we do then? Where do we go? This novel gives much for the soul and heart to ponder. Thank you.
続きを読む
32人のお客様がこれが役に立ったと考えています
違反を報告
レビュー を日本語に翻訳する

Keith Crawford
5つ星のうち5.0 A magnificent portrayal of married love
2019年12月30日に英国でレビュー済み
Amazonで購入
Axl and Beatrice are searching a land covered in a memory-stifling mist for a son they have lost some years ago. On the way there will be knights and monks, trials and tribulations, and creatures of legend until they finally have to face the truth about themselves.
It is quite extraordinary that a significant number of readers and critics have rejected this book on the basis that it is a fantasy novel – fairly low Arthurian fantasy at that. How can you be snobby about Kazuo Ishiguro? The man is a genius!
Still, it is there loss, because The Buried Giant is both brilliantly written literary fiction and one hell of a story. This is one of the best portrayals of married love that I have ever read, and the central characters are utterly convincing. And, of course, this is Ishiguro, and nobody does heartbreak better than he.
This book takes you on an extraordinary adventure then brings you to somewhere you never expected but always should have. The end of the book kept me thinking for days and is deeply touching. You owe it to yourself to read this masterpiece.
続きを読む
15人のお客様がこれが役に立ったと考えています
違反を報告
レビュー を日本語に翻訳する

Martin
5つ星のうち3.0 Weighted down by the past
2016年7月27日に英国でレビュー済み
Amazonで購入
I read 'The Buried Giant' and thought it almost a brilliant novel. The allegory is a simple one with a simple message: the mists of forgetfulness might be a blessing. Don't try to disperse them before you understand what you are doing. The meaning of the title, however, remained hidden from me until the end of the book; a warning, perhaps, that all is not well.

Superficially, it is a fireside tale, initially narrated in the voice of a storyteller. Axl and Beatrice are a margialised, elderly couple whose community will not even allow them a candle. One day they decide to go on a journey to find a son they can only just remember. Along the way, they pass through a world that never was, apart from the fragments we retain today in old manuscripts and tales.

This soon becomes an exploration of an ancient Britain made from dreams, hardly defined at all. Even then, its landscapes and people could have been made more generic. By rooting the story in the Dark Ages and in Arthurian myth, Ishiguro weighs it down and it struggles to lift itself above its own references. Other reviewers have mentioned Tolkien as a possible influence, pointing to his essay 'Sir Gawain and the Green Knight.' It may be better to cite Tolkien's short allegorical story. 'Leaf by Niggle' where an insignificant artist goes on a different journey of his own. I suspect that tale, which combines the mundane with the metaphysical, is a better reference point.

Where Ishiguro adds a modicum of detail to his story it often seems oddly drawn and tugs at the attention in a way that creates a feeling of misplaced strangeness. Axl and Beatrice's encounter with a boatman and an old woman in the rain-drenched ruins of a Roman villa is a good example. The meeting is frightening, but only partly explained and the effect is distracting. It reminded me of films like 'Spirited Away' where a character will suddenly make an oblique statement, or perform what appears to be a contextually meaningless act. The cultural reference behind the moment is lost on us and we feel uncomfortable. There's a disadvantage to creating these seeming discontinuities in the narrative, because as we parse the events and fail to make complete sense of them, the coherence of the tale suffers.

In itself, this would not be enough to spoil the book. However, taken with the Arthurian references which, for me, never seem completely right or mature enough; the way key information is delivered in oddly mannered speech by characters, and a plodding questing journey through forests, gloomy tunnels and sinister monasteries, the storyline sometimes feels contrived and clunky. At one point I imagined I was playing an old text-based adventure game. 'You are in the pit. The portcullis is raised: a hideous animal runs at you from the darkness.'

In contrast, the fight scenes are pure Kurosawa. Nothing much seems to happen and then, suddenly, there is bloody death. These economical moments are probably. - and frustratingly - the most convincing pieces of description in the novel.

The book comes alive right at the end, as the mist lifts from the minds of Axl and Beatrice. Everything suddenly seems so much clearer, more mundane and tragic. We are back in a recognisable world and it is a cynical one, full of predictability and sorrow. The final paragraphs hammer the point home and they are also very moving.

It is this ending that makes the book worth reading. Like a master caligrapher, Ishiguro sweeps his brush over a plain surface in order to create something that leaps into the mind in a wonderful moment of recognition. The errors I feel he commits are to leave us waiting too long and to make his paper too watermarked with a mixture of cultural references that lead our thoughts astray before his true artistry appears.
続きを読む
35人のお客様がこれが役に立ったと考えています
違反を報告
レビュー を日本語に翻訳する
すべてのレビューを参照します
トップへ戻る
Amazonについて
Amazonでビジネス
Amazonでのお支払い
ヘルプ＆ガイド
日本語ショッピングのための言語を選択します。 日本ショッピングのための国/地域を選択します。
© 1996-2020, Amazon.com, Inc. or its affiliates