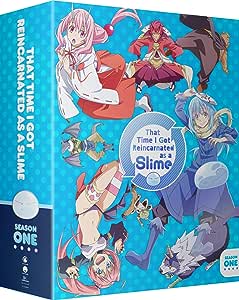 That Time I Got Reincarnated As A Slime: Season One - Part Two [Blu-ray]

Nero In a Nutshell
5つ星のうち5.0 The not trashy isekai
2019年12月15日 - (Amazon.com)
As a big fan of isekai shows, I have succumb my self to a lot of trashy ones. Among the harems and OP thick headed MCs, there are several that stand out as legitimately good shows. Shows like Overlord and Konosuba stand out because they break the standard tropes of isekai, which brings me to this show. That Time I Got Reincarnated As A Slime or TIGRAS for short, despite seemingly a harem show actually really isn't. The manga was very focused on the world building and how Rimuru would change how monsters and humans would live. This gives a realistic sense of how one would try to create a peaceful world of monsters and men. I love the low key message of braking racial barriers in order to create a utopia. With a good story that's basically the opposite of Overlord, the manga made the world of TIGRAS seem more alive than a lot of other isekai. Also the action scenes were badass in the manga so I can't wait to see them in the show.
続きを読む
8人のお客様がこれが役に立ったと考えています
レビュー を日本語に翻訳する

Anime Lover
5つ星のうち5.0 New adventures and new troubles
2019年12月10日 - (Amazon.com)
After the Orc Disaster event and the founding of the Jurai Forest Federation, Rimaru feels that things are looking up for him and his friends. However the events now have eyes on their little corner of the world, from Hero Kings, to crazy demon lords and mythical monsters. But to Rimaru there is one promise he made to a friend and he sets off to become a teacher to a unusual group of children. How will the most powerful slime be able to bubble he way through these events?

This is part two of season one. New characters, new friends, and the beginning of an event that will (in season 2) begin setting our lovable slime onto the path that will take him to his destiny. Overall an enjoyable series and can not wait for season 2.