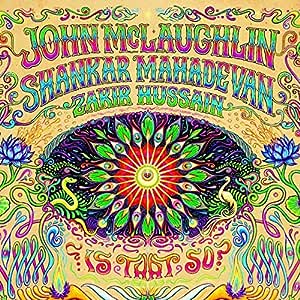 N. Nash
5つ星のうち2.0 Nope
2020年1月17日に英国でレビュー済み
Amazonで購入
Having followed McLaughlin’s career for the last 45 years I have relished the twists and turns, nooks and crannies he has explored, but this one did not work for me. Note that the sleeve notes carry the statement “...your expectations may not be met as you wish..”. Indeed. Note also that there is no guitar but only guitar synthesiser . To be very unkind, the tone (that apparently took 20 years to develop) used sounds like a ‘flute’ setting you might encounter on a secondhand Casio keyboard. To my ear it is all rather dreary, aside perhaps for some engaging tabla playing from Hussain. Try before you buy.
続きを読む
7人のお客様がこれが役に立ったと考えています
役に立った
違反を報告
レビュー を日本語に翻訳する

Some six years in the making, this new album from the legend that is John McLaughlin is the latest in his life's work of bringing together and integrating Western and Eastern music, with Shakti and the legendary Mahavishnu Orchestra - and it's an unmitigated triumph. It's very moving to read in the liner notes how much this musical creation means to John - he writes of "a new concept in the meeting of... the musical cultures of the East and West... The music on the recording is a shining light in my life". I know there's been some debate over the years about John's deployment of the guitar synthesiser - with more purist instrumentalists bemoaning this move and preferring John's virtuoso work on plain old acoustic (and electric) guitars. I'm also very sceptical in general about the relentless incursion of technology into music - but in the case of "Is that so?", to my ear it unambiguously works, and the result is mesmerisingly beautiful. A close friend of mine of Kashmir heritage listened to a pre-release copy of "Is that so?" with me on Christmas Day, 2019: she and her family were blown away by this music; and as a Brit of exclusively Western heritage, so was I. The great man is now 78 years young, and there's absolutely no sign of his incredible output slowing up. Long may he continue to follow his "soul's code" and to thrill his fans across the globe.

Wilfried Schaus-Sahm
5つ星のうち2.0 Not for me
2020年1月31日にドイツでレビュー済み
Amazonで購入
I expected some kind of Shakti album, but Mclaughlin only plays synths and you really have to be a great connaisseur of indian music to follow this form of singing, which dominates the whole cd. Its the first production of McLaughlin that I did not hear to the end. It is not what made Shakti such a thrilling experience - the meeting of easter and western music.
続きを読む
役に立った
違反を報告
レビュー を日本語に翻訳する

Robert P. Sala
5つ星のうち5.0 Do not expect a guitar album
2020年2月8日にアメリカ合衆国でレビュー済み
Amazonで購入
This music is beautiful and very moving and not a guitar based record at all. Instead it is a vocal-based record of songs that were composed as a hybrid of traditional Indian forms and themes and those of the west with the guitar often acting as a support for the spiritual vocals and tabla. In fact, the guitar is more of a trigger for sounds that are created synthetically. Don't purchase this if you are seeking guitar pyrotechnics. Do purchase this if you would like to be transported to a different musical space filled with lush vocalizations. Note: read the lyrics!
続きを読む
3人のお客様がこれが役に立ったと考えています
役に立った
違反を報告
レビュー を日本語に翻訳する

This is what the latest album by McLaughlin, Shankar and Zakir Hussain conveys. It is musically more complex than it seems. Unlike its previous approaches to Indian music, here the melodic system of Western music predominates against the rhythmic rules of the Indian ragas. It is the same way but in reverse. Here the main role is played by the voice of Shankar Mahedevan while McLaughlin's guitar and Zakir Hussain's boards serve as a relaxing and magnificent background. I recognize that I am more interested in the approach of Dave Holland, Zakir Hussain and Chris Potter in their wonderful album Good Hope, but this one is much more oriental is in the relaxation that it produces. An excellent spiritual disc and especially intimately beautiful
続きを読む
1人のお客様がこれが役に立ったと考えています
役に立った
違反を報告
レビュー を日本語に翻訳する