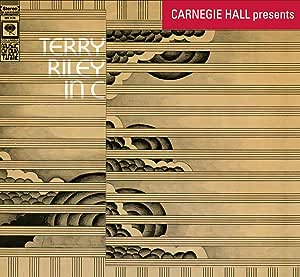 It's been 40 years since Riley's experiments with tape loops and repetition in composition culminated in his masterpiece: In C . Sonic explorers from classical to Krautrock drew inspiration from these 53 intertwined phrases, newly remastered from the original session tapes for the first time ever!

Nick H
5つ星のうち3.0 Disappointing
2013年11月26日に英国でレビュー済み
Amazonで購入
After enjoying Reich's "Music for 18 Musicians" and reading the hype about Riley's "in C" I was a bit disappointed on hearing this. Apparently there are several recordings and I feel I might have made an unlucky choice with this one (a 1967 Columbia recording at SUNY).

What dismayed me is the tone, which is tinny and jangly: it's hard to tell the instruments apart or to hear all the notes (especially the lower ones). As another reviewer pointed out, it's probably a combination of two things: the "gamelan-like" choice of instrumentation; and the quality of the original tapes, which are somewhat old. It's a shame as it's otherwise a beguiling piece of music.

[BTW if you're curious about this piece there's a one-man sequenced version available on the web. Of course that's a very different kettle of fish from a live recording, but well worth a listen IMHO.]
続きを読む
4人のお客様がこれが役に立ったと考えています
役に立った
フィードバックを送信中...
フィードバックをお寄せいただきありがとうございます。
申し訳ありませんが、お客様の投票の記録に失敗しました。もう一度試してください。
違反を報告
レビュー を日本語に翻訳する

Rod Parsons
5つ星のうち5.0 Imagine my delight on finding it available on CD
2015年7月17日に英国でレビュー済み
Amazonで購入
I recollect buying the LP as an import "just in" at Musicland on the corner of Brewer Street, on my way to catch a train down to visit a friend who was at art school in Winchester. A couple of hours later, standing in the flat over the sweet shop on Stockbridge Road it was favourably commented upon by a passing aesthete (in those days the carrying of an exotic LP sleeve often attracted unwanted attention). 15 years or so later I foolishly gave the now very worn LP to a painter friend who had never heard it.
An impulsive act that I often regretted. So imagine my delight etc...
In C with no hiss!
続きを読む
3人のお客様がこれが役に立ったと考えています
役に立った
フィードバックを送信中...
フィードバックをお寄せいただきありがとうございます。
申し訳ありませんが、お客様の投票の記録に失敗しました。もう一度試してください。
違反を報告
レビュー を日本語に翻訳する
その他の国際レビューを読み込む

shelly frape
5つ星のうち5.0 oldie but goldie
2014年6月16日に英国でレビュー済み
Amazonで購入
I once played "In C" in an all night versión at Middlesex University when I was a student there. It wasn't bad (not much audience) but this versión is a LOT better. A classic of minimalism.
続きを読む
3人のお客様がこれが役に立ったと考えています
役に立った
フィードバックを送信中...
フィードバックをお寄せいただきありがとうございます。
申し訳ありませんが、お客様の投票の記録に失敗しました。もう一度試してください。
違反を報告
レビュー を日本語に翻訳する

Mr. David A. Norris
5つ星のうち4.0 Good but you could not listen to it every day
2010年11月9日に英国でレビュー済み
Amazonで購入
I remember this disc from it's vinyl days, and have to say that I find it far more interesting and accessible now than I did in the late 60s. Largely of course that's down to now being able to listen to it as Terry Riley intended rather than on a primitive Amstrad stereo. This is interesting stuff and like most minimalist music from those who mastered the form of far more emotional involvement than it's detractors would have you believe. This disc clearly had a great influence on progressive musicians of the following years and indeed to this day. So for those who follow the likes of the Floyd and Radiohead there is much of interest. Others will still find it impenetrable noise, their loss!
続きを読む
13人のお客様がこれが役に立ったと考えています
役に立った
フィードバックを送信中...
フィードバックをお寄せいただきありがとうございます。
申し訳ありませんが、お客様の投票の記録に失敗しました。もう一度試してください。
違反を報告
レビュー を日本語に翻訳する

G.D.
5つ星のうち4.0 Remastered first recording of this iconic work
2011年9月2日にアメリカ合衆国でレビュー済み
Amazonで購入
Terry Riley's In C is, if nothing else, one of the most epoch-making works of the twentieth century - whether it solehandedly instigated minimalism is a slightly different matter, but at least it changed the face of the musical world. It dates from 1964 and consists of 53 thematic patterns played in sequence; in unison or other alignment. The number of performers is optional, breaks for individual players are allowed, and the individual players themselves decide how many times to repeat a pattern. This, of course, means that every performance will give us a different resulting piece (and it sometimes feels wrong to play the same recording of it twice) - the sequence is specified, but the effect is that the tapestry of sound unfold differently, melding differently from one pattern to the other in a different manner, in each performance (in addition to the fact that different selections of instruments will, of course, create different textures).

The recording at hand is the work's world premiere recording from 1968, duly remastered. I guess there is no real point in comparing it with other performances except in overall character. In that respect this Buffalo performance is strikingly craggy and confrontational, probably due to the central use of wind instruments, though I am not sure I think of that as a positive or negative thing - it makes the music slightly harder on the ear, and could perhaps be a reason to choose a different recording as one's first encounter with the work. Another notable feature of this performance is the notable increase in speed approximately halfway through which interrupts the meditative, mesmerizing quality of the work with a sudden surge of urgency. The remastered sound is fine. I still cannot shake the feeling that detachedly listening to this essentially performers' music is somewhat misunderstanding the point (at least listening to it repeatedly), but the end result is nevertheless strikingly compelling.
続きを読む
3人のお客様がこれが役に立ったと考えています
役に立った
フィードバックを送信中...
フィードバックをお寄せいただきありがとうございます。
申し訳ありませんが、お客様の投票の記録に失敗しました。もう一度試してください。
違反を報告
レビュー を日本語に翻訳する

paul pirate
5つ星のうち5.0 Nostalgia for that unending pulse
2008年4月6日にアメリカ合衆国でレビュー済み
Amazonで購入
Preamble - the wrong product description has snuck onto this page from a nearby alternative. Read for your own amusement.
I recommend to those who want to pursue the question of which "In C" to choose go over to the page for the Bang on a Can version, if only to read some other reviews that raise some significant issues. Among them: if one "learned" the piece in this version from 1968 (when major record companies were braver) and was like many others just bowled over by it, then you may consider it "definitive" -- and have kept it in your head -- much as your first exposure to a more traditionally notated piece that works for you may become frozen in the version you heard first.
Second, yes, I agree, this is first and foremost a performer's piece, a strangely introverted work that may seem to speak directly to its audience (the rules seem so simple), but still seems more about the interweaving of ensemble than aesthetic pleasure (as one reviewer says, one floats in and out while listening, i.e., is ruled by the trance element). "In C" is a improvisation within the tightest of boundaries, a pattern that happens to emulate the self-indulgence of bad soloing in jazz and popular music - audience thinks, come on, musicians, focusing on the movement to the next riff -- but the musicians think, wow, we've stayed in this cool riff combination for more than five seconds!
Someone also complained that the original sounds "too much like a gamelan." Well, that would make sense historically, wouldn't it, if you think of the principles behind Riley (and others' music), and the growing interest in "world music" in the 1960s, and the sheer coolness of the gamelan (well, I played in a few, so maybe I'm also coming from a limited viewpoint).
I haven't heard this transfer, and suspect that the weaknesses in the original recording are if anything more obvious -- the acoustic space always seemed noisy or cramped, and that high-pitched piano pulse never sounded too great. But maybe it just needs to be treated like a modern historical recording (that I happen to like, whatever the sound).
One disappointment, sadly - despite the all-star ensemble, the live recording on New Albion has strange balances, and the percussion really is too present at times. The breathing dropouts and articulation changes stick out as well; the relative murk of the original analog recording covers those moments better, and thus lends even more of a classic sheen to the 1968 recording. The Bang on a Can may end up in my player someday, I'll admit, however.
続きを読む
3人のお客様がこれが役に立ったと考えています
役に立った
フィードバックを送信中...
フィードバックをお寄せいただきありがとうございます。
申し訳ありませんが、お客様の投票の記録に失敗しました。もう一度試してください。
違反を報告
レビュー を日本語に翻訳する