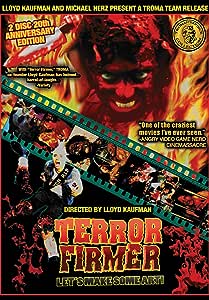 Rick James
5つ星のうち5.0 Toxie/Ron Jeremy 2020!!!!!
2018年11月29日 - (Amazon.com)
Amazonで購入
Revolting though and through that's why I loved it!!! I was eating during watching it at times. Ughhh. Not a good idea lol. Hey, I'm from New Jersey. We like trash. Plenty of it here. Glorious, glorious trash as far as the eyes can see. . . . thank you thank you thank you Kaufman. Just thank you for being part of my life. Such absurdity is welcome in a world that's full of nasty trash. This is fun, glorious trash. My favorite was "boy who plays with severed head". What an absolute child prodigy of an actor. Enjoy! If you're a Troma fan, it's a matter of where you rank this film blah blah blah blah blah I think I'm gonna be sick. . .
続きを読む
3人のお客様がこれが役に立ったと考えています
レビュー を日本語に翻訳する

Scott Lehmann
5つ星のうち4.0 A missed opportunity
2020年2月12日 - (Amazon.com)
Amazonで購入
Terror Firmer is one of Troma’s masterpieces, a film so bonkers, over the top, cheap and cheesy that it never gets old for me. I was really looking forward to replacing my DVD copy with a Blu-ray version.

While the video and audio of the Blu-ray are much improved (not perfect, mind you but really quite good), it is disappointing that it only has one version of the three versions of the film available twenty years ago on the DVD. At least the 20th Anniversary edition contains the best version of the three.

The special features on this Blu-ray are mostly old ones that were available on the DVD with only three new ones as far as I can tell. There are also some special features that didn’t make it from the DVD to the Blu-ray. They weren’t deal breakers for me, but they still would have been nice to have.

The packaging is pretty basic, without a slip cover or anything that would make it stand out from other Blu-rays in one’s collection. Maybe that’s not a bad thing if you’re embarrassed by owning such a film and are trying to be discreet. LOL One would think though that they could have done more to make the 20th Anniversary edition more of a celebration of the sublime zaniness that is Terror Firmer.

I realize I sound more critical than positive here. I am a bit disappointed, but I am still delighted to have this film on Blu-ray. And the price of $20 or less is more than fair. I still consider it a worthwhile new addition to my exploitation film collection, joining films by such luminaries as Frank Henenlotter and John Waters, to be enjoyed by me and my sicko friends for years to come.

My ladies face was stone cold for the first 40 minutes. A plume of toxic lime green clouds covered my living room. I could barely see the television. After a spell or two, the real Toxic Avenger caught the munchies and went back to the kitchen for some more chicken. Ended up putting out a spread that took 15 minutes, mostly to reheat cold sides and veggies. When I came back with plates & to the film, my Lady chuckled a bit. After the hour mark she was dying of uncontrollable laughter. We rewind, play, pause to laugh and laughed all over again.

Softcore flesh film's never tend to get old. Throw in a couple of aging Adult film Starlets and a head liner , 1 or 2 B-List Actors and Actresses, a twisted terribly diabolic plot & gallons of phony blood, limbs, and dark comedy and there you have it.

capnsid
5つ星のうち5.0 How To Avoid making A Troma Film, By Watching A Troma Film.
2010年6月27日 - (Amazon.com)
Amazonで購入
I have never learned as much about the ins and outs of filmmaking as when I could actually watch one baing made, whether it be on set, or viewing a DVD like this. Of course, the BEST way to learn filmmaking is to MAKE one, like I did in film class.

Failing that, the next best way to learn is to watch what NOT to do on set. Terror Firmer recounts fictionally making The Toxic Avenger, with Lloyd Kaufman as a blind director who has to deal with a madman stalikng the cast and crew.

Lloyd, a madman in real life, is shown in the added documentary of this film as pretty much the last person you'd want riding your ass (except maybe Jim Cameron, another madman, though ecologically conscious), and, as in every other doc about a Troma film, you're left pretty much watching Lloyd tear into a bunch of total douchebags, many of whom DO know their head from their ass, but still manage to let Lloyd make them (and often HIMSELF) look like absolute TOOLS. And I plan to pitch a script to him next month! HIGHLY recommended.
続きを読む
2人のお客様がこれが役に立ったと考えています
レビュー を日本語に翻訳する
Amazon.comのカスタマーレビューを見る(75) 5つ星のうち3.9
Amazonプライム会員ならお急ぎ便、日時指定便が使い放題
さらに、映画もTV番組も見放題。200万曲が聴き放題 。クラウドに好きなだけ写真も保存可能。
> プライムを無料で試す