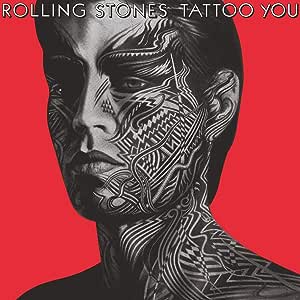 The Punk Panther
5つ星のうち4.0 You make a dead man......
2018年6月17日に英国でレビュー済み
Amazonで購入
This was a not a "new" album from The Rolling Stones in that it was a collection of rejected songs that had been recorded for possible use on earlier albums, dating as far back as 1972. Having said that, they are all tracks of a high quality. In my view, there is not a duff track on there and all of them would have considerably enhanced the albums they were initially recorded for.

The album's stonking, riff based opener, "Start Me Up" dated from the sessions for 1978's "Some Girls" and apparently started life as a laid-back reggae skanking number. Thankfully it changed over time otherwise we would have had that riff. A now iconic Stones track used either at the opening or closing of live shows. "Hang Fire" dates from the same sessions and is probably the weakest track on the album - an upbeat, almost punky rocker with some trite lyrics about nobody working hard enough in the UK. "Slave" dated" from 1976's "Black And Blue" sessions and it a tour de force - bluesy, rocky and featuring a great Jagger vocal and some excellent saxophone from Sonny Rollins too. A true high point. It would have raised the standard of "Black And Blue" no end.

Keith Richard's saucy "Little T & A" comes from 1979's "Emotional Rescue" sessions. It is ok, catchy enough, but, as with many of Keith's songs, it just sort of rambles gently and croakily along. From the "Some Girls" sessions comes the wonderful blues boogie of "Black Limousine". Another high point.

Another one from 1979 is the frantic vocal attack "Neighbours". The repeated title is a bit off-putting and while it seems lyrically bland, it has a breakneck punky appeal, a good vocal and an excellent Bobby Keys saxophone at the end. Also from "Black And Blue" is the beautiful build-up ballad that is "Worried About You", featuring some impressive piano from Billy Preston. Jagger's vocal is top notch on this too, going all falsetto at one point. Imagine "Black And Blue"with this and "Slave"on it.

"Tops" and "Waiting On A Friend" date from 1972 and are both excellent. Mick Taylor featuring on the rocking and soulful former and some Latin-tinged, saxophone groove from The "Goat's Head Soup" Jamaica sessions makes for an appealing latter. "Heaven" is one of those seductive Jagger "solo" numbers dating from 1979 with some hypnotic percussion and a "phasey" deliberately muffled vocal and "No Use In Crying" from the same sessions and is a slow-paced, bluesy ballad with one of those instantly recognisable Jagger vocals. Has a bit of a feeling of automatic pilot about it, though. "Heaven", though, is a remarkably addictive piece of work, worthy of repeated listens.

On conclusion, although not a "new" album, it certainly plays like one, to be fair, and doesn't seem like a collection of cast offs. It is by far the superior to "Emotional Rescue" and "Undercover". It is a good album.
続きを読む
10人のお客様がこれが役に立ったと考えています
役に立った
フィードバックを送信中...
フィードバックをお寄せいただきありがとうございます。
申し訳ありませんが、お客様の投票の記録に失敗しました。もう一度試してください。
違反を報告
レビュー を日本語に翻訳する

igloo
5つ星のうち4.0 Good sound quality, a worthy addition to any collection
2019年10月6日に英国でレビュー済み
Amazonで購入
I have not set out to write reviews of the music content as “beauty is in the ears of the listener”. These reviews are about the quality (or not) of the recorded sound. To read about how the reviews are done please see my profile.

This is a review of the 2009 remaster. Overall the sound quality is good. There is both depth and detail to the sound.

The sound stage is broad and deep with good channel separation. The instruments and vocals are clear without compression or distortion and can be clearly located on the expansive sound stage.

Drums, claps and percussion are on the whole clear and sharp. There is only a hint of softness to the drums which are occasionally mixed a little far back.

Guitars are on the whole recorded with the “attack” associated with the Rolling Stones. This is however a dynamic mix on occasion with guitars advancing and receding on the sound stage. In particular this can be said of the bass guitar.

The vocals are clear and do not descend into a “mush” remaining distinct. Jagger’s vocals have his signature aggressiveness.

Overall this is a many layered recording. Each layer is separate and identifiable especially when saxophone and key boards are introduced. Despite the age of the original recording this is a good remaster and worth buying.
続きを読む
2人のお客様がこれが役に立ったと考えています
役に立った
フィードバックを送信中...
フィードバックをお寄せいただきありがとうございます。
申し訳ありませんが、お客様の投票の記録に失敗しました。もう一度試してください。
違反を報告
レビュー を日本語に翻訳する

P. Thomas
5つ星のうち5.0 Good Remaster
2013年4月9日に英国でレビュー済み
Amazonで購入
I'd almost forgotten Tattoo You, although I love the Stones, Start Me Up, which is probably the best known track on this album is not one of my favourites and somehow the vinyl version never got played very much. I was discussing what was the best good 'ol 12 bar recorded and suddenly Black Limousine jumped into my mind and having dug out the vinyl version and played it and some of the other tracks, I decided to try the Remastered CD, other offerings of Stones remasters have not disappointed and this one is no exception. Black limousine is about as basic as it gets for a 12 bar, but the Stones cut their teeth on this stuff and it shows, they are about as solid as it gets on this one and it reminds you of why the Wyman / Watts rhythm section was regarded as one of the best in the business at the time, Keith & Ron are exactly the right musicians for this one and Mick's harmonica is spot on, I do wish he'd played it more over the years.

The interesting thing about this album is that some of it was recorded some 8 years before during the Mick Taylor era, and songs like Waiting for a Friend and Tops benefit from his playing style, for a sad old git like me who has seen them live with the Brain Jones lineup as well as Mick Taylor and latterly (30+ years now!) Ron Wood, the Mick Taylor era was definitely the best era as far as live performances are concerned.

So this album reflects the best of both worlds, I never felt that Mick Taylor particularly enjoyed the Black Limousine style of songs, so this album gives you side 2 which is better done with Mick T and side 1 which is a real blast from Keith & Ron, they are clearly having a great time and it shines through on the recordings.

Overall if you are a Stones fan then give it another listen I was suitably impressed and this remastered version is a subtle improvement, if you are not a particular Stones fan then this one presents a good cross section of their different styles, backed with good keyboards from messrs Hopkins, Stewart & Preston coupled with some great Sax from Sonny Rollins, what's not to like as they say?
続きを読む
8人のお客様がこれが役に立ったと考えています
役に立った
フィードバックを送信中...
フィードバックをお寄せいただきありがとうございます。
申し訳ありませんが、お客様の投票の記録に失敗しました。もう一度試してください。
違反を報告
レビュー を日本語に翻訳する

DAVID RUSSELL
5つ星のうち5.0 An album of outtakes from the 70's
2019年7月19日に英国でレビュー済み
Amazonで購入
What great album by the stones never actually heard this album apart from the song Start me up, in all my years of listening to the stones this has added to my great collection of there albums 😎✌
続きを読む
役に立った
フィードバックを送信中...
フィードバックをお寄せいただきありがとうございます。
申し訳ありませんが、お客様の投票の記録に失敗しました。もう一度試してください。
違反を報告
レビュー を日本語に翻訳する

J Hanson
5つ星のうち5.0 Just Like Meeting an Old Friend Again
2011年10月30日に英国でレビュー済み
Amazonで購入
When I was at university I got a copy of this album on tape. That was 26 years ago! I recently chucked all my tapes as they were stretching and not worth listening to. So eventually I purchased a copy of Tattoo You on CD. I had it on my Wish List at Amazon with the hope that it would trigger me to buy when it came down in price. It never did, so I bought it for about £8-50. I've bought a few albums on CD recently but I must say this is the best for a while. Like I say in the title its like meeting an old friend after a long absence.
As an aside I saw them on this tour which was released as an album, Still Life in 1981. Even then it was said that this may be their last tour. They were great even though they played a few too many covers for me.
So what a start - Start Me Up - used to promote Windows 95 and Ford cars. This is an instantly recognisable classic which just may have suffered from a little too much airplay. However a classic it most certainly is. The rest of the album didn't get much airplay in fact I think Start Me Up was the album track played on the Still Life tour. However there are a further 4 classics on this album in my humble opinion. In running order they are Slave (awesome sax solo possibly one of the greatest album tracks by the Stones); Worried About You (great Mick falseto which is a feature of Tattoo You); No Use in Crying (lovely mellow track); and Waiting on a Friend (Mick laments the wait on a friend - definately not for a lady, of course not!). On top of those great tracks there's Little T&A which gets the Keith Richards vocal duties as on many other Stones albums before and since. Its a nice typical Stone stomp although feminists may baulk at the meaning of T&A! Hang Fire, Black Limousine and Neighbours are pretty good tracks. Tops and Heaven are the two which sit between good and filler in my opinion.
How does it compare to other Stones efforts? Well my favouites are Sticky Fingers, Let It Bleed and Beggars Banquet. Then there is Aftermath and Some Girls. So I think it sits there in the second tier of great Stones albums. Overall a brilliant album which is incredible as it was rushed to support the tour using outakes and unfinished tracks from previous albums.
続きを読む
2人のお客様がこれが役に立ったと考えています
役に立った
フィードバックを送信中...
フィードバックをお寄せいただきありがとうございます。
申し訳ありませんが、お客様の投票の記録に失敗しました。もう一度試してください。
違反を報告
レビュー を日本語に翻訳する
その他の国際レビューを読み込む

Andy O'Connor
5つ星のうち4.0 Classic Stones
2015年7月23日に英国でレビュー済み
Amazonで購入
Several classic Stones tracks on this album. Particularly the slower songs on side two - waiting on a friend, tops and worried about you. best Stones album of the 80's and 90's until a Bigger Bang in 2005.
続きを読む
役に立った
フィードバックを送信中...
フィードバックをお寄せいただきありがとうございます。
申し訳ありませんが、お客様の投票の記録に失敗しました。もう一度試してください。
違反を報告
レビュー を日本語に翻訳する