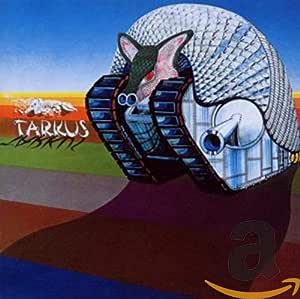 Digitally remastered edition of this album from the Prog Rock trio. ELP found extraordinary success in the 1970s and have sold in excess of 40 million albums. The band are Keith Emerson (keyboards) Greg Lake (bass, guitar and vocals) and Carl Palmer (drums, percussion). Released in 1971, the band's second album is dominated by the anti-war Tarkus suite, which formed the whole of Side One of the original LP. Sony.

S. Lornie
5つ星のうち5.0 Classic Prog!
2018年6月29日に英国でレビュー済み
Amazonで購入
After an excessive binge of prog rock records, I landed myself with five Emerson, Lake & Palmer records. I am reviewing them in order and today’s turn is Tarkus.

So progressive rock is not the most accessible genres of music on the planet. The weird blend of hard rock, jazz and classical is something that makes the live performers comes across as pompous, arrogant and big headed. You would be right on all accounts. But what people don’t appreciate is the sheer level of genius that band’s like King Crimson, Yes and ELP had in their gigantic brains.

Tarkus is a brilliant example of why these guys are some of the greatest musicians in the industry. Sure their song writing abilities were not about catchy pop hooks but the intense musicianship is something that a lot of people need to sit down and listen to. The band play more chords and notes on one song than the average musician is aware of. The average drummer probably couldn’t count a steady beat to at least half of the songs on this album. Probably because the frantic change in tempo and time signature is as constant as Keith Richards’ heart beat. You just never know where it will go next and that is what I love about this band.

The opening track Tarkus is a twenty minute opening monster that is perhaps the band’s most creative number period and a perfect example of what I mentioned above. The seven part epic is a genre defining classic and it is worth buying the album for the song alone. The song still features that raw power that was present on their début album but has an improved sense of music complexity that would make Rush blush. The music is frantic and intense as it constantly swerves through different groove and melodies which is so damn exciting. Sure it must be a little alienating to the average bum but it is a great challenging piece.

The rest of the album is more of the same. There are no real ballads and soft folk tunes as such but more rocking prog. Whilst side two of the album is not bad by any means. The songs are superbly crafted. It just does not compared to the monster title track. Rush fans could compared this to listening to their classic, 2112. Each song is roughly three minutes long and have a much simpler song structure. But good luck following the band on this one. They play like they sold their soul to the prog rock Devil.

Tarkus sits nicely next to Trilogy and Brain Salad Surgery as the centre piece of their back catalogue. They vary in styles but never go into heavier commercial territories like later albums. It is a great continuation of a quadrilogy of albums that deserve more praise. If you like your music complex and weird then I could not recommend this album more. Tarkus is as offensive to musicians as it is brilliant. It puts us all to shame by rubbing the genius in our faces.

Buyer of CDs&#47;DVDs &amp; BluRays
5つ星のうち5.0 Tarkus (2012 3 disc set)
2012年9月4日に英国でレビュー済み
Amazonで購入
I am very happy with this package. What you get is a re-master of the original album. A 2nd CD with some alternative versions and a great re-mix of the classic album by Steven Wilson. The 3rd disc is a special treat, a genuine DVD-Audio of a remixed Tarkus in 5.1 plus a high res stereo mix of the alternative mixes as well.

What more could you ask for? Included also is a great booklet well writen by Chris Welch about Tarkus and the work re-creating this classic album.
The sound in my opinion is stunning considering it was recorded on 16 track tape in 1971. For the price what you get is a very generous collection of discs that cover Tarkus in several ways of listening pleasure.

Spend £10 and enjoy this piece of musical genius all over again. I did and I am sure glad I have.

Just played the 2nd CD using a decent CD player and a high quality headphones and the sound mix is very clear and very well done. This is a treat to the ears.
続きを読む
19人のお客様がこれが役に立ったと考えています
役に立った
フィードバックを送信中...
フィードバックをお寄せいただきありがとうございます。
申し訳ありませんが、お客様の投票の記録に失敗しました。もう一度試してください。
違反を報告
レビュー を日本語に翻訳する

Anglian Traveller
5つ星のうち4.0 The September 2012 Sony NTSC 3-disk box-set of `Tarkus'
2012年9月23日に英国でレビュー済み
Amazonで購入
In 1971 `Tarkus' followed ELP's December 1970 debut album, and remains one of the trio's two or three definitive musical creations (some hard-core fans rate their 1973 epic `Brain Salad Surgery' as their crowning glory, and some prefer their re-working of Modest Mussorgsky's classic `Pictures at an Exhibition').

`Tarkus' is a tight 20-minute piece of several movements, each flowing into the next. It's full of energy, musical virtuosity and innovation, mostly instrumental with a few melodic vocal passages, musing on the futility of war and conflict - surely a more relevant theme now in the 21st century than in 1971. You can hear the influence of jazz fusion in the improvisational sections, and of classical symphonic structure in the way the whole is put together: introducing the main theme, re-stating it with variation, going off on thematic musical excursions in the same key, and finally returning to the main theme with a brief grand finale. Keith Emerson's inventive and ground-breaking (for 1971) use of synthesizers as lead-melodic instrument is a particular highlight of `Tarkus' but all three of the trio are on top form throughout, with Carl Palmer demonstrating mastery of complex percussive time-signatures and Greg Lake belting out full-blooded, multi-tracked vocals and playing some mean electric guitar on `Battlefield'. Some sections of the piece are truly great.

The original 1971 vinyl release featured the `Tarkus' suite on the first side and a curious odds-and-sods second side made up of two joke-numbers (the honky-tonk `Jeremy Bender' and rock-&-roll `Are you ready Eddy?' dedicated to their sound engineer Eddy Offord), two tightly structured hard-rock numbers and an interesting, classical-music influenced two-part hymn called `The only way'. As with Pink Floyd's material from this period, it's hard to think of any band in the 21st century which would offer up this kind of wide palette of experimentation to a listening audience, which is some loss to a more musically impoverished modern generation.

The first CD features the original album mix produced by Greg Lake. The second CD claims to be `The Alternate Tarkus - new 2012 stereo mixes' but you'll need to listen hard to spot the minor differences. What you do get on disk 2, however, are 3 extras:

* `Oh my Father' - a classic ballad from Greg Lake in the `Lucky Man' style (why wasn't it included on the original album? - Too personal maybe?)

* Unknown ballad - with Keith singing (and yes, he can sing OK and in key)

* An alternate take of `Mass' from the `Tarkus' suite

The DVD is in 5.1 surround sound DTS & PCM stereo, and contains all the material from the two CDs. As with the simultaneously released debut album, all the 2012 remixing from the original 16-track recording tapes is the work of Grammy-winning sound wizard Steven Wilson. A 16-page booklet with period photos, full track listings and newly-written story-narrative by Chris Welch completes the package.

This music sounds as good as it ever did, unbelievably fresh after 40 years. No-one - but no-one - is making music like this now. It almost seems that this kind of virtuoso, cross-genre musical innovation is dead; a pity.

The sound - especially on the DVD, if you have the equipment to play it as it's meant to be heard - is good, but falls short of the excellent result on the eponymous concurrently released debut album. The sound on `Tarkus' is in fact a bit on the `quiet' side, Wilson perhaps sensitive to potential accusations of excessive `loudness' which mars so much modern music and digital re-issues by over-compression of the dynamic range. The sound is OK, though: just turn up the volume a bit, and it's fine. This, together with the lean offering of only 3 genuine extra tracks (in contrast to the large amount of extra material on the concurrently released debut-album package) for me demotes it to 4 stars.

However if you don't have this milestone of the 1970s in your music collection, this is the definitive version to buy. Overall it's a fine package and great value at the asking price.
続きを読む
4人のお客様がこれが役に立ったと考えています
役に立った
フィードバックを送信中...
フィードバックをお寄せいただきありがとうございます。
申し訳ありませんが、お客様の投票の記録に失敗しました。もう一度試してください。
違反を報告
レビュー を日本語に翻訳する

Tony
5つ星のうち5.0 No Moss on these Stones despite the Years
2012年9月30日に英国でレビュー済み
Amazonで購入
Tarkus is, in my opinion, one of ELP's best. The title track (all of side 1 in the days of vinyl) is a great piece. It overshadows the remaining tracks but they are good too, from the serious to the fun tribute to their recording engineer (Are You Ready, Eddy?). So this is a good place to start with ELP but my guess is that it will appeal mostly to the faithful.

The key for existing owners is the sound quality. I have had the Manticore release of Tarkus on CD for a long time and that's my comparison start point. The simple answer is that this edition of Tarkus sounds a lot better; the sound is cleaner and more distinct without, thankfully, a superfluous boost in volume level. As others have said, Tarkus has never sounded so good. I have focused on the remastered/remixed stereo version (each multi-track part cleaned and then the whole remixed with the intention of sounding faithful to the original). It's good. For other tastes, there is a remaster of the original mix and then 5.1 and stereo versions on a DVD (there is video on the DVD too but it is essentially just a set of menus).

So Tarkus sounds great and it has also grown by two extra tracks, both solid additions to the album, and an alternate version of one existing track. The whole thing is packaged nicely in a four part card 'roll' that somehow reminded me of the monumental triple vinyl of Welcome Back my Friends! Lots of reasons to buy this and the price is the final bonus.
続きを読む
1人のお客様がこれが役に立ったと考えています
役に立った
フィードバックを送信中...
フィードバックをお寄せいただきありがとうございます。
申し訳ありませんが、お客様の投票の記録に失敗しました。もう一度試してください。
違反を報告
レビュー を日本語に翻訳する

Sir Stephen
5つ星のうち5.0 wow a real ReMaster
2012年9月8日に英国でレビュー済み
Amazonで購入
I have been an ELP fan since the start (I was a fan of The Nice and King Crimson too and the "merger" was well received at the time). This has always been a favourite in my extensive ELP collection (yes I am one of those who buys all the compilations and bootlegs). Listening to the remaster has been like listening to the album for the first time. The 5.1 mix is awesome and worth evry penny. Thank you! Thank you! Thank you!!
I look forward to further releases especially Welcome Back My Friends. Many years ago I went to an art exhibition of ELP related art work and heard a quad mix of the album. I can recall AquaTarkus swirling around the room and hope that mix still exists and is transferred to the 5.1 mix.
Can you improve perfection - sometimes and this is an example of one very welcome improvement (not that I thought one was needed).
続きを読む
1人のお客様がこれが役に立ったと考えています
役に立った
フィードバックを送信中...
フィードバックをお寄せいただきありがとうございます。
申し訳ありませんが、お客様の投票の記録に失敗しました。もう一度試してください。
違反を報告
レビュー を日本語に翻訳する
すべてのレビューを参照します
Amazonプライム会員ならお急ぎ便、日時指定便が使い放題
さらに、映画もTV番組も見放題。200万曲が聴き放題 。クラウドに好きなだけ写真も保存可能。
> プライムを無料で試す