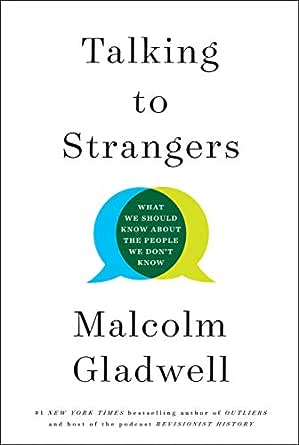 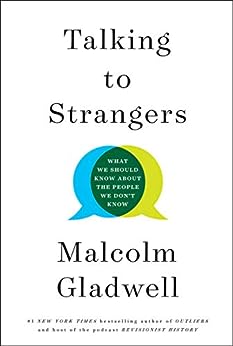 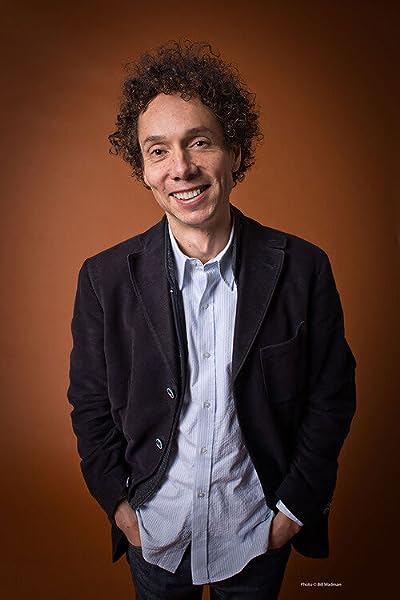 Talking to Strangers: What We Should Know about the People We Don't Know (English Edition) Kindle版

A Best Book of the Year: The Financial Times, Bloomberg, Chicago Tribune, and Detroit Free Pres
Malcolm Gladwell, host of the podcast Revisionist History and author of the #1 New York Times bestseller Outliers, offers a powerful examination of our interactions with strangers -- and why they often go wrong.
How did Fidel Castro fool the CIA for a generation? Why did Neville Chamberlain think he could trust Adolf Hitler? Why are campus sexual assaults on the rise? Do television sitcoms teach us something about the way we relate to each other that isn't true?
While tackling these questions, Malcolm Gladwell was not solely writing a book for the page. He was also producing for the ear. In the audiobook version of Talking to Strangers, you'll hear the voices of people he interviewed--scientists, criminologists, military psychologists. Court transcripts are brought to life with re-enactments. You actually hear the contentious arrest of Sandra Bland by the side of the road in Texas. As Gladwell revisits the deceptions of Bernie Madoff, the trial of Amanda Knox, and the suicide of Sylvia Plath, you hear directly from many of the players in these real-life tragedies. There's even a theme song - Janelle Monae's "Hell You Talmbout."
Something is very wrong, Gladwell argues, with the tools and strategies we use to make sense of people we don't know. And because we don't know how to talk to strangers, we are inviting conflict and misunderstanding in ways that have a profound effect on our lives and our world.

I love this book . . . reading it will actually change not just how you see strangers, but how you look at yourself, the news - the world. Reading this book changed me. (Oprah Winfrey)

A dazzling book . . . Gladwell is a rock star of nonfiction . . . Stories are well selected and brilliantly told, ideas are slowly revealed until the reader arrives at a conclusion they didn't expect. Gladwell is advancing ideas and, sure, they are all open to challenge . . . but they are stimulating and convincing - and you won't regret a minute you spend mastering them (The Times)

Superb writing. Masterful... bears all the marks that have made Gladwell one of the most successful non-fiction authors of his generation. (Pilita Clark Financial Times)

A wonderful provocation which Gladwell delivers like no other, an awakening to just one of the fascinations that lie in ordinary human experience . . . as ever, Gladwell's genius is in the telling. (Spectator)

Fascinating... you should read the book. Not only will it change the way you see and approach strangers, the precision with which he analyses the incident is one of the most powerful and damning indictments you'll read of race relations in American society. (Sathnam Sanghera The Times Magazine)

Taut, provocative, smart . . . Gladwell's cool, playful intelligence has made him one of our leading public thinkers (Ian Leslie)

Malcolm Gladwell made his name bringing intellectual sparkle to everyday subjects, and his new book - about how strangers talk to each other - is no exception. (Sean O’Hagan Observer)

Gladwell's new book looks set to cause another stir with its exploration of why ordinary human encounters sometimes end in catastrophes. (Radio Times)

aj
5つ星のうち2.0 Doesn't deliver.
2019年9月12日 - (Amazon.com)
Amazonで購入
As one reviewer mentioned, the Interlude and the section on Brock Turner are absolutely cringeworthy for a host of reasons. I too almost stopped reading before the I got to the first chapter, and now I'm sort of disappointed that I read all the way to the end. Fascinating facts are revealed in typical Gladwell fashion which keeps the pace moving. But he comes terribly short on providing any sort of value for actually talking to strangers. Gladwell basically says, "Hey! We suck at talking to strangers. Here's some interesting situations that prove my point. But I have no ideas on how to be better at talking to strangers."
続きを読む
921人のお客様がこれが役に立ったと考えています
レビュー を日本語に翻訳する

Betsy
5つ星のうち2.0 Sadly, Gladwell places his foot in his mouth...
2019年9月10日 - (Amazon.com)
Wow, does this book ever suffer from a severe case of foot-in-mouth disease!

I almost didn’t make it past the introduction. In my pre-publication copy, Gladwell writes, “The Sandra Bland case came in the middle of a strange interlude in American public life” and then goes on to discuss a series of cases of police violence against black people that happened around 2014.

That phrasing suggests that this treatment was some sort of aberration in American history and that the violence only happened during the few years he references. Did Gladwell really mean to ignore America’s long history of this problem?

I don’t think so? I think he may have meant that the attention paid to police violence was unusual, but dude, choose your words much more carefully.

Later on, there are some good points made about how and why we tend to misunderstand each other.

But, again, I almost put the book down, this time while reading the chapter on the Brock Turner sexual assault case. Without going into detail, that chapter could only have been written by someone who's buried his head in the sand over the past five years or so.

It’s tough to ignore the problematic elements of Talking to Strangers. I could definitely see the discussion of the causes of sexual assault offending some readers to the point that they abandon the book altogether. I’ve definitely enjoyed other books by the author a lot more than this one. Two stars.

Thanks to NetGalley and Little, Brown and Company for giving me a DRC of this book.
続きを読む
587人のお客様がこれが役に立ったと考えています
レビュー を日本語に翻訳する

Frankie
5つ星のうち5.0 Better on Audible than on Kindle or Hardcover.
2019年9月12日 - (Amazon.com)
Amazonで購入
It's odd to see some of the reviews. I waited until I actually finished the book before adding some thoughts here.

If you are new to Gladwell, you will greatly enjoy "Talking to Strangers"... as it is a must read for anybody who needs to make snap judgements about people's character and behavior.

Of course, if you are a fan of Gladwell, you will of course enjoy it, especially if you hear it on Audible. Gladwell produces the Audible version as if it was an extended episode of his "Revisionist History" Podcast. The music and all the extra interviews from actual people, really brings the book to life.

Heck... if you don't like it, return it... though if you start, you will probably keep it.

booklover10
5つ星のうち4.0 "We think we can easily see into the hearts of others based on the flimsiest of clues."
2019年9月10日 - (Amazon.com)
Malcolm Gladwell is a gifted writer who engages our minds and emotions in his works of non-fiction. In "Talking to Strangers,” he tells us true stories that, at first, seem to be unrelated. A police stop ends in tragedy; Neville Chamberlain and other political figures famously misconstrued Hitler's bellicose intentions; experienced judges grant bail to defendants who, they realize too late, should have remained in jail; the sociopath, Bernie Madoff, conducted a fraudulent investment scheme for years, deceiving many individuals who thought that he was a genius at making money; Amanda Knox served prison time for a murder that she did not commit.

Studies show that most of us who encounter apparently benevolent individuals are predisposed to believe that they are not putting on an act. Conversely, when we meet a man or woman who behaves weirdly or inappropriately, we are likely to jump to negative conclusions about him or her, even when there is little hard evidence to support our assumptions. The author suggests that many of us have an inflated opinion of our ability to size up people. Research suggests that we are not as objective as we would like to believe, and are therefore prone to misinterpret comments, intonations, facial expressions, and gestures. Moreover, we do not always realize that people whose backgrounds differ from ours may communicate in unfamiliar ways.

Gladwell asks: How did double-agents who telegraphed their guilt get away with their treasonous behavior for so long? Why didn't everyone recognize Madoff for what he is—a ruthless swindler? Which of Amanda Knox's personality traits, remarks, and deeds convinced Italian authorities that she killed her roommate? These compelling examples raise intriguing questions about why we sometimes reach erroneous conclusions when we assess the truthfulness of our fellow human beings. it should be noted that a few chapters in this book—such as the essays on suicide, young adults who drink so heavily that they black out, and the efforts of police to cut down on crime—are thought-provoking but oversimplified and not particularly relevant to Gladwell's central premise. Still, this work of non-fiction is an entertaining and enlightening wake-up call. We should be cautious when we decide who our friends are as opposed to who is likely to stab us in the back. Too often we are dead wrong.
続きを読む
442人のお客様がこれが役に立ったと考えています
レビュー を日本語に翻訳する
Amazon.comのカスタマーレビューを見る(869) 5つ星のうち3.9
click to open popover
Amazonプライム会員ならお急ぎ便、日時指定便が使い放題
さらに、映画もTV番組も見放題。200万曲が聴き放題 。クラウドに好きなだけ写真も保存可能。
> プライムを無料で試す