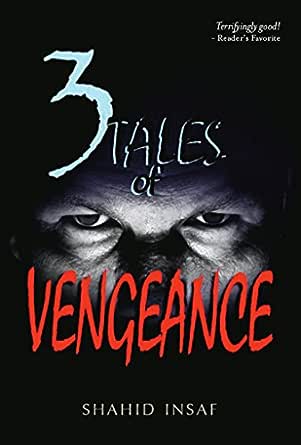 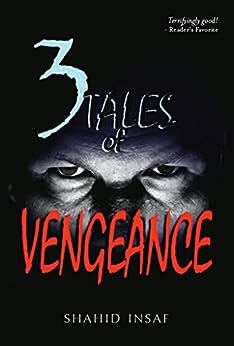 The fury of a loyal friend on a relentless hunt for the criminals who murdered his benefactor - the man who had saved his life. The emotional battle between a suicidal man, tormented and suffering, and the psychiatrist attempting to help him. The trials of a poker player who has to use all his skills, intelligence and courage to rescue someone he cares about before time runs out. Three struggles between life and death. Three stories of hope and despair. Three tales of Vengeance.

Shahid Insaf is a Psychiatrist, novelist and artist who lives and works in Branson, MO. His passion for writing was evident early on in the form of works of poetry and short fiction that appeared in local publications in Bombay, India, where he grew up. He won awards for essay writing in school and did not shy away from difficult and controversial topics like politics and psychology. He completed two novels in his teens, which were unfortunately never published. At age ten, he realized that life is of paramount importance and that he would honor this conviction by becoming a physician. At age nineteen, he set out for the former USSR, where he spent seven years in medical school. This temporarily interrupted his writing career, but also provided him with a valuable substrate for ideas and themes for future writing. His appreciation of the complexities of the human brain and mind led to his desire to be psychiatrist. He was an amateur boxer between ages 20 and 23. In 1998, he received a Diploma from the Institute of Children's literature for articles and short stories written for children and teenagers. In addition to writing, he also kept alive his interest for oil-on-canvas painting and has painted several portraits, landscapes and surrealistic paintings, many of which have been sold to individual collectors. Shahid Insaf also has an interest in poker and has played in the WSOP in Las Vegas on two separate occasions. He identifies a lot of similarities between the game of poker and Psychiatry, both of which can be much better understood from the perspective of Game theory. The practice of Psychiatry has certainly been one of the most important factors in shaping his interests, writing style and even the themes he writes about. A person's motive for doing something, in his opinion, is the most important element that makes for gripping, meaningful fiction. His philosophy of individualism permeates his writing and discussions with friends and loved ones. Integrating his philosophy with aspects of psychology has been a constant quest, and his first published novel, '3 tales of Vengeance' is a perfect example of this effort. His essential goal for writing is to create memorable, unpredictable characters that the reader will remember long after the book is over. Characters who, through their actions, enable the reader to have a rich emotional and thrilling experience, while also providing valuable insights into human motive, morality and behavior.

Nicole
5つ星のうち5.0 Excellent read, highly recommended.
2016年8月31日 - (Amazon.com)
Amazonで購入
I had high expectations for this book since I know the author has a brilliant & analytical mind. This book exceeded my expectations. It was both riveting and thought provoking. It takes the reader on an emotional journey that pivots in unexpected manner, forcing one to pause, think, analyze, reassess. Beautifully written, highly recommended.
続きを読む
7人のお客様がこれが役に立ったと考えています
レビュー を日本語に翻訳する

Bibliophile 76
5つ星のうち5.0 Wow. Amazing Book
2016年9月3日 - (Amazon.com)
Amazonで購入
This is a great book. Reading it was like riding a roller coaster. It starts off a little slow and then bam you're experiencing twists and turns. Not only is this book a true suspense novel it also deals with life, loss, and loyalty. It is one of those rare books that make you a little sad when you come to the last page. Highly recommend.
続きを読む
5人のお客様がこれが役に立ったと考えています
レビュー を日本語に翻訳する

Patsy Witt
5つ星のうち5.0 Author Shahid Insaf
2016年8月27日 - (Amazon.com)
Amazonで購入
Shahid Insaf's book will catch you from the beginning. All three stories are intriguing and will keep you on edge wanting to keep those pages turning. It has humor, excitement and wonder in each story. 3 Tales of Vengeance is a book you won't want to put down but once you are finished will want to read again. Thank you Amazon for this publication, hope to see more from this author.
続きを読む
5人のお客様がこれが役に立ったと考えています
レビュー を日本語に翻訳する

Lynn M. Luspin
5つ星のうち5.0 People are going to love this story.
2016年10月2日 - (Amazon.com)
Amazonで購入
Three Tales of Vengeance was a delight to read. I found myself surprised by the first tale's end but completely into the world and characters Shahid Insaf created. The second tale was a tour de force of great psychiatry and complex characters with deep sadness counterbalanced by a bounding love of life. Final tale was fast paced and totally wove all the tales into a great finale. Bravo to the author! Thanks for a great story.
続きを読む
3人のお客様がこれが役に立ったと考えています
レビュー を日本語に翻訳する

Shabs
5つ星のうち5.0 Excellent Read
2016年10月2日 - (Amazon.com)
Amazonで購入
This was such an interesting and clever book to read. Every time I felt I had figured out the plot something unexpected happened in the story and took me by surprise. Really enjoyed the conversations between the psychiatrist and his patient. But then the author is a psychiatrist himself and from the insights in the book probably a really good one! Particularly caught off guard by the ending. Look forward to the author 's next book!
続きを読む
3人のお客様がこれが役に立ったと考えています
レビュー を日本語に翻訳する
Amazon.comのカスタマーレビューを見る(28) 5つ星のうち4.7
click to open popover
Amazonプライム会員ならお急ぎ便、日時指定便が使い放題
さらに、映画もTV番組も見放題。200万曲が聴き放題 。クラウドに好きなだけ写真も保存可能。
> プライムを無料で試す