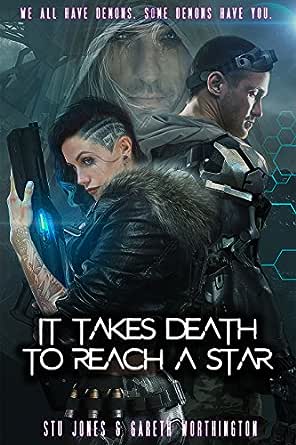 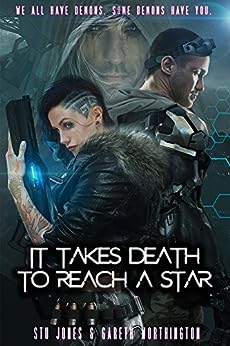 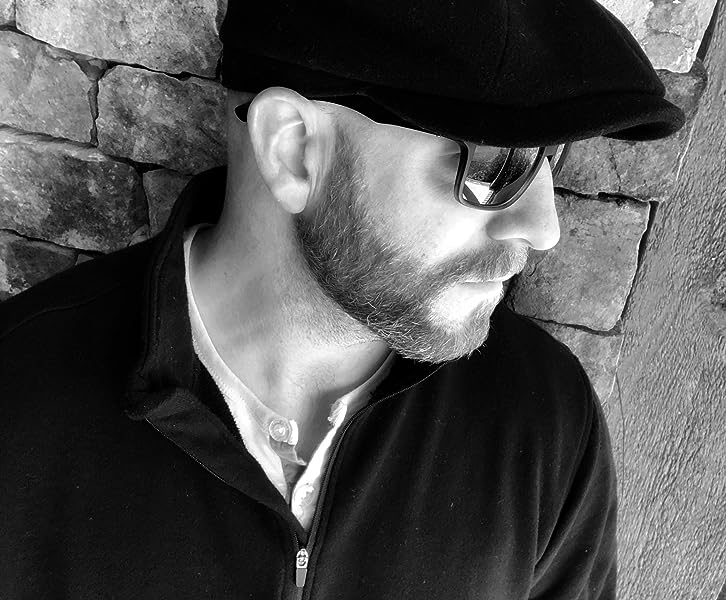 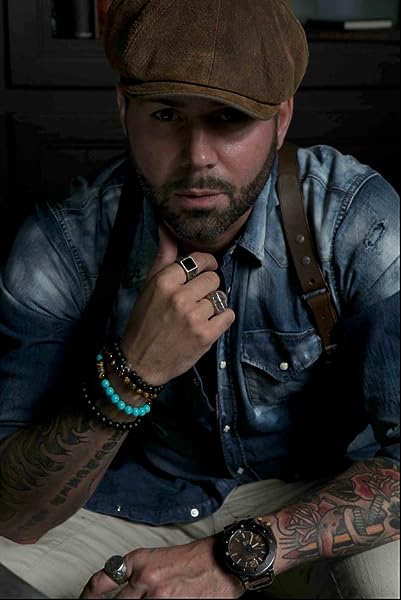 It Takes Death To Reach A Star (English Edition) Kindle版

WE ALL HAVE DEMONS. SOME DEMONS HAVE YOU.

The world you know is dead. We did this to ourselves.

The epidemic struck at the end of the Third World War. Fighting over oil, power, and religion, governments ignored the rise of an antibacterial-resistant plague. In just five years, the Earth was annihilated. Only one city survived—Etyom—a frozen hellhole in northern Siberia, engulfed in endless conflict.

Two groups emerged from the ashes of the old world. Within the walled city of Lower Etyom dwell the Robusts—descendants of the poor who were immune to the New Black Death. Above them, in a metropolis of pristine platforms called lillipads, live the Graciles—the progeny of the superrich, bio-engineered to resist the plague.

Mila Solokoff is a Robust who trades information in a world where knowing too much can get you killed. Caught in a deal gone bad, she's forced to take a high-risk job for a clandestine organization hell-bent on revolution.

Demitri Stasevich is a Gracile with a dark secret—a sickness that, if discovered, will get him Ax'd. His only relief is an illegal narcotic produced by the Robusts, and his only means of obtaining it is a journey to the arctic hell far below New Etyom.

Thrust together in the midst of a sinister plot that threatens all life above and below the cloud line, Mila and Demitri must master their demons and make a choice—one that will either salvage what's left of the human race or doom it to extinction …

Stu Jones has served full time as a law enforcement officer for twelve years. Over the course of his career he has worked as an investigator, an instructor teaching SWAT close quarters and defensive tactics, and as a member and team leader of a multi-jurisdictional SWAT team. He is also trained and qualified as a law enforcement SWAT sniper, as well as in hostage rescue and high-risk entry tactics. He is an Eagle Scout, a lifelong martial artist, and an avid outdoorsman.

bibliomanic
5つ星のうち4.0 Highly original and gritty
2018年9月10日 - (Amazon.com)
Amazonで購入
It's practically improbable to find original work in this genre today, but no question Stu and Gareth are a winning combination. I thoroughly enjoyed this book, if it did seem overly long. Then again, so did the last Blade Runner movie, but during the actual experience I didn't care! I have to be honest and say same here. Well written, fast-paced, interesting science, and plenty of action made this one of the best SF novels I've read in a while. Grab it and simply enjoy the trip--just be sure to keep your hands inside of the ride at all times!
続きを読む
6人のお客様がこれが役に立ったと考えています
レビュー を日本語に翻訳する

Marina Diner
5つ星のうち5.0 Epic sci-fi apocalyptic adventure
2018年5月23日 - (Amazon.com)
Amazonで購入
What an incredible journey this book took me on! Stu and Gareth created such an authentic futuristic world on the pages of their book, that you literally shudder at some of the scenes as you read this apocalyptic thriller. I really enjoyed getting to know, as well as learning more about the main characters, and truly watching them evolve as their journey continued, and they got to become their true selves. I have to say, I did not see that ending coming, and I am so intrigued about the sequel, that I will be first in line to get it :)
As a Russian language speaker, I also appreciated authors' occasional use of the Russian throughout the book, as well as the accuracy of it. Well done!
Knowing how Gareth writes, I can see that a lot of research went into this book, and it is definitely appreciated. Both writers are beyond talented and this collaboration is truly showing throughout the entire book. Thank you for the advanced reader copy of this book and for the opportunity to read it early!

Laurie C.
5つ星のうち5.0 IT TAKES DEATH TO REACH A STAR
2019年3月25日 - (Amazon.com)
Amazonで購入
I like sci-fi books in which have's and have not's are divided by eons of "because that's how it is, and always been" speech. This takes place on Earth, way into future where the only people who live, survive in the coldness of what was once Russia. The towns are enclaves, there is 5 of them below the Lillipads that rise over the enclaves, where genetically enhanced people called Graciles live and work. Also eat well. When a Gracile finds out some hard truths about his existence, he needs to figure out should he help or not.
続きを読む
1人のお客様がこれが役に立ったと考えています
レビュー を日本語に翻訳する

Kindle Customer
5つ星のうち5.0 Excellent story, I hope to read more!
2019年1月8日 - (Amazon.com)
Amazonで購入
At first I wasn't sure I would like the story, Demitri wasn't who I expected though Mila definitely was. That said, I truly enjoyed reading through, and am looking forward to seeing a next installment.
続きを読む
1人のお客様がこれが役に立ったと考えています
レビュー を日本語に翻訳する