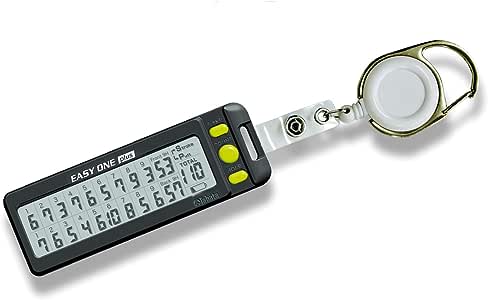 Tucson Consumer
5つ星のうち5.0 Exactly What I Needed - Simple, Easy & Dependable
2019年9月16日にアメリカ合衆国でレビュー済み
色: ブラックAmazonで購入
If you just need a reliable stroke/putt counter for one person, that's easy to use & easy to read, this is the gadget for you. It only has three buttons. A large, round one in the middle to record strokes, and then two smaller oval ones to change between approach strokes & putts and to change holes. Also, it adds your putts to your overall stroke count automatically. So, not only can you easily see how many putting strokes you had at the end a round, but you don't have to do anything special. Just switch to putts when you get on the green, and when you click to move to the next hole it adds your putts to your approach strokes for the completed hole! I know, it sounds simple, but that's what I wanted and I can't believe how hard it was to find that. As far as the instructions, yes, they're all in Japanese but it was pretty easy to figure out how it functions. Hold down the two oval buttons (stokes/putts & hole) at the same time for 2 sec to reset. Press and hold the large round stroke count button to take off strokes on a hole, and press and hold the hole button to back up to a previous hole. Easy (I couldn't believe I could read Japanese!).

In the past, I have used another electronic stroke counter. That one was the same length but wider than this one. I also had trouble with that one counting more than one stroke when you hit the stroke button. It was very sensitive. And, it didn't keep track of your putts. This one is not overly-sensitive.... it's perfect. You hit the stroke button lightly, heavily, doesn't matter it only counts one stroke each time it's pressed. Amazing. I took the velcro strap off my old one and put in on this one. It fit and I like that it doesn't dangle off my belt. "Easy One Plus" is a fitting name, it's just exactly what I was looking for.
続きを読む

BDusk
5つ星のうち4.0 Nice digital score keeper
2019年10月21日にアメリカ合衆国でレビュー済み
色: ブラックAmazonで購入
Great score keeping device. Only complaint is that you can't go back a hole...so if you don't score a hole correctly, you need to either know in your head what the score for that hole was or you need to clear the whole round and rescore it.
続きを読む
違反を報告
レビュー を日本語に翻訳する