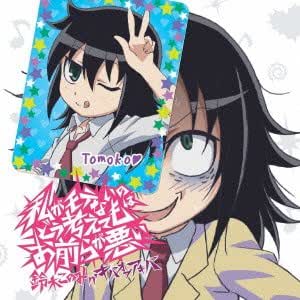 i0un
5つ星のうち5.0 Konomi Suzuki and Kiba of Akiba WataMote Opening theme songs [White Cover]
2013年11月2日にアメリカ合衆国でレビュー済み
Amazonで購入
Great Audio CD and DVD combo with making of videos and promotional clips. Only bad thing is the DVD is region 2 and won't play on normal American players but since this is a Japanese import I won't dock points for it since it is possible to change region code by using dvd ripping software. The CD works fine it contains the opening theme intro everyone is raving about known as WataMote or It's you guys' fault I'm not popular. Tracks are: 1) the original intro theme, 2) intro theme sung by Suzuki Konomi 3) intro theme sung by Kiba of Akiba, 4) Tears Breaker by Konomi Suzuki, 5) Opening theme instrumental karaoke version [No singing] and 6) Tears Breaker karaoke instrumental version [No singing] The package even comes with a shiny foil card for an upcoming game. Make sure you get this white cover one as the black one is just for the single. Another great Audio CD from this series has a pink cover and contains the ending themes.
続きを読む
3人のお客様がこれが役に立ったと考えています
違反を報告
レビュー を日本語に翻訳する