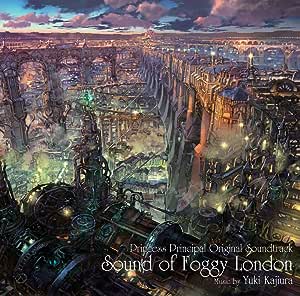 Steve
5つ星のうち4.0 If you like the composer, you will like this
2020年10月16日にアメリカ合衆国でレビュー済み
Amazonで購入
Sound of Foggy London is the soundtrack for the anime Princess Principal, a steampunk spy thriller. I really liked the anime, but I’m a little disappointed with the soundtrack. When played as background music within the anime it works out very well. When extracted and stretched to 90-120sec per track, not so much.

The price is high, but that's to be expected — it’s a Japanese import. For that you get two discs, 43 tracks, almost 90minutes of music. The highlights were the ending song 'A Page of My Story', and Dorothy’s pub song, 'Moonlight Melody'. 'Page' comes in three versions: piano, piano-four hands, and as broadcast. 'Moonlight' also comes in three versions: piano, piano and violin, and as broadcast. もひとつまわして (I’ll take a turn) the girl’s washing song from Episode 7 appears once, in Japanese.

The one omission I noticed was the lack of a track for the ‘traveling music’ that plays when the girls are going somewhere in their car (e.g. at 16:48 in Episode 4).

The rest of the tracks are mostly various flavors of jazz — light, heavy, piano, etc — with the occasional orchestral interludes and screechy electronic music tracks, all by series composer Kajiura Yuki , so if you like her music, you would probably like this. Here’s a site (in Japanese) with 30sec sample clips.

Overall, the music (other than the highlights) was unmemorable, despite the fact that it fit well in the anime; a few tracks were unlistenable to these somewhat elderly ears. I figure I paid ~$10/min for the music I’d want to listen to in my car.
続きを読む
違反を報告
レビュー を日本語に翻訳する
すべてのレビューを参照します
Amazonプライム会員ならお急ぎ便、日時指定便が使い放題
さらに、映画もTV番組も見放題。200万曲が聴き放題 。クラウドに好きなだけ写真も保存可能。
> プライムを無料で試す