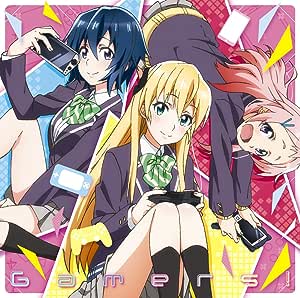 Olde Coyote
5つ星のうち5.0 Support your favorite show's seiyuus!
2018年4月14日 - (Amazon.com)
形式: CDAmazonで購入
I'm not going to lie. My enthusiasm for this CD is almost certainly influenced by my love of the anime combined with a desire to show a little support to the voice actresses. (Actually, all the Japanese voice actors did great work in the anime, but how often do you hear songs sung by male seiyuus?) There's also the fact that in general I'm a sucker for anime tunes sung by a show's seiyuus. Bottom line: I found these songs good enough to add to my listening mix.

The description doesn't include a track list, but this CD follows the usual format of anime-related albums. It features the anime's opening song in its natural full length (3:21) rather than the trimmed 1:30 broadcast version. There are also the all expected variant mixes so you can listen to your favorite character singing lead. Finally, there's the bonus song "Surechigai Quest". I was pleasantly surprised by this song and it quickly became my favorite track of the CD.