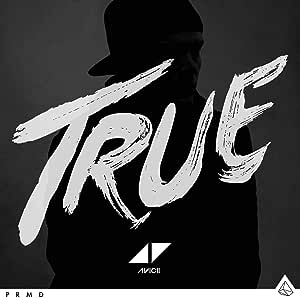 Whilst it can be debated whether or not the number one single Wake Me Up is really country music, there can be no doubt with the third track on this album, Hey Brother. You just know with some songs if they are one genre or the other, and Hey Brother is country music without question. Even though it has a beat to it and all the other EDM effects, it's more country than many country artists are now, even fused - and fused incredibly successfully - with Avicii's refreshingly diverse dance music ingredients.

It's not all country though, and the second track, You Make Me, is more in the vein of the music we've come to expect from Avicii - who is one of those rare DJ / artists who actually makes a real attempt for every track he puts out to sound unique and different from the others. Funk-tinged, infectious and offbeat, it's the second single for a very good reason.

The soul/pop of Addicted To You is an excellent gateway into what was already a fan favourite before this album even had a title - Dance In The Water, often wrongly accredited as featuring Lana Del Ray - appears here under the name Dear Boy. It's the longest track on the album, and it deserves to be, as it is possibly the best creatively and appears at that point on the album where many people listening for the first time will suddenly make the realisation that they already really love this album.

The second half of the album continues to play about with the genres, bringing funk, rock, swing and pop into the mix to various degrees on Liar Liar, Shame On You and Lay Me Down before tricking you into thinking you're entering chillout territory on the Antony and the Johnsons cover Hope There's Someone, which builds up and pulls back the beats at just the right times. The album closes with an instrumental featuring piano and strings, but if you're got the digital special edition it keeps going with Always On The Run, which is a more poppy track than any before it.

Perhaps because 10 tracks is seen as the correct amount for a "proper album", one of the other special edition tracks - once you have heard it - is conspicuous by its absence, especially because it would have also brought jazz to the album. That track is Long Road to Hell, and although you can't get it through Amazon, I'm sure Amazon wouldn't mind me recommending that you go over to i-somethingorother (am I allowed to mention it?) and download that track too.

If the type of case you get for the physical release matters to you, as it does to me, then you may be pleased to know it's not a cardboard sleeve but one of those new round-edged jewel cases.
続きを読む
35人のお客様がこれが役に立ったと考えています
違反を報告
レビュー を日本語に翻訳する

The Quibbler
5つ星のうち5.0 True - trans genre music
2014年11月25日に英国でレビュー済み
Amazonで購入
Whilst Avicii is largely associated with electronic dance music (EDM), this album is a dizzying amalgam of big band, blues, country, rock and soul. And I've probably left out a couple of musical genres in that description. EDM is the common factor that is weaved into all the tracks. I've never heard anything quite like it. I can't say I'm wholly taken with every single track but there are too many which are simply so good that it would not be right to award anything less than five stars.

Top of my list is the superb 'Wake Me Up' with vocals by Aloe Blacc. This is such a moving and uplifting song: it instantly catches your attention with its country guitar rhythm, the vocals start telling the story, and you're hooked as it moves towards EDM choruses. Incidentally, the accompanying video is a visual treat and, providing you take it at face value and ignore the storyboard inconsistencies and product placement that so irks some critics, it accomplishes the rare feat of actually enhancing the song. It features the beautiful Russian super model Kristina Romanova and the über pretty American girl model Lanya Grace. It tells the story of them finding their place in society. Nigh on half a BILLION hits and counting on a certain video website testifies as to how popular this song is.

Next favourite is 'Hey Brother' with vocals provided by American bluegrass singer Dan Tyminski. Another song which captures your attention instantly, this time with its vocals. There is an ear worm trumpet/dance beat and the lyrics are about family/friends and blood being thicker than water. Again a surprisingly moving song which had me thanking God for all the support my family has given me over the years.

I also liked the rather strident 'You Make Me' with its heavy piano backing combined with EDM choruses. Never thought I'd ever put that in a sentence together. And that sums up this album. It is just such an eclectic mix of styles, which on paper at least, shouldn't work. Yet they do. The rest of the album is more EDM based yet you will still find, for example, orchestral elements.

TakeThatnut
5つ星のうち5.0 An all time favourite album
2020年8月28日に英国でレビュー済み
Amazonで購入
I have all Avicii's albums. The only DJ that I really rate. Without him it's just flat. He brought an excitement that is now gone. The words to his songs now mean alot more. The big hits are on here Wake Me Up, Hey Brother but my particular favourite is Dear Boy. "oh boy your fine do you remember our time". He moved away from the EDM stuff later on but this was his "time" and probably his best album. He will always have his time in dance music, a legend, classic album. It will stand the test of time. Such a sad loss. I hope you have peace Tim. #Aviciiforever
続きを読む
違反を報告
レビュー を日本語に翻訳する

SpeakerGuy
5つ星のうち5.0 All time favourite.
2020年10月30日に英国でレビュー済み
Amazonで購入
My biggest regret is not getting this sooner.
And not getting Avicii's other albums, of which, are virtually non-existent to purchase on vinyl.
Avicii has created a legacy that will last for many generations.
RIP you legend.
続きを読む
違反を報告
レビュー を日本語に翻訳する

PC
5つ星のうち5.0 Fantastic - never heard anything like it
2014年1月29日に英国でレビュー済み
Amazonで購入
OK it might be close to my sixth decade on this planet but as a result I have had a wide ranging interest in music and have never been afraid to try something new. Sometimes it works others it doesn,t but this is great music from a guy I have never heard of ( read up about him since though) and it works as relaxing, driving, bopping music and the production is first class.
I thought that DJs just played records but this guy writes his own and collaborative stuff and uses real artists not just samples to create addictive music.
Many different vocal and musical styles.
Deserves to be played LOUD!
続きを読む
16人のお客様がこれが役に立ったと考えています
違反を報告
レビュー を日本語に翻訳する
すべてのレビューを参照します
Amazonプライム会員ならお急ぎ便、日時指定便が使い放題
さらに、映画もTV番組も見放題。200万曲が聴き放題 。クラウドに好きなだけ写真も保存可能。
> プライムを無料で試す