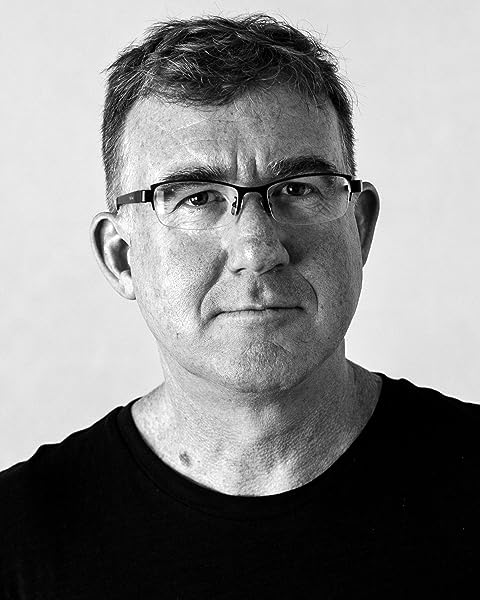 Peter Ryan is an English professor at a university in South Korea. He grew up in Perth, Western Australia. Sync City was inspired by a tour of the synchrotron at the University of Saskatchewan, in Saskatoon, Canada, and the question of what would happen if something went horribly wrong. Peter lives with his wife in Seoul. Sync City is his first novel.

R. Goss
5つ星のうち5.0 A great ride--more fun than a vegan barbecue!
2018年10月13日にカナダでレビュー済み
Amazonで購入
In general, I tend to be a bit picky about my fiction, and for the most part, I've never been a big fan of dystopian, futuristic stories, either in literature or on film. However, a friend strongly recommended Sync City for me awhile back--and I'm really glad he did, because this is one of the most enjoyable reads I've come across in a long, long time.

The story is based around a rough character named Jack Trevayne: a bike-riding, hard-cussing, hard-drinking "Keeper" who is responsible for, among other things, protecting what is left of humanity from the various clans and creatures who are running wild across the Earth's devastated landscape. The author, Peter Ryan, sews Jack's fragmented tale together by shifting from his past to his present in two largely separate storylines--and while Ryan is certainly not the first writer to juxtapose disparate plots into one overall story, the two stories presented here almost feel like they're in two entirely different novels, due to the cast of colourful misfits that are part of Jack's past and present life.

The real fun here, though, is in the writing itself. Ryan has a great way with words, and some of his lines are so cleverly crafted that you either find yourself wowed or literally laughing out loud. "Rig-rats have digestive systems that make real rats envious." "His head would burst like an over-dressed condom on prom night." "She was cool, composed, and full of answers. I wanted some. Answers, as well" These are just a few samples of the seemingly boundless witty writing that fills these pages.

Sync City, as I said above, is a great "ride" for anyone looking for a fun, fresh and invigorating read. Highly recommended.
続きを読む
違反を報告
レビュー を日本語に翻訳する

tom daugherty
5つ星のうち5.0 I want to read more
2017年4月3日にアメリカ合衆国でレビュー済み
Amazonで購入
I loved this book!. It's been some time since I've read scifi and this book has inspired me to read more. I hope Mr. Ryan is making further installments of this story--the ending left me feeling like this is a real possibility. I found it difficult to put this book down, and that was only made possible when my wife gave me that "put that book down and pay attention to me.," look.

The story is awesome! Zipping back in forth in time is always a real mind-bender, but Mr. Ryan does an excellent job in setting up each scene. The characters are all super cool. I feel like I would enjoy having a drink with any of them (except maybe the scythers).

Rick Heinz
5つ星のうち5.0 Just like this book
2017年8月9日にアメリカ合衆国でレビュー済み
Amazonで購入
It really is a mix of Blade Runner meets Mad Max and a splash of Time Paradox.

The tagline sums it up: The future is complicated. Jack is not.

Just like this book. The setting and the backdrops are interesting and valued, the factions... a bit complicated at times, but the down to earth protagonist provides you with a nice frame of reference. Why the five stares? Because I have a strong appreciation that blends two existing genre's together.
続きを読む
違反を報告
レビュー を日本語に翻訳する

E Evan
5つ星のうち5.0 A great read
2017年6月30日にアメリカ合衆国でレビュー済み
Amazonで購入
This book is fabulous. If you like Mad Max, Jack Reacher, you'll love this book. Grab a beer, get comfortable, and enjoy the ride. Its a well paced, exciting take on a gritty dystopian future with an engaging antihero; always a win! Plus who doesn't like a nod to a favorite 80s hero, Knight Rider? My advice- BUY THIS BOOK.
続きを読む
1人のお客様がこれが役に立ったと考えています
違反を報告
レビュー を日本語に翻訳する
すべてのレビューを参照します
トップへ戻る
Amazonについて
Amazonでビジネス
Amazonでのお支払い
ヘルプ＆ガイド
日本語ショッピングのための言語を選択します。 日本ショッピングのための国/地域を選択します。
© 1996-2020, Amazon.com, Inc. or its affiliates