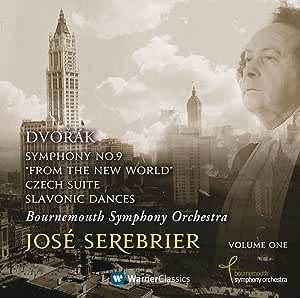 Latin GRAMMY-winner conductor and composer Jose Serebrier is one of most recorded classical artists in history. He has received thirty-seven GRAMMY nominations in recent years. When Serebrier was 21 years old, Leopold Stokowski hailed him as 'the greatest master of orchestral balance'. After five years as Stokowski's Associate Conductor at New York's Carnegie Hall, Serebrier accepted an invitation from George Szell to become the Composer in Residence of the Cleveland Orchestra for Szell's last two seasons. Szell discovered Serebrier when he won the Ford Foundation American Conductors Competition (together with James Levine). Serebrier was music director of America's oldest music festival, in Worcester, Massachusetts, until he organized Festival Miami, and served as its artistic director for many years. In that capacity, Serebrier commissioned many composers, including Elliot Carter's String Quartet No. 4, and conducted many American and world premieres. Serebrier s latest release on the Warner Classics label, in which he leads the Bournemouth Symphony, is the first of a series of recordings of the music of Antonin Dvorak. This first recording features Dvorak's beloved Symphony No. 9 'From the New World.'

drdanfee
5つ星のうち5.0 Serebrier / BournemouthSO: Dvorak Sym 9 plus: Winning, jaunty airs with Bohemian flair ...
2012年11月18日にアメリカ合衆国でレビュー済み
Amazonで購入
Distinguished conductor Jose Serebrier has never really settled into one of the top ten or top twenty Music Director posts that are now scattered around the world. He's been around, though, starting off by helping Leopold Stokowski do a pioneer stereo recording of Charles Ives' Fourth Symphony ... earlier considered nearly unplayable. For a while an old Stokowski quote followed Serebrier around on almost every new release: He is the greatest master of orchestral color.

Latin temperament melded to considerable skill, lighted up by marked inspiration? That is the sort of results we get when Serebrier's musical leadership catches fire. So while a pretend A&R fan might not have quickly landed in Bournemouth to sign contracts with their imaginary Dvorak orchestra - quite a few of us would have dreamed about, say, Czech PO, or perhaps, even, Theodor Kuchar and the Janacek PO? - Bournemouth turns out to pretty much have the goods, and Serebrier has a winning way with both his chosen orchestra and this composer. In the famous culmination of Dvorak's arrival in USA to assume the post of Director at a rich lady's ambitious National Conservatory in New York City, Dvorak managed the stunning nationalistic feat of remaining true to himself and his Czech Bohemia roots while fluently absorbing riches in the new, bustling culture. Thanks to students from African American (Walter Burleigh) and Native American heritage, Dvorak led the way in just those folk music inspired directions that the rich New York lady had imagined, in the first place.

Of course the New World is among the most popular - and thus, the most hackneyed in our local concert halls - of Late Romantic Nationalistic symphonies, reaching towards modernity after Wagner, Brahms. Serrebrier and company generate vitality that speaks to the warmth of human hearts as much as to the musical minds wondering, What else is new? The opening of the symphony is paced just right, though not as slow as big imposing manners have sometimes pitched it across our North American footlights. The warmth and polish and sparkle of the Dvorak woodwinds is a constant presence in this symphony, so the first movement gives those players plenty of chance to shine. Serebrier is able to strike a very nice balance between letting his orchestra departments sing and breathe, while he keeps a masterful hand on the tiller of tempo.

This magical balance invites us into the famous opening of the Largo second movement, and some listeners may fear that Serebrier has Bournemouth being too off-hand. The glowing chords that change gears in those repeated harmonies are played for songful warmth, not solemnity, and perhaps not even for as much wistful nostalgia as some may want. When the contrasting section comes that is also songful, we are called into a sort of bardic folk narrative, as if Dvorak had been inspired by some Song of Hiawatha. It's undeniably middle-European, yet North Americans have taken this magical second movement to their hearts that we claim its ways for ourselves. When the horns and lower brass take over the succulent chords that opened the second movement, we are drifting off into Rip Van Winkle slumbers as neatly as not.

The Scherzo is all a-bustle, as Dvorak's New York City must have seemed when he arrived to help that wealthy benefactress found a nationalistic school of North American music. The Trio's charms seem to be reminding us that, even as a famous European composer strolled about in such a famous big city of this era, the USA is a predominantly rural countryside replete with folks, farms, towns. Listening to Serebrier and Bournemouth I found myself thinking that this abundant, lively local rural Ethos-Mythos still cast deep, dark shadows. Part of what Walter Burleigh brought to Dvorak's conservatory was, after all, those slave songs and spirituals of the humid deep South. By the time James Agee penned his Knoxville text, acknowledging the passing of an era and the torments of displacement as a rural people saw their children move far away to big cities, and by the time Samuel Barber sets that Agee text for mourning high voice, we are far beyond the hope of having nothing but a fresh happy folk music to sing and play in America.

The final movement wraps up all that has come in the previous three chapters, consistent, energetic, beautiful, satisfying. Ah, those Dvorak woodwinds. Who knew they had settled in Bournemouth? One of Serebrier's trenchant gifts is that he knows so well how to let his orchestra breathe, sing, and then build into a less casual presence as the music gathers. The high drama that rises, then falls back in this final movement, never for a split second sounds artificial or forced. For once the winding down of the symphony's ending as those last, fading chords are held avoids sounding inept. This close now has just the right touch to remind us that we have been immersed in musical folklore, among other things.

To open and close the concert, we get two Slavonic dances, Numbers 1 of Opus 46 and 2of Opus 76. And Dvorak's Czech Suite follows the ninth symphony. One wants to hear Serebrier and Bournemouth finish up the Dvorak symphonies, then give us the three concertos, respectively, for cello, violin, and piano. Thanks Warner.

J. K. Davis MD
5つ星のうち5.0 Surprisingly good
2013年10月2日にアメリカ合衆国でレビュー済み
Amazonで購入
Dvorak's 'New World' is one of classical music's greatest hits and has been endlessly performed and recorded. This is one of Serebrier's relatively few forays into the core repertoire, and I feel that he really hits it out of the park. I can't point to any new ground broken here, but more often than not if you notice something different in a 'core' work like this it isn't a good thing (with a few exceptions such as Harnoncourt). The Czech Suite is well done too. In Nature's Realm doesn't excite me here or in any other performance of it I've heard. Worth owning even if you have several Dvorak 9th recordings.
続きを読む
1人のお客様がこれが役に立ったと考えています
違反を報告
レビュー を日本語に翻訳する
すべてのレビューを参照します
Amazonプライム会員ならお急ぎ便、日時指定便が使い放題
さらに、映画もTV番組も見放題。200万曲が聴き放題 。クラウドに好きなだけ写真も保存可能。
> プライムを無料で試す