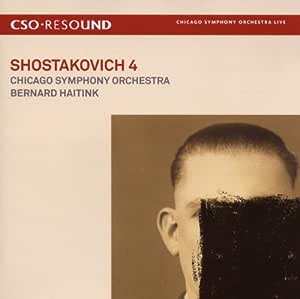 Autonomeus
5つ星のうち5.0 Haitink leads the magnificent-sounding CSO in a powerful, dark-hued Fourth
2018年5月30日 - (Amazon.com)
形式: CDAmazonで購入
The first recording of Shostakovich's Fourth Symphony that I heard was Haitink leading the London Philharmonic in 1979 (see my review of Haitink's Decca cycle). I was initially impressed, but I came to find it ponderously slow compared to others, including my reference recording by Neeme Järvi leading the Scottish National Orchestra in 1989 (see my review).

Haitink has not changed his interpretation. This May 2008 recording with the Chicago Symphony Orchestra is two minutes longer. But this time the effect is far more powerful -- the CSO sounds magnificent, and Haitink creates a sense of inexorability with the orchestra's dark, rich tones. There is one moment here that is a revelation -- at the 10:19 mark in the third movement, following a long build-up of slashing, staccato strings, there is a crescendo with timpani that Haitink shapes gloriously, with the orchestra entering like an opening to a new dimension. I had never noticed this moment in the score before, and comparing it to other recordings, Haitink surpasses them all in realizing its potential. Following the culminating cataclysm with cymbal crash, Haitink draws out the long, tortured coda, creating a maximum sense of tragedy.

While certainly not replacing Järvi, or Kondrashin in Moscow in 1966, this is a great new Fourth with a unique interpretation -- a great addition to any Shostakovich collection.

*** *** ***
CSO-Resound's 24-page booklet includes liner notes in English, French, and German. Also included is a 57-minute DVD that provides historical context for the symphony. It is well-known that the Fourth was completed in 1936, but not performed until 1961. Stalin's purges and DSCH's fear of a "knock-on-the-door" were the reason for the 25-year gap. I would not rely on this film for understanding, but if you don't know anything about it, it can serve as an introduction.
続きを読む
3人のお客様がこれが役に立ったと考えています
レビュー を日本語に翻訳する

Erich L
5つ星のうち5.0 Awesome
2015年9月25日 - (Amazon.com)
形式: CDAmazonで購入
This is absolutely the best recording I have ever heard of this symphony. If Shostakovich truly wanted to write "music for the people", then THIS is the aggressive nature in which the 4th symphony should be performed. It takes me straight into the horrible world that Stalin created...puts tears in my eyes. It's like reading a novel.
As always with CSO, the brass section sounds fantastic. I'm a little biased, since I studied with Gene Pokorny :)
続きを読む
5人のお客様がこれが役に立ったと考えています
レビュー を日本語に翻訳する