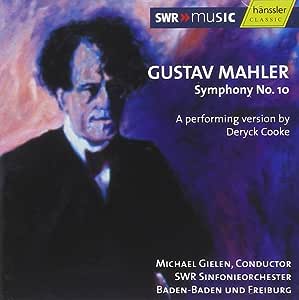 "Michael Gielens Mahler cycle is now complete, and as predicted it moves straight to the top of the list as the most idiomatic and consistent single set currently available." -CLASSICSTODAY

Michael Gielens Mahler interpretations have attained an almost cult status among collectors. Mahlers deeply personal 10th Symphony, never completed, but realized for performance by Mahler/Bruckner expert Deryck Cooke, has been the subject of discussion and controversy since Mahlers death.

"Michael Gielen痴 Mahler cycle is now complete, and as predicted it moves straight to the top of the list as the most idiomatic and consistent single set currently available." -CLASSICSTODAY

Michael Gielen痴 Mahler interpretations have attained an almost cult status among collectors. Mahler痴 deeply personal 10th Symphony, never completed, but realized for performance by Mahler/Bruckner expert Deryck Cooke, has been the subject of discussion and controversy since Mahler痴 death.

MartinP
5つ星のうち5.0 A recording to cherish!
2006年7月16日にアメリカ合衆国でレビュー済み
Amazonで購入
Many big-name conductors still piously avoid the performing version of Mahler's Tenth, but fortunately many others, from Rattle to Chailly, don't. Thanks to the latter, the Cooke edition is now firmly established as part of the repertoire, effectively extending the Mahler canon to eleven symphonies. And rest assured that its final instalment is no half-hearted attempt or an underdeveloped premature child - this is very potent and fascinating music, bone-chilling, heart-wrenching, and deeply comforting in turn. Moreover, it completely overturns the common perception of the Ninth as a valedictory work, and ruthlessly but movingly reveals the composer's deep and tormented love for his adultrous wife.

Michael Gielen is just the man for this kind of work. His approach is clearsighted and unsentimental. He does not cover up its unfinished state with overblown demagogics - yet, through his great affinity with 20th century music, he delves deeper into the many audacious and forward-looking details that pepper this opus than any other conductor I've heard. The opening adagio is, maybe, a tad cool and aloof compared to some others, and the great, organlike outbreak does not come with the welter of sound heard from a Chailly, but its atmosphere of loneliness and uncertainty is poignant to say the least. The first scherzo is controlled but in no way inhibited, ideally paced, and crowned by a raucous climax. The sheer delicacy of the subsequent brief Purgatorio movement is breathtaking - among the six or so versions I know of the Tenth, this is easily the most beautiful performance of that piece. The horrific graveyard dance that follows in the second scherzo can never have sounded more frightening. The violence of the very loud drum strokes then opening the Finale are a contentious choice - most conductors nowadays opting for a more realistic emulation of a muffled drum heard from afar - but of course they engender huge drama. If you can listen to the ensuing flute melody with dry eyes, your tear ducts must be clogged. Played as it is by these musicians, it is one of the most intensely moving things you will ever hear.The entire finale is the high point of this recording, its seperate sections perfectly balanced, the anguish from the adagio slowly creeping in, then bursting out in two repeats of the full atonal chord from the first movement. The sustained trumpet note stringing these chords together is not only executed to perfection, but even gets a dynamic hairpin profile I haven't heard before and which is greatly effective. Then, with the entire orchestra picking up the flute melody, Gielen gives us something like the musical equivalent of a perfect late summer sunset, and we drift away in sheer bliss - a bliss he refuses to disturb with an overstated surge when the violins leap up one last time and the entire ensemble follows suit. Here, it is more like a final, contented sigh.

The playing of the SWR orchestra is faultless, dedicated and consistently beautiful. So is the recording, which is warm and involving while retaining an analytical clarity unmatched in any of the other recordings I know. In all, this Mahler X is as good as any, better than most, and in the finale it arguably surpasses them all.
続きを読む
24人のお客様がこれが役に立ったと考えています
役に立った
フィードバックを送信中...
フィードバックをお寄せいただきありがとうございます。
申し訳ありませんが、お客様の投票の記録に失敗しました。もう一度試してください。
違反を報告
レビュー を日本語に翻訳する