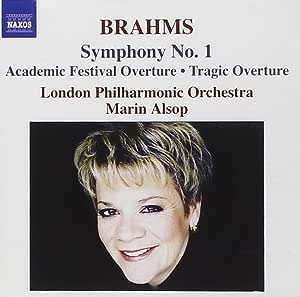 Naxos is obviously excited about this recording, publicizing it widely and issuing it in three different formats (this plain CD, as well as SACD and DVD Audio). You can understand the excitement immediately, as the Symphony opens with tremendous power, fortified by uncommon energy in the kettledrums, signifying that there's going to be no routine playing here. But Alsop is not all aggression; her Andante sostenuto is very tender and affecting. Detail work is just wonderful--listen, for example, to the gorgeous flute solo in the fourth movement introduction--and Brahms's syncopations, always a major aspect of his style, get their full due in this rhythmically alert performance. Both Overtures are vividly characterized, and the Academic Festival retains its humor more than usual. At this point there are so many Brahms recordings that no single one is going to satisfy all of our needs, but this recording is competitive with the best in artistic and sonic aspects. In price, it mops the floor with the competition. --Leslie Gerber

Completed in 1877, Brahms' remarkable and impressive Symphony No. 1 was the result of a fourteen-year gestation period and established the composer as the leading German symphonist of his generation. This inaugural issue in a major new cycle on Naxos brin

Andrew C. Mitchell
5つ星のうち5.0 Listen to this
2014年11月18日に英国でレビュー済み
Amazonで購入
This is a good performance at the price and well able to hold its own with fine performances of the past and present. - the First Symphony AND in addition the Academic Festival Overture and the Tragic Overture. In the First Symphony the structure is beautifully balanced between the dramatic action of the first and last movements, compared with the more gentle lyricism of the second and third movements. In the first movement, I particularly felt moved and shaken by the pounding and tolling of the timpani. There is lovely work from all the members of the woodwind in the middle movements. In the first and final movements there is powerful and moving work from the horns. But in the final movement opening there is a sense of awe, mystery and menace. Also the brass chorale is brought off beautifully. Throughout this recording there is a sense of forward movement and purpose leading to the final triumphant conclusion and its release of a great deal of tension. Brahms spent at least fourteen years of his life in making this score - listen to this.
続きを読む
3人のお客様がこれが役に立ったと考えています
違反を報告
レビュー を日本語に翻訳する

Andrew R. Barnard
5つ星のうち3.0 A calm, polite Brahms 1st with no ideas or intensity
2013年4月23日にアメリカ合衆国でレビュー済み
Amazonで購入
It's an event to have a woman record the Brahms 1st, but what about the performance? Since Marin Alsop is probably our most famous female maestro, she's been publicized for achieving star status as a woman conductor. But being hyped doesn't produce greatness and I worry that much of her praise has been too generous. Is she praised for marking a cultural milestone or for her actual interpretations?

In the case of this Brahms 1st, I wonder if her fans are hearing things that aren't there. What Alsop has done is to drain the work of its tragedy and pathos and replace it with a calm, secure sense of confidence. It's Brahms without a care in the world. I don't think the symphony needs to be menacing, but while meandering in a garden of roses may be beautiful and fragrant, it doesn't do justice to a complicated symphony that asks for genuine ideas. The London Phil plays nicely but not phenomenally. If you like Brahms without conflict or sadness, perhaps this will sound fresh due to the clear textures, but others have made it through the symphony without muddying the lines.

Since Alsop's problem is blandness, the overtures don't need a separate diagnosis. I do wonder how Alsop thought her performance was supposed to give justice to the Tragic Ove, though. Here it's the Overture to a Bright Sunny Day.

I can't fault Alsop for sloppiness, but there my praise ends. This is an average reading in good sound, but there's a huge field of better performances out there from Bernstein, Karajan, and Rattle, to list some of my favorites.

Larry VanDeSande
5つ星のうち3.0 An average performance quite distant from greatness
2005年9月13日にアメリカ合衆国でレビュー済み
Amazonで購入
Marin Alsop is now probably the most-recorded woman conductor ever, having churned out regular CDs and having had her photo appear on the cover of most high circulation classical music magazines. For all the buzz about her, she demonstrates no individual trait that separates her from the crowd other than being the most well known female conductor in a man's profession.

Here she is equipped with one of the world's 10 best orchestras and takes on repertoire that puts her in direct competition with every conductor in history including the great, near great and mediocre conductors of the recording era. Based on the evidence presented on this CD, I do not believe she is up to that task.

Her performance of the Symphony No. 1 starts well with timpani supporting the downstrokes in the opening theme, making a clear statement about the serious message to come. However, things soon go awry as a too big timpani stroke clouds the picture during a bad changeover to the exposition.

Alsop next uses an ineffective contrivance that she repeats throughout this recording. She takes the quieter music much more slowly than the louder music, as if to say quiet equals slow and loud equals fast. She does this over and over throuhgout the symphony.

While this can enhance the music when handled like light and shade, Alsop's approach is more like black and white. It lacks subtlety and leads to more of a stop and go approach. Instead of enhancing the experience, it gets in the way. For me, this constant tinkering with pulse and motion is an annoyance.

Alsop fruitlessly takes the exposition repeat in the first movement, saying nothing more than, "Here is the music again." While composers add repeats to elongate their music and follow structural design, recreators are required to interpret repeats differently, to say something different with the same music when doing it a second time. Alsop does nothing more than repeat the music at the same speed and with the same accents. What's the point?

In addition, the playing of the London Philharmonic is not uniformly the best I've heard from that group during the dramatic first movement. There is little that is excellent in the second movement, as the wonderful clarinet interplay is -- like the rest of this performance -- good but not great. The violin and horn solos and duo are better at the end, although the violin is probably too meaty for this gentle music.

Alsop overinterprets the second movement "Andante Sostenuto", which translates to "at a sustained walking pace." Like most conductors, she takes the second movement as an adagio. The marking is more akin to what goes on at the beginning of the third movement, where Alsop leads an inspired reading and does her best work in the symphony.

The dramatic closing movement begins without ornaments from the strings, a mistake in my opinion. The following pizzicato is almost silent, a contrast in keeping with Alsop's differential speeds in the opening movement. There is frankly too much contrast here for the whole to be effective. In addition, there is more poor playing as the timpani doesn't quite match the orchestral downstrokes as it did in the first movement.

Alsop again fidgets with tempo in the quieter sections of the closing movement, then doesn't slow down for the descending scales at about 11 minutes, where a slower tempo would indeed be effective. She hustles right through this section as she does all the louder moments. A nice finish is not enough to save this performance from all its prior shortcomings.

The "Tragic" overture that follows has all the fingerprints of her work in the symphony. Alsop leads a highly nuanced and extremely well played version of the "Academic Festival" overture to close the CD. So this CD begins and ends well but, unfortunately, the 60 minutes in between is not performed at such a high level.

Even with modern DDD recording at Naxos's very inexpensive price, this is not an essential purchase for anyone other than fans of the conductor. You can pay about the same money on this Web site and get much better performances by Walter and Karajan (to name only two) that will give more lasting pleasure over a long term.

My favorite recording of this music continues to be the 1962 recording by Karel Ancerl and the Czech Philharmonic Orchestra, last seen linked to a bad mono performance of Beethoven's Symphony No. 1. I highly recommend that performance to anyone that wants to hear a dramatic realization of the Brahms Symphony No. 1.
続きを読む
18人のお客様がこれが役に立ったと考えています
違反を報告
レビュー を日本語に翻訳する
すべてのレビューを参照します
Amazonプライム会員ならお急ぎ便、日時指定便が使い放題
さらに、映画もTV番組も見放題。200万曲が聴き放題 。クラウドに好きなだけ写真も保存可能。
> プライムを無料で試す