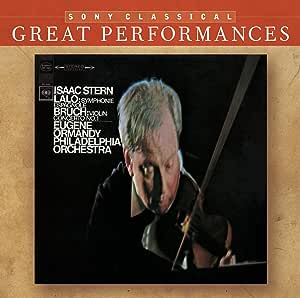 L. E. Roberts
5つ星のうち5.0 THE BEST PERFORMANCE
2008年12月10日にアメリカ合衆国でレビュー済み
Amazonで購入
I bought the LP (don't ask me how many years ago), and have been searching for it on CD for some time (I live in an apartment, and haven't been able to set up my huge stereo setup including turntable for some years). I bought the Pinchas Zucherman recording of the same pieces, and though it was well-played, it just wasn't the same. Upon seeing this album,, I immediately sent for it, and I was not disappointed. It is THE performance of these two pieces by Bruch and Lalo. If you are not an Isaac Stern fan, do not bother. There are some composers for whom I prefer other violinists, but when it comes to Romantic violin, no one does it better than Mr. Stern. If you buy it and don't love it, send it to me, and I will give it to a music appreciation course.
続きを読む
4人のお客様がこれが役に立ったと考えています
役に立った
フィードバックを送信中...
フィードバックをお寄せいただきありがとうございます。
申し訳ありませんが、お客様の投票の記録に失敗しました。もう一度試してください。
違反を報告
レビュー を日本語に翻訳する

Kevin Tan
5つ星のうち5.0 One of Stern's Best
2013年2月9日にアメリカ合衆国でレビュー済み
Amazonで購入
Isaac Stern was a legendary violinist who, in his latter years was more well-known for championing the careers of younger artistes like Itzak Perlman and Pinchas Zukerman, as well as for saving Carnegie Hall. This recording of Lalo's Symphonie Espagnole sees Stern at his sterling best. The playing is scintillating and his tone is ravishing. Never have I heard Stern's sound so wonderfully captured in this remastered version of this recording. This is absolutely the most outstanding Symphonie Espagnole out there bar none, and the disc is worth buying for this alone. The Bruch is very very fine, bested perhaps by only Heifetz and Oistrakh.
続きを読む
2人のお客様がこれが役に立ったと考えています
役に立った
フィードバックを送信中...
フィードバックをお寄せいただきありがとうございます。
申し訳ありませんが、お客様の投票の記録に失敗しました。もう一度試してください。
違反を報告
レビュー を日本語に翻訳する

VonStupp
5つ星のうち5.0 Stern and Ormandy in committed performances in great sound
2019年6月21日にアメリカ合衆国でレビュー済み
Amazonで購入
Max Bruch’s music has weathered the test of time compared to that of Edouard Lalo, the Symphonie Espagnole being the one tried and true piece of repertoire that is standard, otherwise, Lalo was a bit of a one-hit wonder. Lalo composes to the typical Spanish exoticism seen in Romantic music of the time: constantly shifting duples and triples, exotic mode shifts, snappy rhythms, although compared to the sunnier Spanish settings by Emmanuel Chabrier, Nicolai Rimsky-Korsakov, Isaac Albinez, Manuel de Falla, and Joaquin Turina, Lalo sets his “violin concerto” in d minor, an almost dour setting in comparison to those other Andalusian-tinged compositions. This five-movement concerto does explore a wide variety of moods however, from the extroverted brassy, nigh-upon Germanic opening, to the airy, spice-laden 2nd movement, to the off-kilter dance finale; the work as a whole gives plenty for violinists to show their artistic range and mechanical virtuosity.

Bruch’s music, although not of the historical notoriety of Brahms - Bruch’s main competition at the time, has a wide variety of symphonic, concertante, chamber, and choral music on record, the 1st Violin Concerto being one of the solidly great monuments of Bruch’s oeuvre. Bruch seems to revel in brooding minor keys, also featured in his 2nd Violin Concerto and Kol Nidrei for example, but the 1st is elevated by some bold orchestrations and winning melodic material, setting it firmly with other great concertos (like Dvorak’s major edifice, the Cello Concerto in b minor). The three movements of the concerto play out in superb fashion, the 1st with its ominous and relentless ostinato-ish bass line, the second with its gloriously valorous melody (oddly reminiscent of Richard Strauss’ Alpine Symphony’s blazing heroic theme), and the third movement with its majestic spring dance balanced up against yet another triumphant, leaping theme. As a composition, it is immediately attractive and an engaging listening experience, although I don’t care for Bruch’s use of unison ensemble settings, as his music loses a little power during those moments, but a minor quibble.

Generally speaking, the earlier the recording you can find of Isaac Stern the better, as Stern’s technical skill eased as he aged. In addition, compared to the polished, sweet sounding violin playing of today, Stern can be regarded as a blunt instrument for his incisive attacks and straight-forward, middle-of-the-road interpretations that jived well with the swifter, no-nonsense orchestral leading of the time (i.e. Szell and Reiner), and so it is here with his oft-paired Eugene Ormandy and The Philadelphia Orchestra, although I would consider Stern and Ormandy here vigorously involved and virtuosically adept. This Columbia/Sony recording from the mid-60’s finds both performers in good form in works that allow both performers to lay into the angsty, minor-keyed dramatic flourishes of these seminal Bruch and Lalo works. Stern is ready to dig in and lays into the severe moods with aplomb and Ormandy is right there alongside him replete with blustery brass, chattering winds, and pleasantly full strings. This Great Performances edition from 2006 is exceedingly clear, with Stern heard up close and Philadelphia caught in its Scottish Rite Temple with great sound across the board; there is no noticeable hiss or crampedness to the soundscape, a colorful and clear presentation all around with a pleasant fullness.

To compare to other performances, you can get a more lyrically polished sound from Perlman with Haitink/Previn and Cho-Liang Lin with Slatkin, more vacuous fireworks from Jascha Heifetz with Sargeant, more Romantic sweep in Tasmin Little with Handley and Maxim Vengerov with Masur, although the best bargain is in the very fine performances by Salvatore Accardo also with Masur playing all of Bruch’s concertos for violin and orchestra (Masur also offers Bruch’s complete symphonies as well). However, even that 70’s production isn’t as colourful or committed as Stern and Ormandy here on Sony; this disc is highly recommended for exemplary musicianship and fine recorded sound.