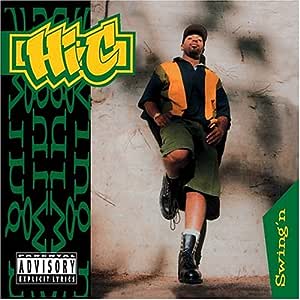 Tracks include: F**k a 40 Oz., Swing'n, Wannabe, Stank, What's Goin' On, Casha's Demo, Table Dance, Got It Like That, Bigger Da Betta, Getcha Grind On, Devil Made Me Do It, Stress'n, Shout to Ya, Get the Money, PhPh

Soul Groove
5つ星のうち4.0 Raunchy Fun By Quik's Homie
2007年6月28日 - (Amazon.com)
形式: CD
Hi-C comes back 2 years after his debut, 1991's Skanless. 1993's Swing'n is an interesting album with a neat mix of sex rhymes, some social commentary, some boasting, and some neat funky beats. Production is held by Hi-C, homie Tony A, and the Half Heads. My copy is the 2004 re-release with 2 bonus tracks. The album is a neat early G-Funk era album with dope production, raw at times, since it was made in '93. My favorite joint is "Got It Like That." The beat is raw and old-school style, with a great whiny synth, not unlike the ones Dr. Dre did on The Chronic and Doggystyle. The beat is phat and is fun to listen to. A neat social comentary track is "What's Going On" with a soulful beat and deeper lyrics about life in the hood. "The Devil Made Me Do It" is eerie, with a crazy, twangy beat. "Wannabe" is harder edged. The beat is phat with a broken whiny synth with a P-Funk sample, and Hi-C bucks down fake bustas who wanna be him. "F--- A 40 Oz." is neat; Hi-C would rather down a half gallon (64 oz) of malt licquor. "Stank" is raunchy about the women's spot, and I am not big about sex rap, but the woozy beat and whiny synth line is tight. Hi-C maynot be a great lyricist, but he is funny and entertaining, and the beats rock. The bonus 2004 tracks at the end are cool. Lyrically, not groundbreaking, but the songs are tight regardless. "Get The Money," is a lighthearted hustler track produced by DJ Quik. The beat is phat G-Funk updated for 2004. Ph Ph is the other bonus. The beat is another G-Funk smoker by Quik, and is a party starter. Overall, the album, original or rerelease, is a good listen, not flawless, but fun and funky.
続きを読む
レビュー を日本語に翻訳する

G$
5つ星のうち4.0 2nd solo from Hi-C
2005年2月22日 - (Amazon.com)
形式: CD
The Crawf Dog is back after 20 months since his great debut. Again this was re-released like his debut, in 2004 (the oriinal is from mid-1993 and the new one has 2 bonus songs at the end. It's about equal with his "Hi-Life Hustle" album, but not as good as his debut "Skanless". Like his debut, guests are few and production is decent for the time period. Hi-C produced 7 songs and Tony A produced 6, the bonus songs are produced by DJ Quik. Once again, as always, for Hi-C, it's packed with funny and dirty songs. It has one classic song, 9 good songs, 4 that are ok, and one I skip. A must have album for his fans or fans of dirty funky rap like DJ Quik or Too $hort.

BONUS TRACKS NOT ON ORIGINAL ALBUM

check all my reviews